People are always asking Karl Subban how he raised three sons – P.K., Jordan and Malcolm – that all became professional hockey players. The answer is in the long-time teacher and school administrator's new book, How We Did It: The Subban Plan for Success In Hockey, School and Life. The Globe and Mail's Dave McGinn sat down with Subban to discuss the best kind of sport parents, how to boost enrolment in hockey across Canada and how to help children achieve their potential.

Tell me about your idea of the "GPS," and how parents can nurture it.

The GPS stands for "growing potential system." I really believe that every child comes into this Earth with this GPS that needs to be programmed. Potential is like a three-legged stool. In the seat of the stool, write "potential." One leg stands for "dream." It's really important that young people, all of us, have a dream. The second leg is "belief." You need to have a fortified belief system that can stand up to our doubts. And the third leg stands for "action." A lot of times we have a dream, but we don't make it actionable. That's how we go about helping children to develop their potential.

What's the most important quality for a hockey parent, or any sport parent, to have?

Unconditional love and emotional support. You don't love them because they score a goal.

What's the worst quality a sport parent can have?

It's the elephant in the room, which is winning. There is way too much emphasis on winning and not enough on development. With the boys, after a while I didn't care how they played in a game, even though that was important. But if they missed their power skating or their shooting practice, I would be so agitated, because practice makes you better. But as parents, we live for the wins.

There are so many ideas of how to raise kids these days. You describe yourself as a "lifeguard" parent. What does that mean?

There are three parenting styles. One I call "autoparenting," like a plane is on autopilot. We have these children who are not getting the necessary support and attention they need. Their parents are missing in action. These children are on their own. The second parenting style is "designer parenting." These parents are like the movie director – they're writing the script, they're creating the scene.

Then there is the "lifeguard parenting" style. You teach your child how to swim and then you take off. You're like a satellite above. If they need help, you can step in.

You say in the book that it's okay to make a kid pursue your dream as long as it eventually becomes their dream. How does a parent know when to back off?

There's a great quote I use a lot: "Clear the way, pave the way and get out of the way." You have to know when to get out of the way. If my kids didn't want to be hockey players more than I wanted it for them, guess what, it wasn't going to happen.

Hockey enrolment is down in Canada, in part because of concussions and fear of injury and partly because of cost and cultural barriers. What do you think leagues should be doing to boost numbers?

Education is the key. With coaches, with players. … I think, too, that kids today, there's so many other things to occupy their time. I think they need to find a way to make the game fun. We need to find a way to grab the attention of youngsters. And the cost of hockey is just slowly excluding so many from playing Canada's game.

If any of your kids had suffered a concussion when they were young, would you have let them keep playing?

Now we know so much more about it. People around us were not trained to detect concussions. So chances are I would say "just shake it off." But today, because of education, we have a lot more education around head injuries, so that will help. You have to have rules to protect players.

What do you do if your kid is perfectly happy aiming low and being lazy?

One of the things I said to teachers at my school was, "The bar you set is the bar they achieve." Kids will do nothing if we allow them to do nothing. Chances are they'll do what you want them to do if you do it with them.

What are your biggest regrets as a parent?

If I had to do it over, my kids would do a lot more chores. [They teach] really important life skills. What you learn to do at home will take you far in this world.

Do you think parents today put too much pressure on themselves?

There's this guilt that we have as a parents: Are we doing the right things? Are we doing enough? But to me, I see the greatest things that parents face is a lot of parents don't want their kids to face adversity. And that is so important to their development and growth. You have to go through something to become something.

So what to you think of participation medals?

What boosts your confidence is hard work and achievement. If you take a helicopter to the top of the mountain or you climb the mountain, which one is going to bring you more satisfaction? 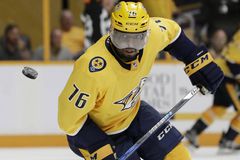 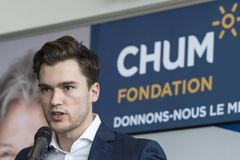 Predators captain Mike Fisher retires after 17 seasons in NHL
August 3, 2017
Follow Dave McGinn on Twitter @Dave_McGinn
Report an error Editorial code of conduct
Due to technical reasons, we have temporarily removed commenting from our articles. We hope to have this fixed soon. Thank you for your patience. If you are looking to give feedback on our new site, please send it along to feedback@globeandmail.com. If you want to write a letter to the editor, please forward to letters@globeandmail.com.
Comments