"In a good classroom, there's a buzz of engaged energy," says Geraldine Mabin, a Mary Poppins of an educator with a slightly faded British accent and a look of calm concern that could make anyone sit still in her seat.

She understands the heightened anxiety of parents as another school year begins; how they want to ensure their child is in the right school, in the right classroom with the right teacher.

But as an internationally recognized leader in the field of early-childhood education, she also knows the expectations of from both teachers and parents that can undermine a child's natural ways of learning.

The healthy classroom is not always what modern parents assume it is.

Dressed in casual clothes, Ms. Mabin has the manner of a tall, graceful bird who watches others with patient but intense expectation to ascertain the nature of their interests. Now 71, she has spent more than 50 years in education, and has no plans to stop any time soon, partly because she feels there's still much to do to create healthier, more effective learning situations.

A consultant to several schools, including one in Abu Dhabi, she is co-founder of Words in Motion, a Toronto-based not-for-profit organization offering arts-based educational programming to public and private schools.

"I'm still working because I love the energy that children bring to things," she says, lifting her eyebrows as though surprised anyone would wonder why she might want to retire.

Considered one of Canada's most innovative early-childhood educators, she worked as a teacher, then principal at the University of Toronto's Institute of Child Study after immigrating from Devon in England.

In 1980 she founded the Mabin School, which remains vibrant today but was considered highly experimental when it was in the vanguard of alternative schools. Its loose, art-based learning environments from JK to Grade 6 were described by one teacher as: "Our pattern is to have no pattern."

After 18 years at the helm, Ms. Mabin, who never married, left the school to help start the Children's Own Museum, an initiative with the Royal Ontario Museum that fizzled five years later due to funding problems.

Words in Motion began in 2004 after the demise of the museum project. It reflects Ms. Mabin's passion for bringing her understanding of how children learn to more people than just those who can afford private school.

The programming she designs uses music, acting and role-playing to tell stories that accomplish curriculum objectives. The Friendship in Action Workshop, for example, encourages role-playing to help children understand social challenges such as bullying. Their initiatives have reached more than 37,000 students.

"You can teach empathy," Ms. Mabin says, as flatly as a command to take out one's pencils.

There are many gifted teachers in both public and private systems, she emphasizes, but what worries her most is the rigidity of the typical classroom teaching style. "Time in the classroom for actual learning as opposed to teaching is shrinking," she says. "There's a very high expectation on academics and testing. A lot of time is spent on drumming in lessons and worrying about kids who haven't made it. Children should be given time to learn things, to not be pushed."

The fast, technology-driven world has increased our expectations of instant gratification and immediate results, she says. "Somebody, somewhere has got to be able to put the brakes on."

She adds that for many years, teacher training in Ontario has been only eight months long, while two years is the norm in some provinces, and in some countries considered leaders in education, such as Finland and Sweden.

"[Teachers]shouldn't just be taught what to teach, but how children learn though play, through trying things out, though supposing and testing," she says. "All the resources are at their fingertips. But if they did understand how children learn, you would not see classrooms running on half-hour periods, each with a different unit. You would see more integrative, collaborative learning."

A good teacher creates an environment in which it's safe for the child to take risks, she explains. "Children have to take risks and know they're not necessarily going to be right."

But a creative learning environment doesn't preclude the more traditional teaching methods. "It doesn't serve kids to say you don't have to do this," she says, meaning the rigours of spelling or times tables.

In fact, it's a balance of creative and traditional teaching that works best.

"One little test is the way children move around the school. If there's a burst out of a room and they're noisy, that's often because they've been kept under wraps. They should be the same out of the classroom as in it."

But if trust is required between teacher and child, the parent also has to take "a leap of faith" with the teacher and carefully judge when a situation requires intervention.

Not having their friends in the same class is not the end of the world, for example. Nor is a teacher who is very strict. "Children are resilient," Ms. Mabin instructs. "Sometimes when they have to learn to adapt to a situation, that's a good thing."

In closing, she offers a final lesson every helicopter parent should absorb: For all the worry, it should be comforting to know that one year of less-than-ideal teaching is "not going to make or break the child."

I moved my kid to the class all her friends weren't in
September 1, 2011 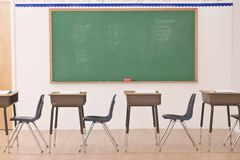 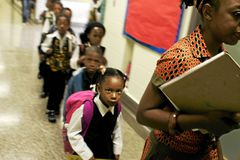