There is a story Mary Gordon tells about Roots of Empathy, the education program she created that brings infants into classrooms to teach schoolchildren the basic value of fellow-feeling.

It involves a teenager named Darren, a boy who had survived a violent childhood and numerous foster homes. At 14, he was still in Grade 8, the only kid in his class with the beginnings of a beard. As with all Roots of Empathy classes (the program began in Toronto in 1996 and has spread around the world), a mother brought her infant to meet the students over the course of a year, so that they can use the baby to identify and understand emotions.

Darren asked if he could hold the baby, and the mother, slightly anxious, handed her son over. He rocked the child for a few minutes, and then asked: "If nobody has ever loved you, do you think you could still be a good father?"

And that, to Mary Gordon, is success – or at least the on-ramp to success. Here was a teenager who would normally disdain any talk of "love" admitting not only that it existed, but that he might be entitled to it, just like everyone else.

More than half a million kids have been through Roots of Empathy, 65,000 in the last year alone. Every school district in Scotland uses Gordon's program, and it's also been taught in New Zealand, Australia, Germany and the United States, as well as every province in Canada.

"School is the universal access point," she says, sitting in her office in a dreary industrial park in north Toronto. It hardly seems large enough to contain her enthusiasm, let alone a staff of 30. "We're all predisposed to empathy. But it either blooms or fades. That's not to say it can't be rekindled later, but it's a lot harder."

Gordon's favourite exclamation appears to be the word "grand!" (In Ireland, she's taken for a local; her accent hasn't been lost even after four decades away from Newfoundland.) At one point, she cocks an ear when there's a burst of laughter outside the door: "A belly laugh a day, that's what's required to work around here."

The study of empathy, long seen as cuddly but not terribly rigorous, is now a burgeoning academic field. The primatologist Frans de Waal, who studies co-operation in the animal kingdom, said that until recently "it was in the category of telepathy or astrology." Not any more: de Waal is featured, alongside Gordon and other educators and scientists studying empathy, in a new documentary by Alex Gabbay called Love, Hate and Everything in Between. (On May 9, filmmaker Sarah Polley will host a screening of the film at the TIFF Lightbox in Toronto, after which CBC broadcaster Jian Ghomeshi will moderate a discussion with Gordon and the documentary's director.)

A paucity of empathy certainly seems to be a problem in the Western world, which abounds in everything else. The stories of teenagers like Rehtaeh Parsons and Amanda Todd, traumatized and ultimately suicidal, stir the nation's conscience. Social media sometimes seems a lawless frontier town. Parents are worried.

"They're right to be worried," says Gordon. "There's a whole issue of managing social media and kids not understanding the impact of their behaviour. ...

"To be fair to them, sometimes they're just not cognizant of what they're doing. You can't put an old head on young shoulders. But this idea of being spectator to a rape or some sort of degradation and laughing and dehumanizing that person – that's an empathy problem."

But what to do about it? How do you teach children to recognize their impulses, and act on the better ones? Gordon would say: Start young, and start with a baby. In a Roots of Empathy class, a local mother brings in her infant, who is two to four months old when the program starts and places the baby on a blanket. The students, from kindergarten to Grade 8, observe the baby and how his emotions inform his actions. Does it want to be picked up? How would they describe that expression?

In a way, the baby is only a jumping-off point: An infant who is wriggling around, irritated because he can't sit up, might prompt the children to think about how frustrated they are with sports, or math.

"The children find the humanity in the baby and then apply that to themselves," Gordon says. "They learn who they are, their own temperament traits, the names of their feelings. They talk about a time they felt like the baby – when they felt cornered or disappointed or happy or embarrassed."

Lest this all seem too airy-fairy, Gordon is keen to point out nine studies that have evaluated the program and show measurable improvements in students' engagement with each other, including one by the government of Manitoba revealing that the Roots of Empathy graduates were less aggressive than their peers three years after they'd taken the course (the program is provincially funded in Canada). Researchers at the University of Washington are currently studying the brain activity of Seattle school children taking part in the program.

Gordon's own story began with a tin can on a table, and some ex-cons at the door. When she was a child in St. John's, her father, a deputy minister in Joey Smallwood's government, kept a can on the dining-room table. His five children (journalist Gwynne Dyer is Gordon's older brother) were expected to put change in it for the needy. Their mother fed newly released convicts, and the children were enlisted to entertain them at dinner. There was an unspoken belief, she says, "that your happiness should include the happiness of others."

After three years at Memorial University, Gordon left for Toronto, where she met her future husband and began teaching kindergarten (they have two grown children). In 1981, she went out into Toronto's underprivileged neighbourhoods – carrying a borrowed baby to make herself seem less threatening – to make contact with vulnerable young mothers. That led to the creation of a series of family-literacy centres, which are still operating today.

While Gordon can point to Roots of Empathy's international success, she seems to find the most satisfaction in individual stories. One boy in Toronto, for instance, admitted to his Roots of Empathy peers that he'd stolen UNICEF money at Halloween. They praised him for having the guts to confess, and offered to help him pay back the cash.

And in a truly unimpeachable sign of a breakthrough, several parents have said their children are better at sharing the TV remote. "Now there," Gordon says, "is your hope for world peace."

Canada ranks poorly in survey of the state of parent/teen bonds
May 5, 2013 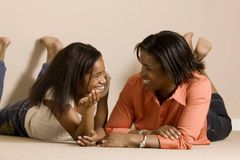 new
Ottawa woman gives autistic son to government after long delay for care
May 1, 2013
Ask your mother: Tell us your mom's best advice
May 1, 2013
Follow Elizabeth Renzetti on Twitter @lizrenzetti
Report an error Editorial code of conduct
Due to technical reasons, we have temporarily removed commenting from our articles. We hope to have this fixed soon. Thank you for your patience. If you are looking to give feedback on our new site, please send it along to feedback@globeandmail.com. If you want to write a letter to the editor, please forward to letters@globeandmail.com.
Comments