On a padded play mat in a Toronto apartment, Catherine McDermott is playing with 16-month-old Ryian Younis. Ryian wiggles on his belly to reach for a plastic jack-in-the-box.

As Ryian whacks an orange door closed, McDermott explains to his parents that this is known as a cause-and-effect toy. Because of the muscle control challenges of his cerebral palsy, Ryian isn't sitting up to play this game, but he is getting the job done. She tells them mastering closing the doors is the first step.

"The rest comes by accident, when we allow it to happen on its own. If we pop them for him, it could take longer," she says.

These weekly one-hour home visits are part of a program run by the Holland Bloorview Kids Rehabilitation Hospital, serving kids who were born prematurely, have disabilities or delays from birth. Services can include physiotherapy, occupational therapy and speech and language development. But as an early childhood educator, McDermott's role is to help Maya Younis and her husband, Mostafa, understand how to play with their wide-eyed, happy boy – and celebrate incremental achievements that research is showing is critical for long-term success.

During McDermott's visit, she explains that crinkling paper is a "great hand skill," holding a ball before tipping it onto a jar uses a "tripod hold" and "voluntary release." She suggests that Ryian's "pincer" grasp – a skill that can lead to buttoning shirts or holding a pencil – can be developed by playing beading games with smaller and smaller beads.

Her top goal today, however, is to have fun. When the challenge of balancing his body seems to be too much, she and Younis strap him into his high chair. Without having to worry about where his body is going, Ryian relaxes and grabs at the motorized butterfly wandering across the tray top.

Disability experts say this play-based approach is crucial for kids with disabilities and can be tweaked so that the playing can, for instance, come before the sitting – or whatever other milestones a child hasn't mastered.

This play-based approach is a significant shift from the strictly bio-medical notion of "fixing" children, says Dr. Peter Rosenbaum, a professor of pediatrics at McMaster University and the Canada Research Chair in Childhood Disability.

In a recent paper, Rosenbaum wrote that the word "fix" should be jettisoned in favour of a number of other "f-words," including family and fun, which emphasizes what's possible, not what's broken. "To the extent that play enables and empowers and encourages kids to do things and to the extent that parents see their children with disabilities being capable, it changes the whole equation," he says.

That seems to be the case for the Younis family as we watch Ryian smile, gurgle and clap his hands when he succeeds at a play challenge. "I learn something every time," says Younis, watching intently.

Ryian was born at just 23 weeks gestation in June, 2011, and after a brain bleed he was left with cerebral palsy. Leaving the NICU with her tiny son, she says felt like walking out into a different country. "I cried, I didn't sleep. If it wasn't for Catherine, I would still be there."

She says the family's time with McDermott is the only time her son isn't labelled "different". Indeed, during this visit, McDermott gently deflects any questions about what Ryian should be doing at this age. "He's on the right path," is her refrain.

Researchers admit measuring success can be a challenge. Rosenbaum cites a landmark randomized study in the late 1980s with kids ages 12 to 19 months with cerebral palsy. It found that kids whose treatment included just six months of an infant development program like Ryian's, in addition to more traditional physiotherapy, had better motor skills than those who had not.

Early intervention expert Lisa Chiarello, of Drexel University's department of physical therapy and rehabilitation sciences in Philadelphia, has said that play gives all kids a reason to learn, but that can mean something dramatic to a child with a disability.

"Children are more apt to to practise walking up stairs on the playground jungle gym to reach the slide than going up and down the therapy stairs that lead to nowhere," she wrote in a newsletter.

Rosenbaum likes to use the term "mischief" in urging therapists and parents to encourage a child to move in their own way, touch things – even break things – the same way any infant or toddler does. "Not because breaking things is a good idea, but that's how you learn."

Back on his playdate, Ryian is making a little mischief of his own. McDermott offers him a wooden spoon and two large plastic rings to bead on it. As she's telling his parents that it's a dollar store purchase that will help develop fine motor skills, Ryian dumps the rings and starts tapping the floor. "And, it becomes a drum stick," says McDermott, smiling, but not correcting him. 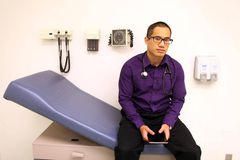 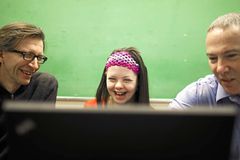 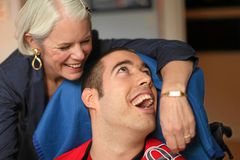