When she was just a few weeks pregnant, Tracey Steer had an appointment with her gynecologist. When he asked if she was drinking wine, she said yes.

"He gave me the stink eye and was all upset about it, so I stopped telling him that I did," she recalls.

Wine with dinner was part of her Montreal lifestyle, Ms. Steer says, and she didn't want to give it up during either of her pregnancies. Seven years later, the 38-year-old has two kids she describes as bright, charming and delightful.

Since the first research on fetal alcohol syndrome (a condition that can involve physical defects, behavioural problems and learning disabilities) in the seventies, most baby books and obstetricians and gynecologists have reached consensus that expectant mothers shouldn't drink.

In fact, the study of 11,513 children suggests that the ones whose mothers drank once or twice a week were 30 per cent less likely to have behavioural problems than children whose moms were sober throughout pregnancy.

But the findings of the study - led by London epidemiologist Yvonne Kelly from the University College London - are complex.

Dr. Kelly and her team looked at mothers - all of whom participated in the major Millennium Cohort Study - who were light drinkers (one to two units a week), moderate (three to six a week) and binge or heavy (seven or more a week), as well as women who never drank and those who abstained from drinking during pregnancy.

When the children were 5, researchers tested their behavioural and intellectual development.

While the children whose mothers were light drinkers did better than those who abstained, the takeaway message isn't that drinking is good for the fetus, Dr. Kelly says.

Expectant mothers who were heavy drinkers had children "who were more likely to have hyperactivity, conduct and emotional problems" than those born to mothers who didn't drink at all, the study notes.

Another important consideration: "The children whose mums report drinking low levels are more economically and socially advantaged compared to other groups," Dr. Kelly points out.

If children grow up in such a milieu, says Gideon Koren, director of Toronto's Hospital for Sick Children's Motherisk program, "they're generally more resilient kids."

Dr. Kelly says guidelines have been written for pregnant women based on research into the negative effects of heavy drinking.

"It wasn't until recently that people started to look at moderate or low levels of alcohol consumption," she says. "It's politically, morally and emotively charged."

Ms. Steer, a stay-at-home mom and blogger, grew up with a father who was an obstetrician/gynecologist so she wasn't nervous at all about pregnancy. She found books such as the famous What to Expect When You're Expecting to be fear-mongering "malarkey."

They told her not to dye her hair, use a sauna, eat salami or drink a drop of alcohol - behavioural changes she said were unnecessarily extreme.

"I just think that's made people hypersensitive about what they can control. I'm not saying that you can't control fetal alcohol syndrome - of course you can - I feel like there are people who don't enjoy their pregnancies because they abstain from things they normally like to do," she says.

Because she imbibed now and then, she says, she was able to relax and enjoy her pregnancies.

"If you're worried about [the effects of drinking] that's the worst thing," Ms. Steer says. "The stress is probably worse than the alcohol."

But Dr. Koren says not enough research has been done for women to take such liberties with drinking if evidence supporting its benefits isn't conclusive.

"There's something very spoiled in that type of argument," Dr. Koren says. "Unless it conveys benefit - vitamins and maybe unsaturated fatty acids - then I do not concur with that claim," he says.

"How much is too much when we don't know the true threshold?" he asks. "It's a matter of being precautious."

Alcohol can lessen the pain of arthritis
July 29, 2010 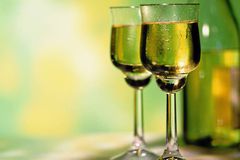