There are times when Amanda Telford suddenly notices the quiet in her house, and feels the familiar flush of worry, and the same question shouts in her head like an alarm buzzing: Where's Philippe? For 19 years, quiet in her Ottawa home meant trouble. Trouble like Philippe overflowing the bathtub. Or ripping off his closet doors. Or wandering out of the house into traffic.

There is silence in the house now, because last week, Telford brought her son, Philippe, to a provincial government office, told him she loved him, and left him there, with a note explaining why. It was a drastic decision, which is why it made headlines around the world. Mothers are not supposed to abandon their children to strangers – they are not supposed to feel there is no other choice. Amanda Telford and her husband, Alex, spent two decades protecting their son, fighting for him to get help in a crowded health-care system. And, in the end, to keep him safe, she left him on the government's porch step. She told him he was going to "camp," because that is a place he loves. He didn't understand what she really meant, or why she was shaking as she walked away.

"We didn't want this," she says, sitting on the couch in her living room. Philippe has been gone for seven days. "It was the most difficult decision you can possibly make. We had done everything we could do.… We have nothing left."

They were desperate: Philippe, who has autism, can't speak – he nods his head or points at pictures to communicate – and he cannot be left alone, not for a minute. He sometimes bangs his head so hard against the wall that he leaves a dent, and his hands are scarred where he has bitten himself. When he was 16, he was diagnosed with insulin-dependent diabetes, which suddenly limited the respite care his parents had been getting – due to regulations, staff at most of the homes could not administer his needles. Philippe's needs were higher, but they were getting less help; "It was almost like driving off a cliff," says Telford.

Philippe goes to school each day, but Amanda and Alex took turns watching over him at night. They never went out; "I would feel guilty if I left Alex alone too long," says Telford. "We couldn't even go to the bathroom."

It was one thing to care for a little boy, who silently spent long spells lining up his toy cars, or flicking the light switch up and down. But Philippe, as his mother describes him, is the size of "an NHL defenceman," with the impulsive personality and "bounce of Tigger in Winnie the Pooh." Although affable most of the time, he was getting more aggressive, slapping "hard enough to leave a mark" when his mother tried to stop him from binging on the bananas that would spike his blood sugar. He started disappearing from the house, or sleepwalking, prompting panicked searches. In March, while she was driving on the highway at 100 kilometres an hour, Philippe opened the door of the car for no reason, and almost fell out. "He was flailing to close the door, and there was not a thing I could do without causing an accident."

His 18th birthday created a new problem: For adults, there are even fewer respite beds and resources. His parents, who had been hoping for a group-home placement, were directed to waiting lists with placating phone calls from politicians and health-care officials. This winter, a respite room opened up on a locked Alzheimer's ward of a seniors' residence, which had a nurse to give him insulin – the best the system could manage. But the staff called Alex and Amanda to bring him home four hours after they dropped him off. He was going into other rooms, stripping and putting on the clothes of the residents.

In Philippe's bedroom, his mother sits on the bed, telling his story, and hers. It is a spare room, painted aqua, because the colour soothed him. The closet doors are off their hinges, there are holes in the wall where pictures had hung until Philippe threw them down the stairs. But in the corner by the window dangles a butterfly mobile. There are two fluorescent dolphin stickers on the wall. "He must like the way they glow," says Telford, as if guessing a riddle.

When Philippe was diagnosed with autism at age three, they were determined to give him as normal a life as possible. Between nursery programs and then school, they covered off his days, with Amanda working night shifts as a social worker and Alex working days as a public servant, and grandma filling in the gaps. Along the way, they had a daughter, who is now 16. They marked the milestones every family does: Seeing Philippe off to kindergarten on the bus, watching with proud surprise as he shook hands with the principal during his Grade 8 graduation.

His mom remembers how he lay his head on her lap while watching TV and insisted on a head massage. He shrugged off hugs but enthusiastically gave high-fives. But his family knew what was coming: In two years, Philippe would be too old to attend school, and they would end up on another waiting list for a day program – or forced to pay more than $100 a day for private care. And then, on April 29, he and his mother spent seven hours in emergency after he accidentally finished off a bottle of pills. He was home barely two hours when he left the house and tried to break down the door of a neighbour's house in his confusion; the police brought him home. Overwhelmed and dealing with their own health problems – Amanda is off work on sick leave – his parents made a decision.

"Parents of autistic kids have pretty thick skins. We're like bulldozers," says Telford. "I couldn't be a bulldozer any more." It was only a matter of time, they thought, before something terrible happened to their son.

"We have been doing this battle for years," she says. "We had done everything within the system." But it was not enough. So last Tuesday, by leaving Philippe at the development-services office with the workers who had his file, they gave the system no choice but to make room for him. Telford knows she's not alone: At the grocery store, another mother shopping with an adult son with a disability tearfully thanked her for going public.

Philippe is now in a temporary care home, waiting for a permanent place. His parents visit him every couple of days. They are trying to sleep without worrying. But in the middle of the night, when she walks by his room and sees his empty bed, she still feels the same old heart-skip: Where's Philippe? That's why she tells his story to anyone who will listen. Her family, and many others, need all of us to ask the same question. 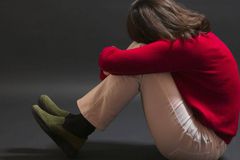 new
Ottawa woman gives autistic son to government after long delay for care
May 1, 2013
The 'swamp' of autism: a challenged marriage and a child without a voice
March 26, 2012
Follow Erin Anderssen on Twitter @ErinAnderssen
Report an error Editorial code of conduct
Due to technical reasons, we have temporarily removed commenting from our articles. We hope to have this fixed soon. Thank you for your patience. If you are looking to give feedback on our new site, please send it along to feedback@globeandmail.com. If you want to write a letter to the editor, please forward to letters@globeandmail.com.
Comments