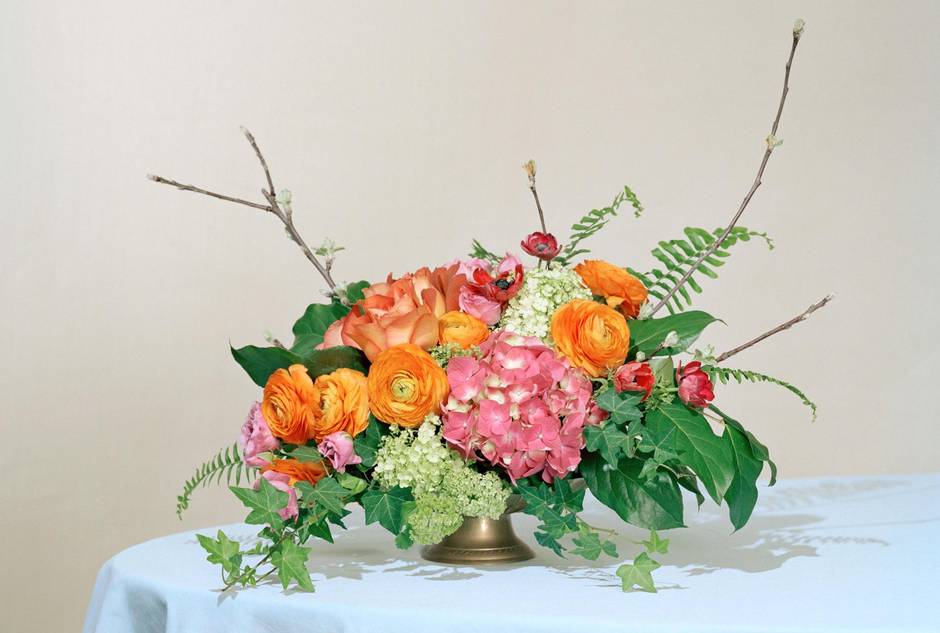 Of all the subjects on Instagram, who would expect that #flowers would be trouncing #kimkardashian 18 to one. And yet floral arranging, the traditional pastime with a mumsy reputation, has in fact, over the past several years, built up considerable cachet in style’s inner circles.

In part, that’s because floral arranging has found a younger audience, and a hip league of champions – including Taylor Tomasi Hill, street-style star turned flower-shop owner, and Sarah Ryhanen and Nicolette Owen, the thirtysomething founders of Brooklyn’s popular, and influential, Little Flower School, which has been instructing classes full of design-savvy New Yorkers on the art of the modern floral arrangement since 2009. 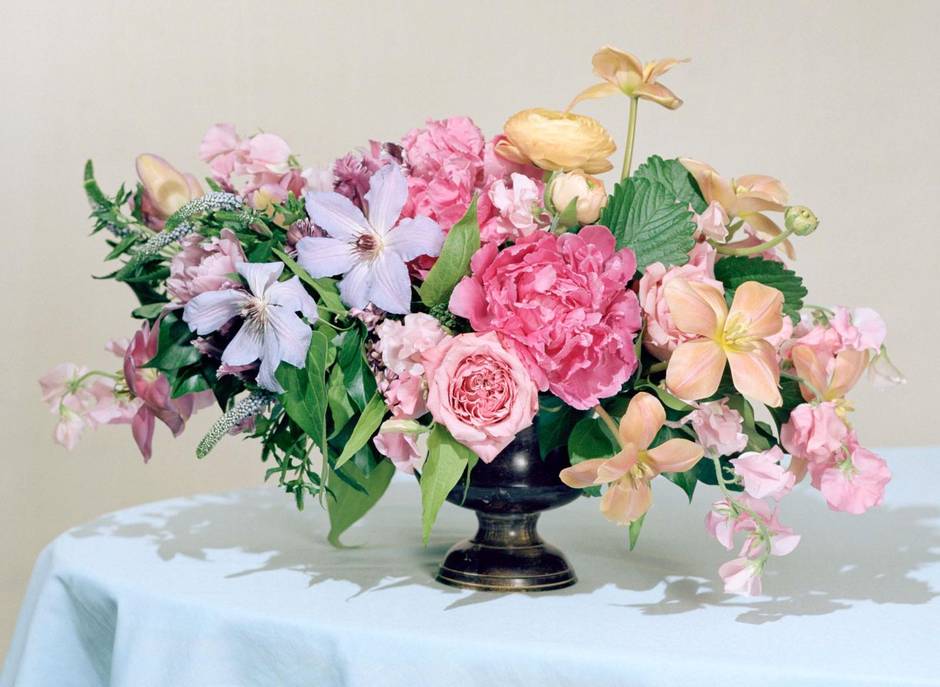 But what’s more surprising, and far less talked-about, is that, among the many artful arrangements winding their way through Instagram, Pinterest and Tumblr accounts, a very specific aesthetic is asserting itself: a low, wide, asymmetrical grouping that is nothing like the tidy Martha Stewart bouquets that dominated in the 1990s. Now, airy and elaborate mixed compositions erupt from low-footed urns and nearly spent-looking blooms reach in all directions alongside stray tendrils and vines. This distinct style, which appears over and over, calls to mind Dutch and Flemish botanical paintings of the 16th century, which may seem like an unlikely source of inspiration for modern hipster-florists – until you start to do some digging.

In the 16th century, flower bulbs were so rare and expensive that it was more economical to commission a painting of an arrangement than to own fresh blooms. At the time, the fashion for free-flowing arrangements like those depicted in the paintings of Jan Brueghel and Jan van Huysen were part of the new “taste for nature” and “glorious irregularity” championed by English garden designer Batty Langley, as Mary Rose Blacker writes in Flora Domestica, her social history of flower arranging. In its heyday, the Dutch style deliberately combined disharmonious colours and, unlike later tall and stiff Victorian styles, had no symmetry or central point. “Wild flowers and grasses from the field were also included,” Blacker notes. “Some flowers were purposely placed facing backwards and sideways…they were not crowded in the vase – the aim was to make each bloom clearly visible.”

At the time, Dutch merchants were gathering exotic specimens on their far-flung journeys, pollination botanist Stephen Buchmann explains in his engaging new cultural history The Reason for Flowers (to be published in July by Scribner). The images in these paintings were idealized and not literal – not only because the artists exaggerated details like stem length but also because they were painted over months and years and combined favourite varieties from different blooming seasons. “They didn’t have greenhouses or FedEx,” Buchmann explains by phone from his home in Tucson, Ariz., “so they created these phantasms of blooming flowers that in reality could never have been put together in the same vase.”

Jan Brueghel the Younger’s Arrangement of Flowers (left), c. 1620, celebrated the ‘glorious irregularity’ of nature (The Norton Simon Foundation). The revival of this look can be traced, in part, to Brooklyn’s Little Flower School, where leagues of stylish young types sell out the popular Dutch Masters flower-arranging class (Jennifer Causey).


The resurrection of this look today can be traced to Ryhanen and Owen, whose “Dutch Masters” class, which takes five hours to complete and costs $650, consistently sells out. But there are several theories as to why the aesthetic is resonating so broadly with a younger generation of florists. Horticulturalist and landscape gardener Tina Riddell, who owns Living Fresh Flower Studio & School in Kitchener – and was recently awarded a spot on Canadian Florist Magazine’s influential Top 40 under 40 list – credits a renewed interest in sustainability as a driver of the trend. Riddell, who has been a proponent of the style for several years (and who, by coincidence, recently attended the Little Flower School’s Dutch Masters class), explains that, particularly in the United States but also in Canada, forward-looking florists are taking an active interest in their supply chain. “They’re paying more for [plants] that haven’t come into contact with pesticides and fungicides that are banned in the U.S. but are still allowed to be sprayed in South America,” Riddell says. “We want things to be – and look – more organic. Sometimes I will leave a leaf on [a stem] even though it has a chew mark, because it’s adding that naturalistic truth. A bug came into contact with the leaf – why not share that part of the leaf’s history?”

“I don’t even want to call it a trend,” says B.C. florist Clare Day of the artfully imperfect Dutch-masters style, “because I really feel like it’s a completely new direction in design.” Day owns and operates the Red Damsel flower farm near Victoria and teaches workshops in arrangements made from foraged plants such as wild dogwood and lilac. She focuses on growing more delicate and less readily commercial varieties such as Café au Lait dahlias and hellebores. Call it the farm-to-centrepiece movement, with small-scale growers investing in their own cutting gardens for interesting varieties of peony and ranunculus, or unusual tulip varieties that the larger commercial suppliers don’t offer because they don’t ship well or aren’t ‘pretty’ in a mainstream way.

When it comes to arranging, she takes what could easily be described as a Renaissance approach: “It’s not just about gathering materials from nature but about really observing how the plants grow naturally, the way nature naturally organizes itself,” Day says. “If you look at a garden, and let it go for a year, there will be all these places where you will have small focal points, places where your eye is naturally drawn and travels throughout the garden.” It’s an appealing unruliness that she attempts to convey in her arrangements.

The same haphazard effect, as historian Blacker notes of the original craze in her book, might look hurried or wild, but it isn’t. Day concurs. When she creates these arrangements, she says, “it’s actually very calculated, where flowers get placed, their size and the angles of the asymmetry. There is actually a lot of intentionality that goes into something that looks kind of unruly.”

When Day got into floral design four years ago, she started with Ikebana, the Japanese approach. “Some of that still comes through in the asymmetry], but also the notion of wabi-sabi,” she says. It’s the philosophy of acceptance and the beauty of imperfection. “And that’s what nature, what a garden, is.” Why not a floral arrangement, too.