I have decided that my child is ordinary. Gloriously ordinary. And that's worth celebrating.

Like most parents, when my child was born I was keen to observe and boast about all his "special" traits. How was he exceptional? What awesome genes did he win in the great Chuck Darwin sweepstakes? And, above all, how was my exceptional parenting bringing out the best in him?

Not that I had much confidence in my parenting. Quite the opposite, as is often the case when someone has something to prove. I just knew that I didn't want to do what my parents had done, leaving me at the mercy of parenting advice books and the judgmental looks of women in the grocery store.

Parenting is hard. But we'd chosen what could be the most labour-intensive, exhausting and masochistic approach to it possible. It nearly destroyed my health, marriage and career.

My baby crying for a nanosecond was a calamity, and proof of my failure as a mother. I would hold myself in the same position for an hour to avoid the risk of disturbing his nap, lest his brain development be slowed. Any infant stimulation that wasn't one-on-one (such as an ExerSaucer, glorious thing that it is), was substandard. And I didn't dare leave our son with a sitter, which meant my husband and I did not have a real evening out until our child was more than a year old.

Eventually we put our kid in a private daycare that we couldn't actually afford. Institutions like that extract a lot of money from parents who want something "special" for their special kids.

I didn't bat an eye when other parents chose a less intensive (read: balanced) approach to parenting. I just quietly looked down on them, and went about my special treatment for my special little boy.

But do we really want a kid who is special? The word can mean many things. There's special as in special needs, then there's special because of some amazing talent or quality, which really translates into "Better than your kid."

I don't believe that "Every kid is special in their own way." That's cheating. The word "special" has then lost its meaning.

I noticed this the day I looked at a collection of photos on the wall at my son's daycare, with the title "You're Special" placed over top. I tried looking at each one while thinking, "… and you're special too." By the 20th kid, I couldn't keep fooling myself.

My child is special to me, of course. But how could he possibly be special in the vastness of life? Why should he be better than any other little one? Unique, yes. Loveable, yes. But special?

The dark side of special has a special kind of bite. A while ago, a daycare provider took me aside to talk about my son's vehement protest over the music they had been playing during the day. A few days later, he was left behind from a field trip because he protested against the chore of putting on his snow pants with the brute force of a baby Tyrannosaurus rex.

He's just going through a control phase, I figured. I tried to confirm this was normal preschooler behaviour. "No, we've hardly seen anything like it," she said. I burst into tears. To console me, she resorted to techniques she normally uses on those under 5.

It wasn't my son's behaviour itself that upset me: I just wanted to hear that it was within the range of "normal." I didn't want special any more - I yearned for regular. I was like a cheating husband wanting nothing but to make up with the good, plain and faithful wife he's always taken for granted.

Something twigged in me recently when I picked up the paper and saw all the fuss about the theory that Chinese mothers are better (or was it stay-at-home mothers, or genetically modified mothers with extra arms and feet?). It was the fact that a Chinese mother actually called herself (and those of her culture) "superior." The unabashed use of that word sounded off in my head like a gong.

My husband and I moved our son to a regular daycare a few months ago. He is thriving there just as much as he did at his Ivy League one. We have also relaxed many of our ridiculously high standards. The paradox is that, in doing so, we've become happier people who relate to each other in more lighthearted ways, which makes for a healthier household for our son. Special is truly a double-edged sword.

I wish for all kids to attain their highest potential. For the next generation's strengths to be celebrated and shared for a greater good. My child is gloriously ordinary. I am a happy and proud mother of a normally unique, typically loveable little being.

And now that I realize this, I get to feel superior to all the other mothers who aren't there yet. 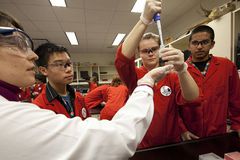 When kids' self-esteem is high, materialism is low
November 27, 2007
Follow us on Twitter @globeandmail Opens in a new window
Report an error
Due to technical reasons, we have temporarily removed commenting from our articles. We hope to have this fixed soon. Thank you for your patience. If you are looking to give feedback on our new site, please send it along to feedback@globeandmail.com. If you want to write a letter to the editor, please forward to letters@globeandmail.com.
Comments