An overwhelming majority of the medical community, as well as the U.S. Food and Drug Administration, say no.

But that hasn't stopped a growing number of companies and websites from marketing products they claim can prevent SIDS, the term used to describe the unexplained death of an infant up to 12 months old. Despite decades of research, the medical community still doesn't know exactly what causes SIDS.

Earlier this month, the U.S. FDA said it is clamping down by asking manufacturers to stop marketing products as being able to guard against SIDS. The agency said no products have ever received approval to make such claims. In addition, many medical experts say there is little or no evidence demonstrating any of those products are effective.

"These products are absolutely not necessary and they can be very dangerous," Susan Cummins, chief pediatric medical officer in the FDA's Center for Devices and Radiological Health, said in a statement.

In fact, the agency says it is aware of at least 13 infant deaths over the past 13 years linked to sleep positioners, which are placed in a crib to keep babies in a certain position. One of the primary concerns is that sleep positioners can cause babies to suffocate if they roll onto their stomachs.

In Canada, experts say it is time for the government to take action to deal with this issue because it's all too common for product manufacturers to make misleading claims to persuade parents they can prevent SIDS.

It's a serious problem that needs urgent attention, and perhaps even legislation, to protect children and families from these claims, said Denis Leduc, past president of the Canadian Paediatric Society and co-author of the society's statement on SIDS and sleep environments.

"It's a false sense of security," said Dr. Leduc, who is also a pediatrician. "I think we need to be able to have legislation that dictates that unless there is strict control over the evidence that supports these devices they cannot be released in the marketplace."

To reduce the chances of SIDS, accepted guidelines state babies should be put to sleep on their backs, alone in their crib or bassinet, with no fluffy or bulky blankets or toys that could obstruct breathing.

But the fact these sleep positioners, mattress covers, crib tents and other products continue to find customers demonstrates the perils of depending on the Internet for medical advice.

Health Canada advises against the use of sleep positioners, but hasn't stepped in to stop companies or websites from making potentially misleading marketing claims about products that purport to prevent SIDS or to aid infant breathing. The department has no records of babies dying or suffering other problems as a result of sleep positioners.

Major retailers such as Toys "R" Us sell baby monitors, mattress wedges and other products singled out by the U.S. FDA for potentially misleading claims regarding SIDS. For instance, the retail chainsells an Angelcare brand baby monitor that uses sensors under the mattress pad to pick up movement. It also sells a Jolly Jumper brand crib wedge, designed to keep a baby's head slightly elevated for "easier breathing and digestion" according to the company's online store.

Countless websites also sell crib wedges, monitors, bedding and sleep positioners that claim to prevent SIDS. One of the more common items found online are mattress covers that purport to protect babies from toxic "off-gassing" that some believe causes SIDS.

For instance, aCalifornia-based website, stopsidsnow.com, says SIDS is caused by "highly toxic nerve gases which can be generated from mattresses and other bedding used in babies' cribs. The gases are generated by action of common household fungi on compounds of phosphorus, arsenic and antimony present in the mattress or bedding."

Many parenting sites and blogs are dotted with discussions debating whether these products work and testimonials from those who say the products have worked wonders.

Yet, there is no credible scientific evidence tying gases from mattresses or bedding to SIDS, according to Dr. Leduc. In addition, no evidence exists to support the use of crib wedges, while high-end baby monitors may lull parents into thinking they don't have to be as strict with their baby's sleeping arrangements, said Irene Morgan, chair of the board of directors at the Canadian Foundation for the Study of Infant Deaths.

"It poses a danger to infants," she said. "When parents are trying to decide what to do and all of these products are out on the market and claim to have injury- or risk-reduction on the label, it provides them with a false sense of security."

Child-health experts say they want action taken to stop companies from marketing products as being able to prevent SIDS. Otherwise, the high volume of misinformation available online will continue convincing parents and caregivers these items are safe and effective, they say.

"[Parents]rush to a website where they try to find information that will make them feel comfortable," Dr. Leduc said. "If we really stuck to the core advice about how to reduce the risk, as boring as it sounds … it really will eliminate the vast, vast majority of risk factors." 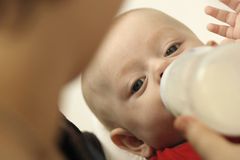 Solving the riddle of SIDS
February 5, 2010
Follow Carly Weeks on Twitter @carlyweeks
Report an error Editorial code of conduct
Due to technical reasons, we have temporarily removed commenting from our articles. We hope to have this fixed soon. Thank you for your patience. If you are looking to give feedback on our new site, please send it along to feedback@globeandmail.com. If you want to write a letter to the editor, please forward to letters@globeandmail.com.
Comments