A child walks into a daycare near Ottawa holding a cheese sandwich. Seconds later, she's being sent home, suspended for flouting the daycare's strict policy about bringing in "outside food."

After the toddler's dad, Randy Murray, took his outrage to the media, the Barrhaven, Ont., daycare director told the CBC that "the school suspends students for three days for bringing in outside food if it does not contain peanuts. If food is brought in that contains peanuts, the daycare clients are expelled."

All this over a lousy cheese sandwich? Why, yes. But the case is also about a lot more than a sammie. There are actually many issues in play; take your pick:

1. The allergy issue. "Outside food" in this case isn't akin to the sneaky snacks you smuggle into movies. Many schools and daycares post signs that say something like no nuts beyond this point. And it's not the cheese sandwich per se that anyone is worried about – although dairy allergies are serious, too – but more the unfettered entry of food in general. Today it's Velveeta; tomorrow a bag of mixed nuts.

I recall an incident at our nut-free daycare when a gentle e-mail reminder went out about kids eating peanut or almond butter for breakfast. It asked us to ensure our kids' washed their hands and faces to make sure there was no residue. It's a valid concern.

2. And these are the rules.

Many observers and commenters are saying Murray knew the rules and should have followed them, end of story.

yummymummyclub.ca blogger Alexandria Durrell, for one, doesn't let him off the hook.

"Hmm, so let me get this straight, Murray – you signed your children up for a daycare centre that has a strict policy regarding outside food (which was reiterated to all parents as recently as January), yet you chose to break the rules and are now complaining that the rules are too harsh and the repercussions unfair? How does that work, exactly?"

This is where the heart of the outrage lies for many observers. Suspensions and expulsions should be for kids who cut class, cheat on exams or otherwise exhibit bad behaviour, right? Surely not for a two-year-old who can be clutching anything from a toy to a sandwich to a dirty twig at any given moment.

As Judy Arnall, a Calgary parenting educator, pointed out in an e-mail exchange, "Young children under the age of 3 have very little self-control due to their brain development."

This food conflagration is just the latest in a string of crackdowns on the food kids bring to class. Don't forget, there's a whole other category to this genre:

4. Sometimes the nutrition police mean well (but need some perspective.)

There was the Ritz cracker case of the lunch that was missing a "grain" element in a school with a particular template of what a healthy lunch should be. Crackers were to be "charged" to the family, despite the meal of beef, potatoes, fruits and veggies sounding pretty complete.

What if that child ate a breakfast full of pancakes or toast (or, I suppose Ritz crackers if you follow the daycare's logic) and had a pasta dinner ahead of them? Maybe a lunch of meat and veggies makes a lot of sense.

(That school has now switched to hot lunches, saving everyone that particular headache.)

A similar incident occurred in Berkshire, England: "This relatively small village school has implemented its own 'healthy eating' policy, which under normal circumstances would be laudable; however, it has enforced it to ridiculous levels by suspending a six-year-old boy from school for four days simply for bringing Mini Cheddars in his packed lunch," writes Sarah Jordan in the Nottingham Post.

Where does this leave parents? Confused. Depending on your school's policies, cheese sandwiches, Ritz crackers and Mini Cheddars may be contraband. Or they may be a "grain." You'll have to read the fine print.

That is, if you have time while planning and prepping all the meals that don't get eaten at school.

For schools and parents, what is the right approach to food allergies?
February 2, 2014 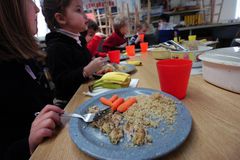 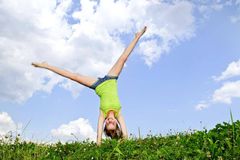 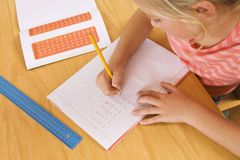 'Baby apartheid': Should kids be banned from public places?
September 27, 2012 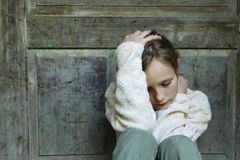