Baby Ollie has a lot of family to visit this holiday season. There's Uncle Zaid, Aunt Nada and cousin Joud on the 24th. Christmas lunch is with Nana, Grandpa and Rosalie and Christmas dinner is with Grandma B and Papa G. On Boxing Day, it's lunch with cousins Brooklyn and Koen. Granda and Baba are pencilled in for Dec. 27. And that schedule doesn't include preseason engagements.

The calendar's so full because Ollie, who was born last March, has four parents – Barb Besharat, Ashley McGhee, Ian Macpherson and John Caffery – and all the extended families want a piece of baby's first Christmas. "Our upcoming holidays are a bit of a tour," says Caffery. Christmas Eve and morning, however, will be just the five of them.

Last month, Ontario's parenting laws were updated: Bill 28, the All Families Are Equal Act, ensures that parents who conceive their children in non-standard ways are legally recognized from birth. It was an attempt to recognize the realities of LGBTQ families, for whom the parental permutations are many.

Sometimes, a lesbian couple pairs up with a gay couple or a single man, to co-parent. Sometimes, the combination is a gay couple with a single woman, or three or four people together. Prior to the bill, some of the parents in these family units would not have legal parenting rights and responsibilities – such as custody, access or support – without the say-so of a judge.

Now, that's no longer the case. One of the changes explicitly clears the way for families with as many as four parents – which means that all four of Ollie's parents can be listed on the birth certificate and recognized as full parents in all ways under the law.

Ollie was conceived after Besharat and McGhee approached Caffery and Macpherson with "a big little question." Both couples had been together for years and Besharat and Caffery had become close friends through work.

The couples shared similar philosophies, values and politics, but even so, the group still spent four months discussing their expectations about parenting – and co-parenting – and all four attended a weekend-long intensive queer- and trans-family planning course.

They set out their intentions in a 12-page document they call the Family Council Charter. "It's not a four-way marriage," says Besharat, "but you're proposing to be connected for the rest of your life."

The family maintains two separate households in Toronto; Ollie lives in both. "Think about a divorced couple, but take away all the animosity," says Macpherson. These days, because Ollie is still breastfeeding, there are quite a few whole-family sleepovers too.

McGhee says the family faces the same challenges and exhaustions as other new parents, but they do get to spread the work around a bit more. While McGhee rested after giving birth last spring, the other three split up laundry, grocery and wake-up duties. Now, all four parents are sharing the misery of hunting down a suitable child-care space.

If the upside is more hands on deck, the downside is that it takes some co-ordinating. There are a lot of schedules to factor in. "We all get out our planners and map out the next few months," Caffery says.

Bill 28 was the result of a Charter of Rights challenge in April that the four participated in. In June, the Ontario Superior Court ruled that the status quo was discriminatory and had to be fixed.

Marcie Gibson of Hamilton is a member of another four-parent family that joined in the Charter challenge. Gibson is one of four women collectively parenting five children, several of whom have special needs. Three of the children are now young adults and have left the family nest, but until not so long ago, everyone lived together in one home.

The two families amalgamated five years ago – moving not only homes but cities – after the four parents decided that sharing their lives and their parenting would provide benefits for all.

"Primarily, it's just having a multiplicity of perspectives – people with different life experiences and gifts to share," Gibson says. "But also, people with energy and time, being able to spell each other off." It was easier for a larger family unit to do things such as go camping with young children, Gibson says, since there were plenty of adults and teenagers to guide the younger kids.

Gibson has found that organization is key. Domestic duties can't be left to assumptions, she says – "you need to figure out who is making dinner for nine people." It takes time to organize everything from meals to bedtimes to finances. "We spend a lot of time in meetings," Gibson says.

Theirs is a multifaith family, mostly Jewish, but partly Christian, and one that's looking forward to the older kids coming home for the season. "Our immediate family is big enough to have a full table," Gibson says.

From the Charter challenge through the court win and the final updated laws, 2016 has been a momentous year for many LGBTQ families, one that Ollie's parents will definitely be celebrating.

"I don't think I fully realized the stress I was feeling with that uncertainty," Caffery says now. The new laws mean families like theirs no longer need to ask special permission just to exist. "The state and our institutions are not able to tell us we are not a family when we know we are." 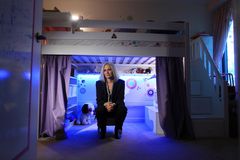 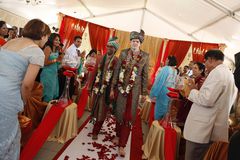