Oh, prom. You hideous hell-child of the eight-hour banquet-room wedding and New Year's Eve. You, with your bad house band, syrupy drinks, amped-up expectations and inborn disappointment. You whose reality is more Carrie than Pretty in Pink.

This is not how prom is sold to those who haven't been yet. For that cohort, here's a tip: Skip it. Really. Those hands in your pockets are not your own (or Josh's, or Jessica's – sorry), but the talons of an industry eager to profit from your youthful enthusiasm. Things have changed since my friends and I shared a cab to our high- school gym 20-something years ago. Now, prom follows the spend-and-stress contours of the modern wedding. There are prom magazines, prom expos, prom reality-TV shows, professional prom planners, and a Disney movie called – spell it out, Walt – Prom. It's like we're marking the path out of childhood by passing along the worst habits of adulthood: debt, excessive consumption and hangovers.

According to an annual survey by Visa, American families expect to spend about $1,139 on prom this year. Three years ago, total spending was $807. Alarmingly, families in an income bracket of less than $50,000 annually will spend more ($1,245) than those earning more than $50,000 ($1,129). This suggests that prom spending is aligned with achieving social status, a disturbing idea that's becoming normalized, so much so that charities have popped up to make sure kids without cash get to the party. In Toronto last month, the Corsage Project set up a room in the Reference Library filled with tables of glittering shoes and purses and racks of puffy dresses, all free to 250 pre-selected girls. The gesture is kind and inclusive, but alarming, too: Is prom so important that it requires the urgency of a food bank?

The pressure is on months before the night even begins. YouTube is bursting with "promposals" and "Best Yes" videos of high-school students seeking prom dates. Innovative invitations include "twerking" in a pair of gold shorts, flash mobbing and lip-syncing to One Direction. An L.A.-based company called the Heart Bandits that specializes in staging wedding proposals has now branched out into the teen market, including charging $400 for a scavenger-hunt prom invite, according to The New York Times.

A subset is the celebrity prom proposal, where real students harass famous people for dates. Sports Illustrated swimsuit model Kate Upton said no to a winningly geeky L.A. kid who made a video of himself showering, shaving and begging. Miami Heat Star Dwayne Wade actually showed up recently at a prom with flowers for a persistent, Tweet-happy South Florida girl – work that brand, Dwayne. You have to feel for the record-it-all generation: Prom fetish will be very embarrassing in about six years, but YouTube never forgets.

The prom, in its most positive incarnation, is a rite of passage, a secular symbol of the passing of time celebrated with a group of friends – a.k.a. a party. It has its origins in the American 19th-century debutante ball: "prom" as in "promenade." According to a social history of the prom called Prom Night, by Amy L. Best, this upper-crust tradition made its way to the lower classes as a senior dance by the 1940s, gaining in significance as teen culture grew with the Boomers.

The ritual involves a kind of play-acting, where kids dress like grown-ups (or at least like bridesmaids), and perform the most conventional gender roles. Very few of the promposals involve girls asking guys, or lesbian or gay "asks." Of course, it's inevitable that this old-fashioned tradition is forced to interact with the real world. Hence, Wilcox County, Georgia just held its first integrated prom (60 years after segregation became illegal), and recent years have brought news reports of gay teens crowned at homecoming. Now carnations, awkwardness and bubble machines are open to all.

But no matter who's invited, the enduring prom fantasy is still the mix of fairy tale and raunch of the sort promised by the movie American Pie. It's a night with the glittery princess patina of romance and the unspoken expectation of sex – in other words: a recipe for disaster.

Graduating high school is usually slightly melancholic, and prom is the last childhood party. You gather with friends, sharing the knowledge that you probably won't care about each other so deeply for too much longer. It's possible, and cheaper, to do this in a park, or on a rooftop, or in someone's basement. Those feelings don't require a limo driver.

But if you go, know that it will not be the best night of your life, if your life goes right. Parents: Don't enable the madness with credit cards. Kids: Scale back the expectations. And above all: Borrow, don't buy.

Facts & Arguments
My daughter's prom dress: Have I morphed into a prude?
April 15, 2013 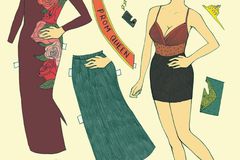 You think they got it right in the ’50s? How nostalgia parenting is pure fantasy
January 3, 2013 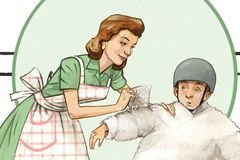