As prom approaches this spring, "promposals" have taken Canadian high schools by storm.

Once posed as a timid "Will you go to prom with me?" in the locker room, the promposal is now an extravagant public affair: Think choreographed dance numbers, serenades, elaborate scavenger hunts and dramatic staging, with "Prom?" painted on cavalcades of cars, draped off bridges or slipped into fortune cookies.

Long a tradition in the United States, promposing has exploded in Canada this spring, as evidenced by a stream of YouTube videos featuring awkward boys courting bashful girls in cafeterias and classrooms as hordes of their squealing girlfriends look on.

"There have been tons of promposals this year," says Kayla Sabharwal, a 17-year-old student at Etobicoke, Ont.'s Richview Collegiate Institute. The student council rep runs the Facebook group "Promposals ;)" which is giving away half-price prom tickets for the "best/cutest/most creative" effort.

"The better promposals are ones that are more personal, each one designed to suit the girl," Ms. Sabharwal says.

In a sense, she says, they're like training wheels for the marriage proposal: "It's good practice for the boys."

If that's the case, Joel Wong-Hing passed with flying colours.

The 18-year-old promposed to his girlfriend of three years with a complex scavenger hunt at St. Thomas Aquinas Secondary School in Oakville, Ont. earlier this month.

For 15 minutes, Sarah Vasconcelos was led around from weight room to chapel to theatre and so on by a gaggle of cell phone-yielding girls. At each location she popped a balloon containing a clue for the next location. The end of Ms. Vasconcelos's journey brought her to the cafeteria, where her boyfriend serenaded her on a ukulele as a mob looked on. (The song was Angel by teen dream Jack Johnson.) "Don't you think this is better than Debbie's?" one onlooker snorted on the YouTube video, revealing the competitive side of promposals.

Indeed, the pressure is now on guys to go all out.

"I just wanted to do it in a big way," said Mr. Wong-Hing, who spent a week preparing the stunt, including a weekend spent solely on testing the balloons.

"When other guys ask in a cute or special way, it puts pressure on the rest," Ms. Sabharwal says.

The promposal is now the cherry on top at the end of Grade 12, for the cool kids at least.

"I think a lot of girls like getting attention and feeling special at the end of their high-school careers," says Hannah Tam, an 18-year-old at Richview who got a fortune cookie promposal from her date, a close friend.

"I didn't see it coming, really, we'd been fighting and I thought nothing of his bag of fortune cookies. My reaction was just to laugh and apologize for yelling at him. And yes, I said yes."

Although her positive response wasn't a given, Ms. Tam says she's heard of only one unsuccessful promposal.

"The guy drove to a girl's house and put a sign that said "prom?" in the window and stood there with a bouquet of roses. She apologized but said sorry, she had someone else."

Still, the risk of a no is low and much of the surprise factor is staged: "Guys won't make a public promposal unless they know for sure that the girl will say yes," Ms. Sabharwal says.

Girls asking guys appears to be far less common, but Alimah Hosein went for it recently with Jake Sirineo - "A guy I had a tiny crush on" - through YouTube video. The 17-year-old from Scarborough, Ont.'s R.H. King Academy flashed a series of cue cards as Avril Lavigne's What the Hell played. Mr. Sirineo said yes.

"He sent me a text the next morning and said that it was the best thing anyone's ever done for him."

There's a welcome innocence to promposals, particularly as cyberbullying, DUIs and oral sex seem to make up the bulk of the teen canon in the press.

Students say their teachers have generally supported the trend - in Mr. Wong-Hing's video, a librarian offered up one of the balloons in the scavenger hunt - but that kind of love wasn't in the air in Shelton, Conn., where James Tate was suspended and banned from going to prom this spring after he promposed to Sonali Rodriguez with large, cardboard letters pasted on their school entranceway ("Will you go to the prom with me? HMU [Hit me up]- Tate," it read.) The headmistress relented after Mr. Tate drew more than 200,000 supporters on Facebook and got a spot on Jimmy Kimmel Live.

Success stories aside, promposals can become another layer of exclusion for the wallflowers who don't have dates.

"There will always be people who feel left out, whether it's the guys that are scared of being rejected, or the girls who are scared of not being asked," Ms. Tam says.

For this reason, there are even pre-promposals, with hopefuls posting popular promposal videos, with a wish.

Says Mr. Wong-Hing, "Some people post them before and say 'I would love this to happen to me.'" 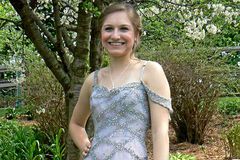 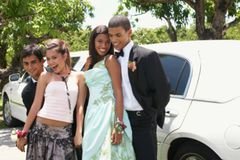