I learned to drive on slippery Nova Scotian roads in my father's yellow station wagon. It wasn't cool but it had a cassette tape player. The first two CDs I used to make cassette tapes for driving were U2's Achtung Baby and No Need to Argue from the Cranberries. Dreaming My Dreams was my favourite driving song.

On Monday, Dolores O'Riordan, songwriter and frontwoman of the iconic Irish band, died suddenly at the age of 46. She was not much older than I am but her music created a soundtrack to my high school and early university days. She performed as if she was making sure you knew that women rocking out is perfectly normal. Her throaty voice was unmistakable, whether she was intently singing Zombie or gently performing Dreaming My Dreams or Ode to My Family. Back then, I knew her voice would be one I would listen to for the rest of my life.

When I was pregnant, I listened to recitations of the Koran to satisfy a spiritual need – and I listened to Vivaldi, Fleetwood Mac, Bob Marley, the Rankin Family (yes, I had to be sure my unborn child knew its Maritime roots), Tina Turner and Edith Piaf. That's in addition to the Bollywood tunes being sung in the movies we watched with my in-laws. I wanted to be sure my babies heard everything and anything.

Fast-forward 18 years and I am now listening to the music my kids want. On our frequent road trips, my eldest son is often at the wheel, and we listen to a mix of trap, top-40 stuff and other music that reflects their current mood. My youngest son got me hooked on Afro-French rap, while my daughter sometimes picks melancholy music from the Shonda Rhimes TV shows she's watching. When she was 11, she insisted Taylor Swift was a musical genius like Stevie Nicks. I remember thinking, "This generation is doomed."

Still, I listen and try to understand the words of Travis Scott or 21 Savage. And I ask them to translate. They roll their eyes when I explain that music from my time was less Auto-Tune or digital arrangement, and more raw vocal and instrument-heavy.

On the other hand, they don't understand my passion for Duran Duran.

My friend, writer and broadcaster, Naheed Mustafa, is a metalhead and she doesn't debate with her kids about whether music from her time is better or not. "I listen to my kids' music, which…I find meaningful and relevant," she says. "But I suspect their willingness to listen only goes one way – they have no time for Metallica."

My colleague Branden Peters is a music writer with an expertise in hip hop. He tells me that there are certain artists who transcend age. "Depends on the age range, but I believe that Jay Z is one of those artists [who connect younger and older folks] because older people began paying attention because of Beyonce. E-40 is another because he's been making relevant music since the late eighties."

This resonates with me: My dad wasn't a huge music lover but he listened to a lot of classical music (we ate supper every night to Ravel's Bolero playing on the stereo). I ended up playing the cello for eight years from that influence. In addition to being connected to traditional regional Pakistani from the northern province, my mother sang Doris Day's Que Sera, Sera often and I respected her adoration of the Beatles and Elvis Presley.

A few years ago, a new version of Tracy Chapman's classic Fast Car was released by Jonas Blue featuring Dakota. It was a fast-paced dance-club tune. But I played the original for my kids and after listening quietly, they told me they preferred the original version. You can't listen to this song and not reflect on issues of systemic poverty, racism and privilege. Music leads us to talk about these things.

I wonder whether my children will appreciate a wide variety like I had hoped. Losing music legends like Dolores O'Riordan, Chris Cornell, Chester Bennington and our beloved Gord Downie seem heavier because they provided the soundtracks to many of our lived experiences. It is less a statement about quality of music and perhaps more of a reminder of our own mortality.

In the meantime, I will continue to sing Cardi B's Bodak Yellow, at the top of my lungs. 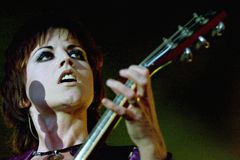 Cranberries lead singer Dolores O’Riordan dies suddenly at 46
January 15, 2018
Follow us on Twitter @globeandmail Opens in a new window
Report an error Editorial code of conduct
Due to technical reasons, we have temporarily removed commenting from our articles. We hope to have this fixed soon. Thank you for your patience. If you are looking to give feedback on our new site, please send it along to feedback@globeandmail.com. If you want to write a letter to the editor, please forward to letters@globeandmail.com.
Comments are closed