I haven't studied enough. I'm going to fail the test. My mom's going to be mad. Maybe I'll skip class.

Thoughts like these can quickly gallop out of control in kids' minds, but what if there was a way they could clear them away? Enter the three-minute breathing meditation, which can be done anywhere, whether it's on the bus or in a school hallway.

It's one of the cornerstones of the increasingly popular practice of mindfulness, a blend of Buddhism-inspired calm and cognitive-behavioural therapy. Used as a therapy for adults for about 30 years, it's now moving into the world of kids. Touted as a way to help children relax and focus their thoughts, mindfulness is being used in schools to help students function better – one study says it may even help their marks. Research already shows that mindfulness therapy has huge potential for kids with attention deficit hyperactivity disorder and anxiety.

For Toronto teen Caitlin Saracevic, the short meditative breaks help curb her ADHD, which makes her feel "constantly on the go mentally, with a thousand thoughts going on at once."

The first-year university student uses mindfulness to reduce that brain traffic before exams, not that you would notice. "It would just look like I'm chilling, looking at my iPod," she says. "It lets me not feel as overwhelmed."

Experts say the key to this rests in the idea that thoughts and feelings – especially negative, anxious ones – aren't necessarily reality and don't have to be permanent.

Toronto child psychiatrist and mindfulness expert M. Lee Freedman says she puts it simply to her patients: "You don't actually have to believe everything you think."

She says one child looked at her after she said this and replied: "'You know what? That was the first useful thing any therapist has said to me,'" she recalls. "You could see everything start to shift. His face started to change."

Educators are buying into the buzz with programs popping up across the country. One of the most established, called MindUP, has been running in Vancouver schools for six years, and begins with kids as young as kindergarten-age.

Through her book, Ms. Hawn aims to bring the mindfulness message to parents.

"By … learning to quiet our own minds and reduce the effects of stress, we'll be more in control of our own emotions and reactions," Ms. Hawn writes. "This will help us not only in our parenting but also in our personal relationships, in the workplace and in the world at large."

While that may sound like nothing more than a new-age boast, experts who work in the field are especially optimistic about the benefits of recalibrating family dynamics. Dr. Freedman says she's noticed that much of the benefit a child gets from talk therapy comes from the "idea that I'm really listening to them and not judging them. This notion of them feeling like, 'She is very present here, I have her full attention.'"

As a mother of four, she remembers "the moment I discovered, my gosh, these children have more of my full attention that my own children."

She is offering two new programs, one for parents of anxious children, starting next month and another more general "mindfulness for families," which she describes as taking a preventative approach. It started this week.

"We live in a very stressed society," she says. "There's a lot of multitasking going on. Human beings are going into automatic pilot, which is the opposite of being mindful."

Consider how mindfulness might help you deal with squabbling siblings: Dr. Freedman says she'd suggest instead of rushing in and reacting, parents take a "mindful moment" before making a move.

"It's not a big long thing, where you put your finger in the air and say 'Kids, give me 10 minutes' and go off. Again, with practice, you get pretty good at it. It's like checking your rearview mirror, right? You don't really have to take your eyes off the road, but you can check pretty frequently.

"You ask yourself: Is my heart racing? Is the blood rushing to my face? What's going on for me as I'm witnessing what's going on in here? What am I thinking?"

Then, she says, you can see that, maybe, you're sympathizing with one child because you're remembering what your own sister did to you. Or you're thinking, "I must be a terrible parent." Then, you can filter out what's unnecessary and "be pretty wise in what you do and don't say."

She says she'll also urge parents to key in on their child's face for clues. "Sometimes you can get so caught up in the moment, you can't see the sadness or whatever else might be going on there."

That may be one of the reasons formal mindfulness therapy is effective in some clinical settings, reducing chronic pain and preventing depression relapses. Newer studies on group therapies adapted for children with ADHD and anxiety show that mindfulness is a serious alternative or supplement to medication.

In one session, for instance, Dr. Semple, a professor of psychiatry at the University of Southern California and author of Mindfulness-Based Cognitive Therapy for Anxious Children, will play a 30-second clip of music and ask kids to write down their thoughts and feelings – and write a title for the piece. One child might think a piece was a wedding march and another, whose dog had just died, for instance, might call it a funeral march.

"This helps kids see in real life that their thoughts and feelings contribute to their own experiences," she says.

In one mindfulness study she conducted at Columbia University in 2002 and 2003 with kids from a remedial-reading program in Spanish Harlem, all the children went on to pass their city-wide exams. The children who had met a clinical diagnosis of anxiety " no longer met the diagnosis at the end of the study," she says.

And more clinical evidence about the efficacy of also targeting patients' parents may be on the way.

Ms. Saracevic, who participated in an ongoing University of Toronto study with her mother, says there's been a huge change in their relationship since they both began practising mindfulness, and that's helped her manage her ADHD. "She's a total Mommy Bear ... it's hard for her to just listen," she says. "Now she knows we can come up with [coping]strategies together."

For her part, her mom, Jana Saracevic, says she still finds it hard to apply mindfulness principles all the time. But, she adds, "we're having an effect on each other. It's working somehow."

Editor's Note: Randye Semple is a child psychologist. Incorrect information appeared in the original version of this story. 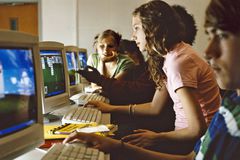 Teen mood swings or depression?
June 6, 2007
Follow Tralee Pearce on Twitter @traleepearce
Report an error Editorial code of conduct
Due to technical reasons, we have temporarily removed commenting from our articles. We hope to have this fixed soon. Thank you for your patience. If you are looking to give feedback on our new site, please send it along to feedback@globeandmail.com. If you want to write a letter to the editor, please forward to letters@globeandmail.com.
Comments