In an empty lot behind his Winnipeg home, seven-year-old James Loewen and another boy had launched into an innocent game of "I'll show you mine if you show me yours." That's when he made his startling discovery.

"I thought with great shock that the head of his penis had been cut off," recalled Mr. Loewen, now 56.

Join the conversation on circumcision live Friday at 2 p.m. EST

"He explained to me that, no, it was I who had had something cut off. He showed how me how his foreskin pulled back, and the recognition of what he was saying was one of the more profound shocks of my childhood, perhaps even of my whole life."

The campaign is seeing a groundswell of support, from young men as well as expectant mothers, who question the convention of circumcision just as they consider other issues concerning breastfeeding, home births and vaccines.

Now, intactivists want the practice outlawed entirely. "The issue, as we see it, is one of consent," says Dennis Harrison, Vancouver-based spokesman for the Association for Genital Integrity. "Everybody seems to agree that circumcision is an optional, discretionary procedure. It shouldn't be done without the consent of a patient."

In San Francisco, meanwhile, Lloyd Schofield is trying to raise support for an initiative to be put on November's ballot that would make it a misdemeanour to "circumcise, excise, cut or mutilate the … genitals" of all minors.

Yet just as the Western rate declines, groups continue to promote male circumcision in AIDS-beleaguered Africa. The World Health Organization has endorsed the practice to reduce HIV, while a Johns Hopkins study conducted in Africa and published in the Lancet earlier this month suggests the procedure helps reduce HPV rates in women.

"We believe that these findings can be extrapolated to the West," said Aaron Tobian, an assistant professor of pathology who co-authored the study. "Male circumcision decreases the risk of multiple sexually transmitted infections in both sexes, and these benefits really should guide public health policies for neonatal and adult male circumcision programs."

The statements have incensed intactivists, particularly since medical associations such as the Canadian Paediatric Society have stated that circumcision is "not medically necessary."

"Why are we pushing this surgical intervention when there are so many other ways of addressing these public health issues?" says Georganne Chapin, executive director of the non-profit group Intact America.

Canada no longer publicly funds circumcision; the going rate is between $100 and $300. In the United States, many Medicaid programs still pay, even though the American Academy of Pediatrics failed to recommend the practice in 1999.

Why do parents still circumcise their boys?

Many do it for religious reasons, while others believe it reduces the risk of STIs. There is also a cosmetic factor.

"On The Doctors, Dr. Lisa suggested to millions of viewers around the world that male circumcision is better because it looks better. What kind of biased medical advice is that?" says Michael Tucker, a 25-year-old Los Angeles aircraft electrician who founded the group End Routine Infant Circumcision.

"It's just cultural preference, like why do people prefer blonds?" Ms. Chapin says. "But switch the genders here: In countries where they practise female genital cutting, they use exactly the same rationale: 'Men won't want to marry women unless they've been cut.' "

For others, circumcision is self-motivated within the family: Sons are to look like their fathers.

"There are some men who are just extremely narcissistic and they cannot wait to have the child carved to be just like them," says B. Maurene White, a Montreal nurse who has agitated against circumcision for five decades.

"It comes out of a deep pain and denial that anything wrong was done to them. … It perpetuates the cycle."

Proponents and critics disagree about how much pain newborns feel. Today, babies receive local anesthesia and adults are put under general anesthetic - but it wasn't always this way.

As a student nurse in 1960, Ms. White only had to watch one procedure to make up her mind: "I saw the doctor take this unanesthetized child, tie him down on a board and then basically cut up his genitals. The pain screams are absolutely unearthly. It's a five-layer organ, 20,000 to 40,000 nerve endings of seven different types."

The 69-year-old nurse says she has seen dozens of kinds of injuries, including uneven scarring, skin bridges and suture holes. She's counselled more than 3,000 circumcised men suffering from sexual dysfunction, including pain during erections and loss of sensation during sex. This would make sense: The foreskin has long been identified as the most sensitive part of the penis.

Today, Ms. White teaches men how to manually "restore" their foreskins, an elaborate process that involves stretching and taping the remnants of a foreskin for up to three years. In one case, a man with a very uneven cut complained of a penis that twisted so badly during erections, sex was nearly impossible, and he and his wife were thinking about divorcing. The husband set to his "homework," eventually reducing the curvature significantly, Ms. White says."It saved their marriage." 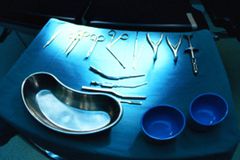