"Having it all" has always struck me as an essentially juvenile and ultimately pernicious myth. No one gets to have it all.

Responsible adulthood means making choices, and in choosing one way of life or course of action we necessarily exclude others. You can't opt to dedicate yourself to climbing the corporate ladder and also be a stay-at-home mother, for instance. The more we think we can have it all and bash our heads against that impossible standard, the more frustrated we're likely to be.

But there is an equally harmful myth: 50-50 parenting. Who can blame parents for being drawn into such a wonderfully egalitarian ideal? If none of us gets to have it all, then we can at least share what we do have equally. But if 50-50 parenting is math that adds up to neither spouse advancing as much as they could in their careers, a household that lacks order and a relationship that fosters resentment because the pursuit of total fairness is a losing game, then it is a myth we should recognize as such and drop.

Andrew Moravcsik makes that case in a new and much discussed Atlantic essay called Why I Put My Wife's Career First.

He and his wife both worked at Harvard when their two sons were born and thought they could be co-parents who went back and forth between work and kids, depending on whose schedule required more time at the office or on the road.

"We had bought into the prevailing wisdom among other dual-career families we knew: 50-50 parenting was not just desirable, but doable," Moravcsik writes.

But he and his wife, Anne-Marie Slaughter, a former academic for the U.S. State Department who once wrote about the challenges of having it all, also for the Atlantic, and is now the CEO of a think tank, eventually were forced to admit that one of them needed to become the "lead parent."

"There was never really any question that the role would fall to me," Moravcsik writes. "Anne-Marie's job duties are incompatible with being a lead parent: When a TV network seeks an interview, a CEO calls a board meeting, the secretary of state seeks your advice, or a donor wants you to travel to a fund-raising meeting, showing up is nonnegotiable. For years, Anne-Marie has rarely been home for more than a couple of dinners a week, except during holidays."

Moravcsik has continued to work as a political scientist at a university, although "the quantity and quality of my research has suffered" due to his role as lead parent, he writes.

Slaughter is involved in her kids' lives and emotionally close to both of them, Kovacsik stresses, but that is not the same as being the lead parent.

"Lead parenting is being on the front lines of everyday life. In my years as lead parent, I have gotten the kids out of the house in the morning; enforced bedtimes at night; monitored TV and computer use; attempted to ensure that homework got done right; encouraged involvement in sports and music; attended the baseball games, piano lessons, plays, and concerts that resulted; and kept tabs on social lives. To this day, I am listed first on emergency forms; I am the parent who drops everything in the event of a crisis," Moravcsik writes.

His article has been hailed as "brave" and "feminist parenting."

Much of the praise on social media comes no doubt from the fact that Moravcsik is arguing in favour of flipping traditional gender roles to help women advance in their careers.

"A female business executive willing to do what it takes to get to the top – go on every trip, meet every client, accept every promotion, even pick up and move to a new location when asked – needs what male CEOs have always had: a spouse who bears most of the burden at home," he writes.

We could debate endlessly which spouse should be the lead parent in any given household based on a huge range of specific factors and contexts.

Of course, we should no longer assume that a husband's career automatically takes priority.

And yes, being a father who is the lead parent is a role with many challenges and benefits. It is also a role we as a society are still getting used to.

But if we want richer, more fulfilling lives, we need to abandon the myth of 50-50 parenting and accept that one person – male or female – needs to be the lead parent. 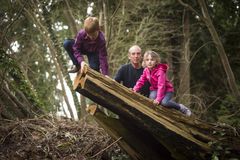 Daddy blogger Doyin Richards’ message for moms: ‘You have to let a dad do things his way’
September 18, 2014