Spanking is a thorny issue. Has what seems like a Dickensian practice been slain by liberal parenting practices? Or is it Canadians' dirty secret?

Whatever the case, the issue is on the table again, courtesy of outspoken London Mayor Boris Johnson.

Mr. Johnson has sparked a debate in Britain by suggesting that worrying about fine distinctions – a smack on the hand. A spank on the bottom. When is it okay, when is it bad parenting, and when it is outright assault? – limits parents' right to discipline their kids.

"People do feel anxious about imposing discipline on their children, whether the law will support them...," he told the BBC. The comments were in support of other politicians' statements that last summer's London riots were, in part, caused by lax parenting.

Here in Canada, the issue of spanking children remains a relatively private and elusive issue.

Mary Ann Barker said she always thought there would be a place for spanking when she had kids. Now that she is a mother, she is decidedly anti-spanking. The Halifax mom says a firm voice gets her point across.

Furthermore, she is "concerned that if my small child were to see me slap one of my other children she might learn that behaviour, she being too young to understand the process and see 'bad action equals slap' and then use that formula in her own dealings with other small people …" she wrote in a Facebook exchange.

Parents might be surprised to hear we have a "spanking law" in Canada.

Section 43 of the Criminal Code – which allows for a reasonable-force defence for parents and caregivers accused of assaulting children – has had two very public outings in the past decade.

There was an eye-opening Charter challenge in 2004, with the Supreme Court upholding the law, with conditions attached. And a 2008 Senate push to strike down the law failed.

"We're not talking about smacking our kids around the head because they looked at you the wrong way at the dining room table, like in Victorian times," says Vancouver-based criminal lawyer Richard Fowler, a member of the group of criminal lawyers that defended the law before the Senate.

As a country, we're still spanking our kids, but whether influenced by the law, public education or our own ethics, we're increasingly conflicted about it.

For instance, in a 2005 study of mothers of preschoolers in Manitoba and Ontario, 70 per cent reported having used physical punishment and one-third did so at least once a week. Yet in a poll done in 2007 for The Globe and Mail by the Strategic Counsel, 78 per cent of Canadian parents of children under 18 believed that parents do not discipline their children enough these days – and 42 per cent of Canadians believed spanking is beneficial to a child's development..

Still, other research has shown that parents are slowly internalizing reports on the body of research that links physical punishment in childhood with a number of negative outcomes, including cognitive deficits and aggressive behaviour.

In surveys, few parents believe that spanking their children is a constructive thing to do. And in his research into cross-cultural parenting differences, University of Montreal researcher Michel Claes found that Canadians were the more lenient and tolerant when compared with French and Italian parents.

So we still may be spanking a lot, but we don't believe it's beneficial.

When a child misbehaves repeatedly, or when a parent is tired, the urge to strike out can sometimes seem overwhelming, but parents looking for direction may find the Supreme Court's ruling chillingly detailed in its definition.

According to the court's conditions, parents cannot use force on a child under 2 or over 12, nor may they use objects (such as spoons and belts) or hit a child's head. The seriousness of the child's behaviour isn't relevant in judging the "reasonableness" of the force used. The action also can't be the result of a parent's "frustration, loss of temper or abusive personality."

Spanking was once considered a standard parenting practice. Mr. Fowler says that the 2004 decision brought the law in line with modern values.

"Values have shifted in the sense that probably the majority of well-educated and well-meaning parents would agree that physical punishment is inappropriate. I think a majority of parents would say that a physical form of correction is inevitable."

Maybe the messages sent out by bodies like the Public Health Agency of Canada, which states on its site, "Never spank! It simply doesn't work – for the child or the parent," are working.

Martha Mackinnon, the executive director of the Toronto legal-aid group Children, Youth and the Law, the group that took the issue to the Supreme Court, says there is evidence that the practice is on the decline. Of people who were spanked as kids, "an increasing number won't spank their own kids," she says. They look for other non-physical disciplinary tactics, she says.

But she often has kids and parents calling to ask what's legal. When a father recently cuffed his child with a "foodstuff" passersby called the police. Ms. Mackinnon told the frantic wife that he had, indeed, broken the law.

Another Facebook commenter, Kristin Jones Hurst, says for her, spanking is "for attention-getting, in the moment, to stop the incorrect behaviour, and is not used in anger. A spank is small, short and quick, and it shouldn't hurt, she wrote on the Globe Life page. Beyond that, she says, alternative discipline methods are the way to go, such as "no [Nintendo]DS time, no favourite show for a week, extra chores, etc."

And she dismisses old-school punishment as ineffective, anyway. "Waiting until you get home to wallop the kid for something they did a while ago is probably about as effective as pointing at a chewed pillow and hollering "Bad dog," she wrote.

Canadian blogger Catherine Connors of Her Bad Mother has admitted she spanked her daughter after she ran into the street. Once.

"If you're a thoughtful, considerate parent, goes the dominant argument, you would never spank your child. Well, I did spank my child. I'm still not happy about it, but I still don't want you to judge me for it...it's complicated," she wrote.

Martha Mackinnon says she and others will continue to push Canada to join the now 32-strong list of countries that do not allow parents to physically punish their children.

She says while she focuses on the law, just changing the law isn't enough, public education, including the education of immigrants, is a necessary support in the effort to make our growing distaste for hitting kids well known.

"The message needs to be everywhere."

Every schoolteacher, parent or person standing in the place of a parent is justified in using force by way of correction toward a pupil or child, as the case may be, who is under his care, if the force does not exceed what is reasonable under the circumstances.

According to the Supreme Court of Canada's 2004 ruling, the use of force against a child is justified if:

1. it is administered by a parent (teachers may not use corporal punishment);

3. the child is capable of learning from it;

4. it constitutes "minor corrective force of a transitory and trifling nature";

5. it does not involve "the use of objects or blows or slaps to the head";

6. it is not degrading, inhuman or harmful; and

7. it is corrective – that is, not the result of the caregiver's "frustration, loss of temper or abusive personality."

The Supreme Court also ruled that the seriousness of the child's misbehaviour is not relevant in judging the "reasonableness" of the force used.

Is publicly humiliating your child a form of abuse?
August 25, 2011 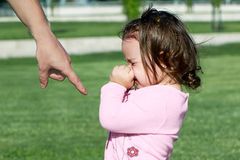 Do genetics make you a harsher parent during recessions?
August 26, 2011
Do mornings with the kids have to be hell?
February 28, 2010 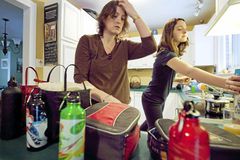