Jocelyn to her good friend, Trina:

"You're letting Lisa go to a co-ed sleepover?"

"I know all the kids. They're good kids. There won't be a problem."

"Trina, I can't believe you're letting her go. You don't understand what can go on. You're way too naive."

Corey's grandmother to her daughter: "You should make Corey get a job. That's the way you were raised. Kids today get everything just handed to them on a platter. He's going to be one of those kids who go out in the world and don't do anything and complain that everything's unfair."

"Mother, that's not true. Corey has a really busy schedule and we don't want to overload him."

"You just watch. See what happens. I know I'm right."

There are few things more aggravating than unsolicited parenting advice from a friend or a relative. It is hard enough raising a teenager without unwanted assistance. What you don't want is somebody questioning what you are doing, when in fact you're not so sure about it yourself. And if they keep giving you advice, it can get into your head. Their words keep coming back whenever you have to make a tough decision. It can undermine your confidence as a parent. Not good.

It would be great if you genuinely could say, "Thank you, Jocelyn. I really appreciate it when you give me helpful suggestions about how I'm dealing with Lisa. Your advice is always wise and on target. I will seriously rethink my decision about the sleepover. Thank you so much."

More likely Lisa's mother will think: "Of course I'm not comfortable with Lisa going on the sleepover. Maybe I am giving in not because I really think it is what's best, but because I just don't want to have to go through all the grief Lisa will give me if I say no. Nobody understands what it's like having a kid like her. I know I don't always do what I think is best, but I only have so much energy. Still, I really do try to do what is best for her."

But Lisa's mother is hardly going to say the above to her friend. "It would be way too embarrassing. She'll think I'm an incompetent mother. Which sometimes I'm not so sure I'm not."

She'd prefer saying, "Thanks, Jocelyn. But I think I'm doing a perfectly competent job as a parent. I appreciate your giving advice, but in future please let me parent Lisa without your comments."

The response: "Really, Trina, I was only trying to be helpful. You don't have to take offence. I thought this was what friends are for."

Or if Corey's mother had said to his grandmother, "Mother, please stay out of it, I really don't need your help."

"You don't have to be hostile about it. I just don't want him to turn out like your brother. I'm just an old woman trying to do what's best for her grandson."

In other words, you do risk hurting their feelings.

Still, it is often best to say something in order to have them back off. Maybe some hurt feelings is an inevitable cost, if you are to do what you need to do in your own best interest as a parent.

But there are ways to say it a little more gently. "Thank you, Jocelyn, but I have given it a lot of thought and this is what I've decided."

Not defensive, but making the point. Maybe Jocelyn will take offence. But that is the chance Trina may have to take.

"Trina just doesn't get it about teenagers these days," Jocelyn says. "But what can I do? All she does is get hostile when I try to suggest anything. It's her kid."

But that's the point. It is her kid.

A good thing to say to yourself when you are suffering from advice overload is something like the following: "Of course I'm not certain I'm right. But I can't always be questioning everything I decide. If I did, I'd never make a decision. Maybe I am screwing her up. But if so, I want that responsibility to be mine. Nobody else's. If she gets screwed up, at least it will be me who did it." 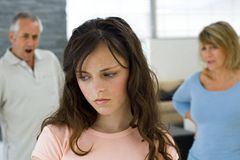