When Emily Bazelon's friends exiled her in Grade 8, the 13-year-old found solace in another bully victim, Allie. The girls had long phone-therapy sessions and sleepovers. Still, on the day when a boy divulged to their packed cafeteria that Allie had stained her jeans with menstrual blood, Bazelon stood silently by as her best friend fled to the bathroom ashamed. "My own 8th-grade cowardice makes me want to figure out how to help other kids do better," writes Bazelon, a senior editor at Slate and author of the forthcoming book Sticks and Stones: Defeating the Culture of Bullying and Rediscovering the Power of Character and Empathy.

Bazelon, a mother of two sons, describes how vividly bullying shapes our formative memories. With powerfully thorough, throat-lump-inducing reportage, she tracks the stories of two young victims and another teenager who faced criminal charges following the suicide of Phoebe Prince, a student bullied in Massachusetts. Through their stories, Bazelon reminds adults about the cruelty with which bullies home in on the weak – for transgressions as simple as a haircut and as complex as a burgeoning sexuality. She also offers parents and schools reams of resources. Here, Bazelon dispels some of the biggest misconceptions about victims and their tormentors.

Bazelon estimates that just 10 to 25 per cent of kids are involved in bullying, and that number includes victims, perpetrators and those who alternate between the two roles. "They're a minority," she said. This point is key to prevention: If you're able to show students that bullying is outlier behaviour, they are less likely to do it. It's a process known as social norming. "One thing that you can do as a school is to take a survey of kids and then put up posters that say '90 per cent of the kids here don't deliberately exclude other kids from the lunch table.'"

The three types of bullies

There are several breeds of bullies, all situated differently on the school social ladder. "One kind of bully is popular, manipulative and often hard for adults to suss out," said Bazelon. These tormentors understand the effect they have on the emotions of others, and "they use that." It's the quintessential "mean girl," although these antagonists can certainly be boys. Another group of bullies are thuggish – "the old idea of the boy who steals your money," she said. "That child is still with us but there are fewer of them because we've gotten much more intolerant of violence in school. Kids aren't beaten up to the degree that they used to be." The final and most worrisome category is the bully-victim who alternates between roles and tends to suffer from the most serious psychological problems. "They are often the kids who do the 'dirty work' for the more popular kids because they're trying so hard to find some social acceptance. For them it's a desperate call for help – social awkwardness played out in lashing out at other kids, which really backfires."

Bullying has a purpose

"Kids often bully because they stand to gain by it in terms of social status. Maybe they're after a laugh from another kid they want to impress, or induction into a clique; maybe they want to publicly distance themselves from a friend they sense is now seen as a loser," Bazelon writes in the book. She describes the work of University of California, Davis sociologist Robert Faris, who mapped out the social networks at several high schools and found that kids who were attacking the reputation of others were moving up socially, especially if they gossiped or picked on someone close to them in the social hierarchy, a purported rival. "This is rational behaviour. It's not good behaviour, but these kids they're trying to get ahead, essentially," said Bazelon. "Once you understand that, instead of being outraged you can start dismantling the environment they're in that is conducive to this bad behaviour."

Cellphones and the Internet have changed the landscape for both victims and harassers, with bullying now unbound by the school-yard fence: "For kids who are targets, it means that instead of getting a break when you get home from school, you're likely to feel – probably correctly – that people are still talking about you online," said Bazelon. For bullies, the Web presents negative consequences too: "You can write something very thoughtlessly, push send and you've created this permanent record in front of a very large audience that feels very wounding to the recipient – maybe more than you intended."

Not all aggression is harmful

Scandinavian psychologist Dan Olweus created the standard academic definition of bullying in 1969: verbal or physical aggression that occurs repeatedly and involves a power differential. That's different from "drama," the back-and-forth conflict most teens engage in, and bullies are different than rivals and adversaries. "It's important for adults to tease out what's really happening. The word bully is very stigmatizing so you want to make sure that you really have reason to use it," said Bazelon. "We need some aggression in the universe, it's a galvanizing force that pushes some people out the door in the morning."

"Adversity," "resilience" and "grit": They're all buzzwords in the current parenting canon, with authors like Paul Tough (How Children Succeed: Grit, Curiosity and the Hidden Power of Character) arguing that childhood hardship paves the way to success later in life. But Bazelon insists there's a line: "Kids need independence, they need to fail and they need room to grow. They don't need to be bullied, though. You can allow for a lot of conflict between teenagers without accepting bullying, a chronic, concerted cruelty. There's really no upside from it."

I was bullied in school while my classmates and teachers watched in silence
May 9, 2018

In the darkest corners of the Internet, bullies and predators hide in plain sight
May 11, 2018 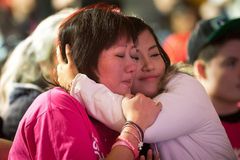