It wasn't my proudest moment as a parent, I can tell you, having to board my four-year-old son's new school bus to wake him up and peel him off the seat back on which his face was planted. Clearly, we had to work a little harder at bedtime. Like, say having an actual bedtime.

There's nothing like back-to-school schedules to knock parents on our heels in a public way. The dog days – and late bedtimes – of summer are gone. Parents are left crying in their coffee at 7 a.m. after late nights spent barricading children in their rooms, caving in and crawling into bed with them or any one of a number of other jury-rigged solutions to avert sleep deprivation.

Getting kids to sleep is one of the dominant parenting woes of our times – just ask author Adam Mansbach, who scored a roaring bestseller with his ode to bedtime defeat, 2011's Go the F–– To Sleep. Scientific researchers are refining what we know about sleep and its crucial function in memory, cognition and general health for all of us. And as they increasingly turn their focus to children and the relationship between sleep, biology and development, the reasons to get it right are only proliferating. It's no wonder modern parents are whining about their perceived failures and grasping for sleep solutions from professionals.

"My phone has not stopped ringing this week," says Tracey Ruiz, a respected Toronto sleep consultant. Ruiz, who goes by the professional handle Sleep Doula, started her business focused on babies, but now says her biggest growth area is the under-10 set. Clients have been desperate enough to fly her across the continent for bedtime triage.

Maybe they read about studies like the one released in July that looked at 9,000 four-year-olds. It found that those who had shorter-than-average sleep times have increasing rates of "externalizing" behaviour such as anger, overactivity, aggression and impulsivity.

"It's becoming a bigger issue because we're all more scheduled, even the kids," says Rachel Y. Moon, the sleep expert who has written the newest book on the subject, Sleep: What Every Parent Needs to Know. "In my practice, I see so many parents making decisions based on emotion and desperation," the Washington, D.C.-based pediatrician says.

Shalini Roy feels my pain. The Toronto mother is in the midst of trying to dial bedtime back to 7:45 for her seven-year-old son, who needs more sleep for his big Grade 3 days.

"It's kind of a stretch – he's moving around, getting his PJs on," she says. "The problem is this year he's into chapter books. It just doesn't end. 'Just a few more words, just till the end of the chapter.'"

Admittedly, she says she often finds herself playing timekeeper while her husband, who oversees bedtime when the deadline gets pushed toward 8:30 or 9. There may be yelling, she allows.

Most experts recommend an average of 12 hours for toddlers and school-age kids. Ruiz says that can mean 10½ for some kids and 13 for others. And all experts stress consistency in sleep and wake times as a way to maintain circadian rhythms – not to mention consistency in how parents approach sleep setbacks.

Valerie Kirk, the medical director of the Pediatric Sleep Service at the Alberta Children's Hospital in Calgary, says about half of her clinic's families are experiencing non-medical sleep problems .

"One person's problem is another person's crisis," she says. "The spectrum of what we see, on the mild side would be a child getting up two or three times a week to one getting up many, many times a night or simply refusing to go to bed."

Kirk says that regardless of the methods out there to get bedtime back on track – from reward-based sticker charts to timers and cut-the-apron-strings techniques – the key is that bedtime become non-negotiable, much like bad-tasting medicine for a sick child or a car seat.

What's more, she says, if your can get bedtime right, other disturbances like nighttime waking will become less likely.

"Non-negotiable" doesn't have to mean they retreat to their rooms and you close the door and ignore them, Ruiz says. Nor does it mean favouring consistency over an extra cuddle. "Your child is not a robot."

And forget laying down the law through gritted teeth when you're frustrated – such as: "You are melting down. You're tired. You have to go to bed earlier."

Instead, Moon suggests talking with your child at dinner or on the way to school about any new rules – when everyone can be more rational.

Many parents I've heard from have summoned up enough rational reserves and enforce an ironclad 6 or 6:30 bedtime.

"I was getting up with them at night when my second was a newborn," she says. She tried the "extinction method," also known as a "modified cry-it-out" approach, advocated by pediatrician and author Marc Weissbluth.

"It's a rush to get home, make dinner, bath them, get them ready for bed," she says, adding that her husband gets home early enough to get the process under way. "But you have to find what works for you."

In our house, we're getting there, 10 minutes at a time. I'm consoling myself with Moon's reassurance: "You are not the first parent of a kindergartener who fell asleep on the bus. It's a big transition."

My son even started waking up five minutes before the alarm this week. We should all get a sticker for that.

The school dress code debate: How much skin is too much?
September 19, 2013 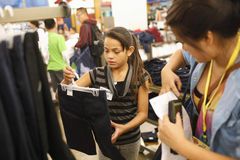 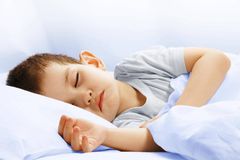 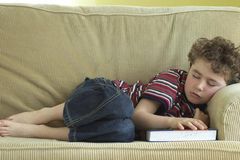