The kids of 24 Sussex: Ben Mulroney's advice to Justin Trudeau

On election night, Justin Trudeau pledged to 'be there' for his children. Those words transported Ben Mulroney to the years he spent sharing his own dad with the nation – and prompted him to offer the new PM some choice words of advice

"There will be some tough times for you as children of a prime minister, but Daddy will be there for you."

When I heard Justin Trudeau speak those words to his kids during his victory speech, it took me back to when my father was given his key to 24 Sussex. We spent nearly nine years there, from 1984 to 1993. I was six when we moved in and 16 when we left.

"What was it like growing up with a dad who was prime minister?" is easily one of the top five questions I get asked. My answer hasn't changed much in nearly 25 years: When you don't know anything different, it's normal. I couldn't remember not having an RCMP detail or dignitaries and bureaucrats traipsing around the house or seeing my father on TV and in print every day. All this was par for the course.

But now, with the benefit of years away from the political spotlight and a growing family of my own, I have a different perspective.

Looking back, I can see that growing up as I did was extraordinary. When times were good, I was a witness to history in the making: I was one of the first people in North America to meet Nelson Mandela. I shook hands with Lech Walesa and Ronald Reagan. I took communion from the Pope and enjoyed tea (and a laser-light show) at Buckingham Palace.

The good times included Halloween, which at "24" was a sight to behold: We had a healthy rivalry with the Governor-General, with each home trying to one-up the other in terms of decorations and goodies. The grounds of Government House were closed for a period under Jeanne Sauvé, giving the Mulroneys a clear path to Halloween victory: bales of hay, smoke machines, spooky lighting and sound effects, plus hundreds of individual goodie bags full of homemade candy apples and full-size candy bars. When the Hnatyshyns moved in, they reopened the grounds and the Halloween battle was back on, raising the stakes – and the fun for all the kids in the neighbourhood.

When times were less happy, we leaned on each other. There were a few bomb scares and death threats that resulted in impromptu days spent playing hooky and invading my father's office in the Centre Block of Parliament Hill. If the House of Commons wasn't in use, we'd get tours, sometimes taking turns playing a very nerdy game of Question Period. (Fun fact: The Speaker's seat is actually motorized and can be raised or lowered, depending on the height of the Speaker.)

Bad headlines, political battles and election campaigns – take your pick. A life in Ottawa is a series of struggles. And yes, one of them was that my dad was away a lot. Could it have been more than half the time? That seems entirely possible: Between international summits, meetings with premiers, announcements and official functions across the country, never mind the laundry list of party responsibilities – there were never enough hours in the day.

Growing up at 24 Sussex was “extraordinary,” writes Mulroney.

Justin has pledged to "be there" for his kids, and I naturally wonder what he means by that. If he means he will be physically present, I hope the government's got some cloning technology the public's not aware of, because his time will be one of the rarest commodities around.

That said, Justin could very well be a new breed of politician. He told me some time during the middle of his campaign that when the writ dropped, he instructed his team to work him harder than any politician they've ever worked with: He would cover more ground, shake more hands, give more speeches and meet more Canadians than anyone on the ballot. But that deal also came with the promise that, at the end of the day, whenever that came, he would have uninterrupted family time: a chance to decompress, enjoy their company, work out and sleep.

So maybe his plan is to carve out time each and every day to be with his kids. This is a laudable goal. It will also be impossible to achieve, unless he counts on

FaceTime and Skype to bridge the gaps that the job inevitably will place between them.

In parenthood, intent means so much. Kids can feel intent. My parents weren't always around, but I knew they wanted to be. I could hear it in their voices on the phone, I could feel it in their hugs upon their return from a trip and I sensed it in the time we did share together.

Like Justin, I've got three kids, and they don't see Daddy nearly as much as Daddy wants to see them. Granted, I don't have a government to run, but from a child's perspective, my job description matters little. Whether I'm travelling for weeks at a time during awards season, hosting a charity event after work or simply working late on etalk, my kids often go to bed and then wake up without seeing my face. I realized early on that it was not about always being present all the time, it is about always being a presence.

The Mulroney family gathers for breakfast: ‘My parents weren’t always around, but I knew they wanted to be,’ Ben Mulroney says.

I believe I know Justin well enough to say that he will do everything in his power to be as present as possible in the lives of his kids. And if I could offer a single piece of advice, it would be this: Pick your spots.

I was not allowed to watch TV on weeknights growing up (and look where I wound up!). However, I discovered a loophole in my parents' rule: If my father was watching the news (which he did every night), surely I could not be turned away. And so, nearly every night that my dad was home, we would meet in his den – me on the floor, him in his armchair – and we would cycle through the biggies – CTV, Radio-Canada, The National and The Journal – chatting about our days during the commercial breaks.

Was he around every day? No. But then again, I don't remember every day. I remember the days that make me smile, the ones that inspire me, the ones when I learned something worth holding onto. And most of those days involve a memory of my father. My dad picked his spots. And because he did, my childhood memories are enveloped in him.

And so I am hopeful that when all is said and done, and Canada elects a government led by someone other than Mr. Trudeau, his children will have seen as much of their dad as was possible. I hope that when they did see him, they saw a devoted father who wanted to be nowhere else than with them. And when they could not see him, I hope they felt his presence with them. And finally, I hope they remember the bad times as they will the good ones: as a family.

Ben Mulroney is the anchor of CTV's etalk. 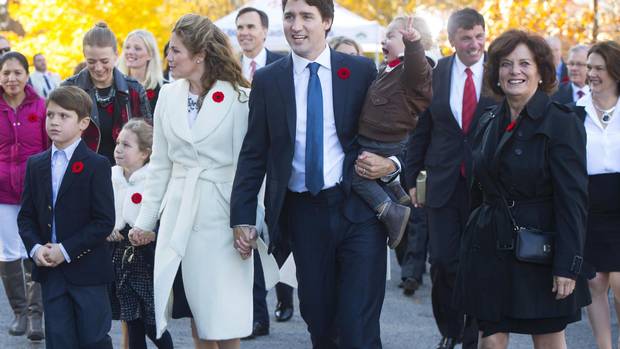 More parenting tips for the Trudeaus

We expect more of prime ministers and their families than ever before. Are they relatable? Accessible? What's their Instagram like? If the Trudeaus want to nail the role, writes Dave McGinn, they should follow the hints in this first family's guide to parenting

Justin Trudeau walks with his wife, three children and mother on the day of his swearing-in ceremony in Ottawa.

DO check your privilege

Trying to be a man of the people is not easy when you're running a country. Having a famous last name makes the task even more difficult. But it's essential for that all-important quality of modern political leadership: relatability. Start by not sending your kids to a fancy private school (especially since that can make talk of education policy and providing "the best for our children" seem hypocritical and elitist). Look to David Cameron as your guide. Last year, Cameron confirmed he would become the first Conservative prime minister to send his child to a public secondary school.

DO play the role of Dork-in-Chief Big climate-change summit coming up? Gotta sort out a messy Senate? We get it – you're a busy guy. But you're a dad first, and that means constantly playing the role of doofus. Make sure to remind the press as often as you can how much you embarrass your children. President Barack Obama has played this card more times than he's cursed the name Vladimir Putin. From an interview with People magazine where he said he did the Gangnam Style dance to embarrass his daughters to dropping dad jokes during his annual turkey pardon, Obama has mastered the humble, adorable art of being the doofus-in-chief better than anyone.

DON'T ignore the glamour factor The words "glamour" and "Canadian politician" go together like "Vic Toews" and "fuzzy-wuzzy cuddles." But modern first families are expected to uphold a precise level of elegance: You can't have so much of it that the rest of us could never afford it or aspire to it, neither can you have so little of it that you are ever caught wearing sweat pants. Michelle Obama wearing J. Crew is a good star to steer by, but Will and Kate are the epitome of the glamour level we expect from families that represent the state. They are always polished and stylish, but to a degree you think you could achieve if you just put in enough effort. And thanks to that right aspirational level, you also think you could be friends if you ever got to hang out.

DO get a pet Stephen Harper had a cat named Stanley and a chinchilla named Charlie. Meanwhile, U.S. presidents have no choice but to get a dog for the family. Why? Because nothing humanizes a powerful clan like taking the beloved Labradoodle (or whatever breed you choose) out for a walk or scratching its belly. Doing so says, "First families – they're just like us!" Of course, you need to pick a pet that is appropriately adorable. Nothing vicious or exotic. And that means no pythons for 24 Sussex.

DON'T neglect social media Have you been on Facebook? That thing exists for moms and dads to brag about their kids and complain about the hardships of parenting today. We want to see first families live their lives IRL (in real life) but we also expect to see them being genuine and awesome on social media. Trudeau's Instagram is crushing it right now – pics of him and Sophie with the kids at a park, a pic of him paddling the Bow River, a fantastic snap of him in the DeLorean from Back to the Future. This kind of insider, unfiltered view to a first family's personal life is an essential part of connecting with voters, even if it is carefully curated. #keepitreal