At the age of 49, Sasha Padron has realized this is the life she always wanted: living among cows and goats, gutting the chickens she raised herself, surrounded by nature on a Trent Hills, Ont., farm embellished by walnut trees and an old barn, with its long, crooked driveway that bedevils the snowplow.

It’s not the life she always had: For years, she worked as a doula and yoga instructor in Toronto, with a studio in the back of her home. Her husband, Steve Donald, 58, is a musician. The family had often complained, she says, about returning to the heat of the city after vacations spent enjoying the cool, slow pace of the country. But when her two boys were young, the timing felt off. Then Steve’s father died: One day, not long after, he looked at her and said, “Sash, if we are going to do this, let’s do it. Life is precious.” They sold their house and, in December, 2012, found their 95 acres near the Central Ontario village of Warkworth, 40 minutes north of Cobourg. 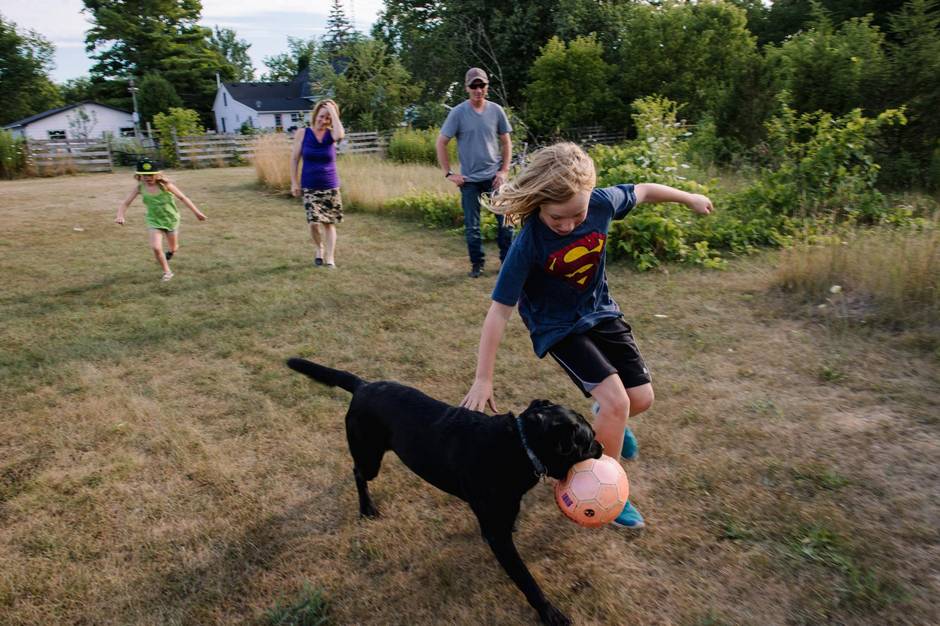 Bree Seeley, her husband Franc Madden, daughter Billie and son Beau play in the backyard of their home in Prince Edward County, just outside Picton, Ont. (Johnny C.Y. Lam for The Globe and Mail)

Canada is a country of city-dwellers who escape, if we can, each summer to the country – that place where life moves slowly, the sky actually reveals its stars, and where, when you jog along the road, the drivers wave as they pass. How many of us dream when we are there: Why don’t I stay? Could I make this work? What would I do for work? Most of us return to traffic, big mortgages and the urban rush, believing it impossible.

But what you quickly learn from the people who do run away is that not only is it possible, it can be transformative. Their stories put a lie to the narrative that small towns have no economic opportunity – indeed, they describe small communities as places that inspire creativity and are welcoming to small business. Their advice is consistent: Be flexible. Set aside your image of wealthy Bay Street executives swanning off to rural mansions – money helps (doesn’t it everywhere?), but finding the right place, being open-minded about work and willing to immerse yourself in the community is more important. The city is where we are so often planted, by work, family or happenstance. The country, the beach, the small town – this is where runaways choose to grow. 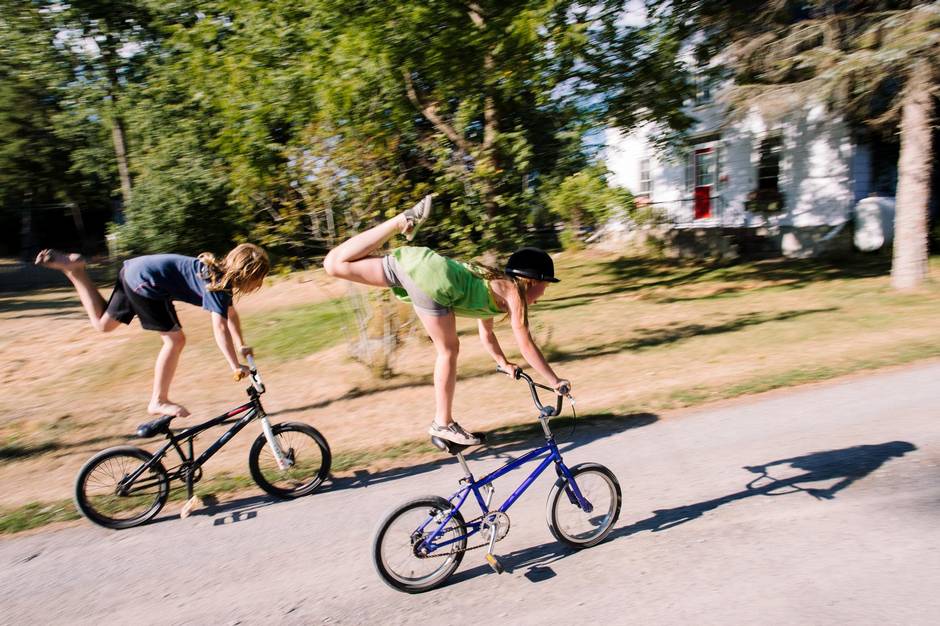 Last week, as another lot of doomed chickens lost their heads in her backyard, Padron detailed the perks of living the pastoral life. This includes, she says, a shift away from consumerism, days lived at a steadier pace, a sense of community. (The 11 cows and three goats belong to a neighbouring farmer, who rents their barn and pasture.) The family still owns a small condo in Toronto, partly for their sons, who are now young adults and work in the city. But as time passes, she says, and her ties in the country grow deeper, the city feels farther away.

Each season, she is less an urbanite who bought a farm and more of a farmer preoccupied with the foxes and coyotes stealing her chickens and the barn that needs repair. “There is still a lot I can’t see,” she says, “that I can’t imagine, but there is a big unfolding of our lives that is happening here.” 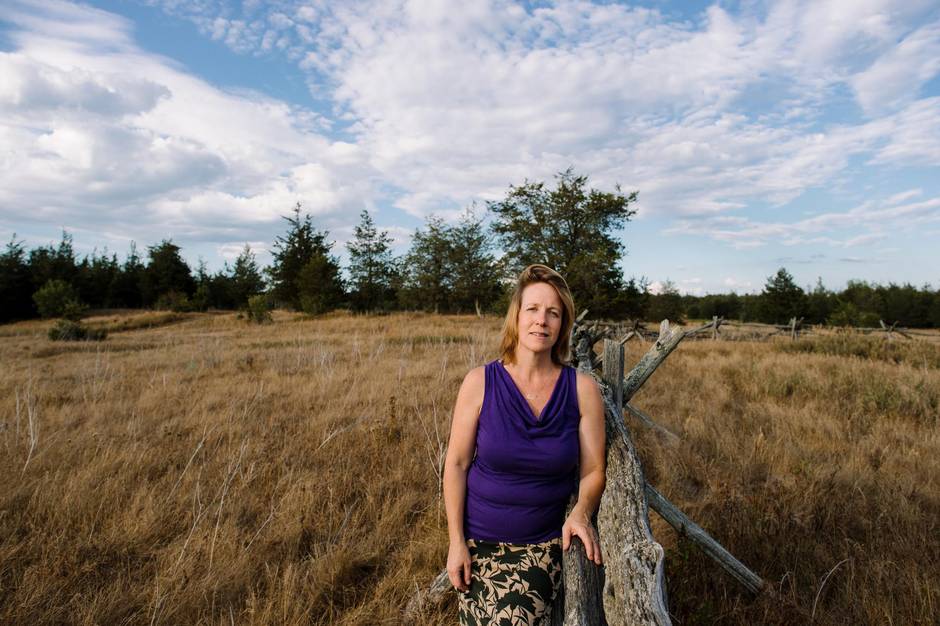 Bree Seeley is photographed in a farmer's field behind her house in Prince Edward County. (Johnny C.Y. Lam for The Globe and Mail)

For Bree Seeley, 44, who also lived in Toronto and worked in publishing not so long ago, fulfilling a dream to live in the country was also a financial decision. In the city, Seeley and her husband, Franc Madden, 56, who builds models for TV shows and movies, were feeling the pinch. “When you are financially a bit on the ropes, Toronto is not a fun place to be,” she says. “Sometimes it’s easy to see in Toronto that we are all being groomed to be maximum consumers.” But being broke, she says, is one thing; being bored is another. “I needed an adventure and this was the adventure we could afford.”

Four years ago, they looked at 31 properties, before choosing their three-acre piece of land in Ontario’s Prince Edward County, with a house set off the road. There, she tends bees and a vegetable garden as large as the footprint of her former city house. She also rents a commercial kitchen for a preserves business she has started called the County Yum Club. Madden works remotely and is helping a local organic farm re-engineer its tractors to run on electricity. 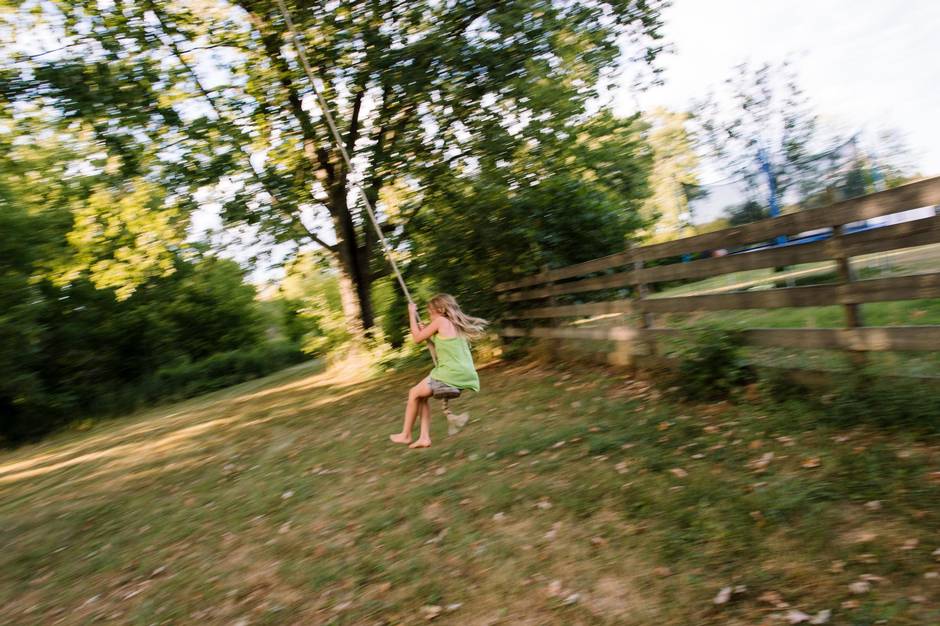 Billie Madden plays in the backyard. (Johnny C.Y. Lam for The Globe and Mail)

Their children, Beau, 10, and Billie, 7, roam widely with their walkie-talkies. In Toronto, cars often raced on their street; she didn’t even like it when the kids played alone in the front yard.

In the city, she says, she never would have been able to start her own business. “You can’t stop and catch your breath, you have to be earning.” But in the country, she says, “it is a very blank canvas and you can pretty much make anything happen for yourself.” In her community, she says, the mechanic is a farmer and her doctor is also a vintner; the person working cash at the grocery store during off-season is a small business owner. This resourcefulness is contagious and freeing. 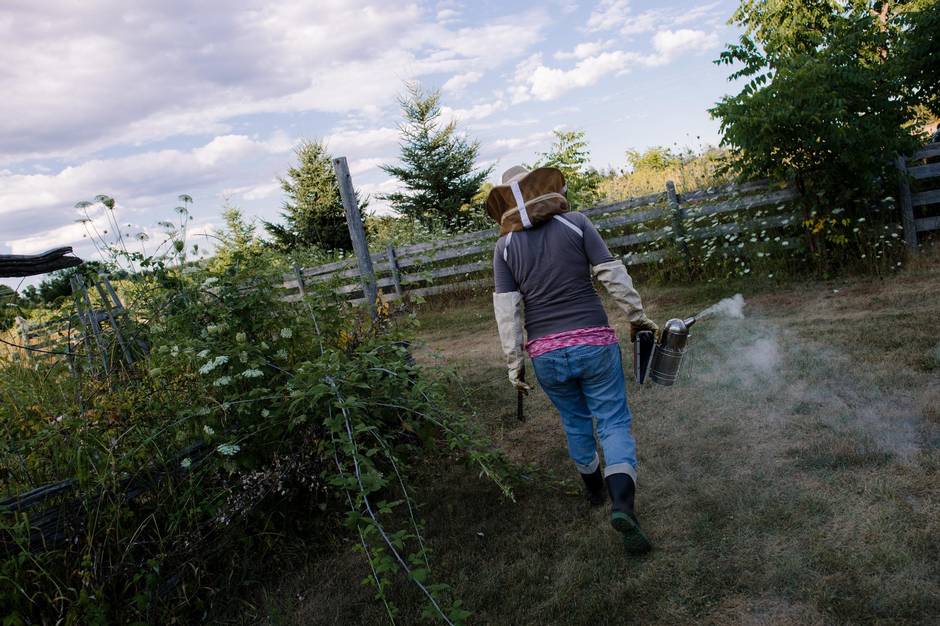 Bree Seeley carries a bee smoker to her hives. She keeps bees in her backyard and use the honey in some of her products. (Johnny C.Y. Lam for The Globe and Mail)

“We have come out here to have the most productive time of our lives,” she says. “We are not here to take it easy.”

Many transplants find that the country can facilitate small businesses in a way the city doesn’t, by providing cheaper rent, less red tape and more community support. Catherine Summerfield, 54, a single mother and aesthetician, recently sold her home in Niagara Falls, Ont., and moved to Lunenburg, N.S., to open Just a Little Dinghy, a shop that sells smoothies and jewellery, as well as some aesthetic services.

After visiting Lunenburg years ago, she often imagined returning to the historic seaside town to live. When her two daughters were grown, she decided the time had come. “If I sat there and planned and waited until I had every penny I needed, something would happen to screw it up,” she says. “The longer you think about it, the more problems and excuses come into your head. Just jump.” 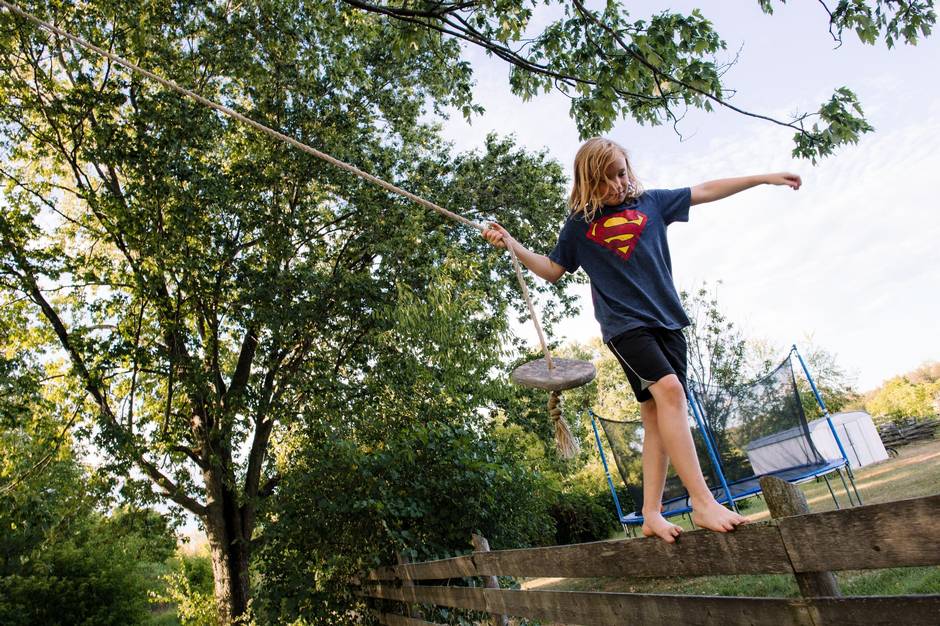 Beau Madden plays in the backyard. (Johnny C.Y. Lam for The Globe and Mail)

But leaping doesn’t preclude at least some planning, points out Nora Dunn, who was 30 years old in 2006 when she quit her Toronto career in financial planning to travel full-time. As she puts it, “The thought of committing another few decades to the work force, while ‘putting in time,’ until retirement, seemed impossible. … I just knew I had to go and the rest would sort itself out.”

Before going, she sold everything she owned – including her business and her car – and broke the lease on her Toronto loft. She reduced her life to six boxes of precious items that went into storage and one full suitcase. She did some research – finding how she could save on rent by volunteering or housesitting – and watched for travel opportunities to places such as Hawaii and Australia. Starting in September, she will house-sit in Ecuador for two months.

Currently living in Peru, Dunn works as a freelance writer to cover costs; her blog, The Professional Hobo, is all about “financially sustainable” travel. She has a retirement nest egg to count on later and was debt-free when she started out. After 10 years, she has no regrets. “I can go anywhere I want.” 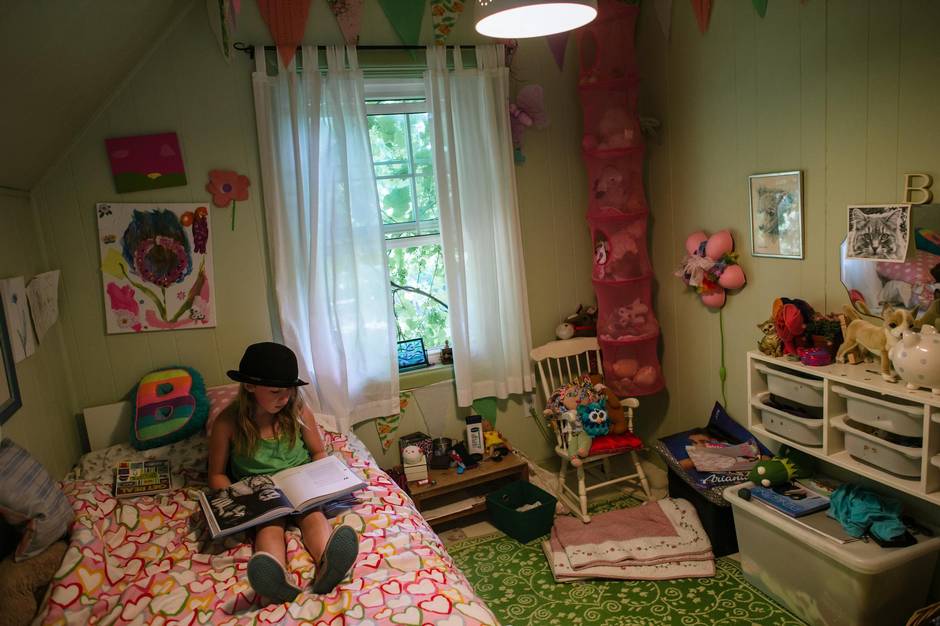 Billie Madden reads in her room. (Johnny C.Y. Lam for The Globe and Mail)

There are some trade-offs to running away from city life. “You get and you give away,” Seeley says. There’s a fair bit of driving, since there isn’t a subway station down the street (on the other hand, she notes with a trademark country brag, a parking ticket is only $7). And, she notes, come-from-aways had best leave their city attitude behind. “Mind your manners,” Seeley advises.

Four years in, Prince Edward County is where she wants to stay. “I have moved 28 times,” she says of her former penny-pinching, city-slicker life. Of the place where she has now landed, she declares, “I plan to haunt this house.”

Globe Life wants to hear your story of running away from city life. If you’ve got a tale to share, send it to reporter Dave McGinn at dmcginn@globeandmail.com.