The best joke my five-year-old daughter tells goes like this: "This is a joke about nothing – the end!" When she hits that punchline, boom, peals of laughter erupt from her. She hasn't read any Heidegger yet, but the joke has an ontological brilliance I love.

The best joke my two-year-old son tells, based on how funny he thinks it is, goes like this: "Poop!"

Granted, it's not high-concept. But both jokes are signs the kids are right on track, developmentally speaking. Their love of jokes might even portend much more: A sense of humour in children has been linked to intelligence, creativity, empathy, popularity and resiliency.

"It's really important to think about 'How does humour develop?' I've worked with kids for a very long time now, and the kids who don't get the jokes are the ones who have trouble socially," says Dr. Margaret Semrud-Clikeman, a professor of pediatrics and division head of clinical behavioural neuroscience at the University of Minnesota.

Humour is a notoriously difficult subject to study, particularly in children. After all, there are no objective standards defining what's funny. But a handful of recent studies have shed important light on the link between humour and a child's development, with particular focus on its social aspects implications.

"You can plot development through kids' ability to understand and make sense of humour," says Dr. Steven Schlozman, a clinical psychiatrist at Harvard. "As their brains get bigger and as their corresponding developmental capacities enlarge and broaden, their ability to appreciate different kinds of humour changes."

Children's understanding of humour follows a typical progression from peak-a-boo and nonsense words on up to puns and double entendres and beyond. The "joke about nothing" zinger, for instance, reveals both an understanding of "sequencing," that stories have a beginning, middle and end, and a capacity to play with that concept, Schlozman says. In a study published in the Journal of Neuroscience in 2012, researchers found that the same parts of the brain that light up when adults find something funny are active in kids as young as six, although they are not yet well-developed.

As studies using magnetic resonance imaging technology have shown, humour typically activates both the left hemisphere of the brain, which is responsible for processing language and allows a person to understand a joke's literal meaning, and the right hemisphere, which decodes the context and nuances of word play.

In 2007, Semrud-Clikeman and colleagues conducted the first brain-imaging study of how children age nine to 16 with high-functioning autism process humour. As they discovered, children with autism did not show the same level of activity in the brain's right hemisphere. As a result, they tend to interpret jokes literally, and do not "get" the humour.

There may be many explanations why a child doesn't seem to respond to a joke, says Schlozman. Perhaps he is depressed; perhaps he just didn't think it was funny. But if a child consistently fails to see jokes or other forms of humour as funny, that should be a red flag to parents.

"There's all sorts of possible reasons, but you should stop and take notice," Schlozman says.

It could be a sign of being on the autism spectrum. Kids with attention deficit hyperactivity disorder also often fail to respond to jokes, Semrud-Clikeman says. "There is a strong link between humour and mental health, and the ability to see things from different perspectives," she says.

As kids approach their teen years, it may also be important to pay attention to what kinds of humour they tend to favour. In a study published last year, researchers at Keele University in Britain found that children who use what researchers called "self-defeating humour" – defined as disparaging themselves and making themselves the butt of their own jokes – were more likely to be bullied by peers.

The study of more than 1,200 kids age 11 to 13 also found that some children were able to use humour to reduce anxiety and laugh at something that might be frightening. This is why researchers say humour is not only an important developmental indicator, but also a key component of resiliency as children try to navigate the difficult period of adolescence.

Most parents are happy to joke around with their children and encourage their sense of humour. But not all do.

"There are a lot of parents – typically more traditional, more conservative type parents – where it's a very authoritarian household and children are supposed to be obedient, not to be assertive and certainly not to use humour," says Louis Franzini, emeritus professor of psychology at San Diego State University and author of Kids Who Laugh.

Those parents are doing their children a disservice, given all we know about the links between humour, mental health and social development, he says. Turns out kidding around is so much more than just joking.

Children start to understand humour earlier than you might expect. In 2012, researchers at Johnson State College in Johnson, Vt., found that kids have a sense of humour by age one. After that, their funny bones develop along a fairly predictable timeline.

What's so funny? Absurd events and behaviour, such as parents bouncing a ball on their heads and saying silly words.

What's so funny? Rhymes, nonsense words and the element of surprise. Potty humour.

What's so funny? Incongruity, such as a picture of a bike with square wheels or a cow that says "oink."

What's so funny? Slapstick, exaggeration, and simple jokes with a classic set-up followed by a punchline. As they get older, they will also show an appreciation for puns and other forms of wordplay. From there, they will begin to understand sarcasm, as anyone who's been sassed by a seven-year-old knows.

Throwback summer: Tell your kids to get lost until dinner
June 26, 2014 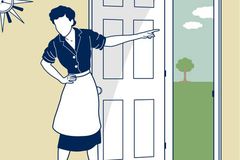