When Flavio Branco's family is home, he's forced to turn down the dial on his stereo from seven to four (out of 10). But even at that volume, the mix of rap and heavy metal from Rage Against the Machine reverberates through the 19-year-old's Mississauga home.

His father always complains, "Turn that down - you're going to go deaf!"

It's a parental grievance that has spanned generations, but parents of today's teens may have good reason to be concerned.

A study published Wednesday in the Journal of the American Medical Association suggests hearing loss among U.S. adolescents aged 12 to 19 has increased significantly in recent decades.

Researchers in the Department of Medicine at the Brigham and Women's Hospital in Boston analyzed the results of hearing tests done as part of one National Health and Nutrition Examination Survey conducted between 1988 and 1994 and another done between 2005 and 2006. They noticed an increase of about 30 per cent in cases of hearing loss in the second group compared to the first.

While scientists haven't completed any similar surveys of hearing loss among Canadian adolescents, experts suggest the same thing is likely happening on this side of the border.

"When it comes to the listening habits of youth, there's no difference between the U.S. and Canada," Gael Hannan, a program manager at the Hearing Foundation of Canada, says.

Josef Shargorodsky, the study's lead author and a researcher at Brigham and Women's Hospital, notes the surveys did not explore the specific causes of the measured hearing loss, though it can be caused by antibiotic or medication use, fluid in the ears and noise exposure. That last factor has been the subject of much research in recent years, spawned by the habits of the iPod generation. While most studies have been small, they suggest listening to music through headphones can cause damage to the ears.

Most of the hearing loss measured in the adolescents studied was mild, Dr. Shargorodsky says, which could be why so few identify it in themselves.

In 2008, the Hearing Foundation of Canada conducted a survey of 150 teenagers in which they measured the volume they were listening to music with a sound meter. They found that 30 per cent of them exposed themselves to noise at levels and durations that were hazardous (above 90 decibels).

"If you're listening to music with headphones and you cannot listen to what your friend is saying, it's too loud." Ms. Hannan says.

The prevalence of earbud use - the headphone of choice for most iPod and iPhone users - is part of the problem, she adds.

"They go farther down in the ear canal and that increases [intensity]four to five decibels."

Mr. Branco says he uses the standard issue white earbuds when he's listening to music on his iPhone - usually about two hours a day. As the bass player in a garage band ("we like making music that gets people head banging"), he also exposes himself to intense, high frequency noise during practices and shows.

Mr. Branco has never had a hearing test, but he doesn't think he's doing any real damage to himself.

"The only time I notice my ears hurt from volume - that ringing - [is]when we get off the stage [after a show]or from a jamming session," he says.

Margaret Cheesman, a researcher and professor at the National Centre for Audiology at the University of Western Ontario in London, Ont., says many adolescents are unaware of how hearing loss develops.

"I don't think people know about this being cumulative," she says. "You go to a rock concert today, you have some ringing in your ears afterwards. Your ears tend to feel like they recover a lot between these exposures."

But listening to high-decibel noise for extended periods damages the hair cells - sensory receptors - in the inner ear, she says, and the kind of hearing loss that results from that is irreversible.

In the eighties and nineties, when the first hearing tests included in Dr. Shargorodsky's study were completed, most teens were likely listening to music on devices such as portable cassette or CD players, Dr. Cheesman points out.

"The biggest concern now is that people can put movies and music - hours and hours and hours of it - on a device. You can plug yourself in and, if you're so inclined, turn up the volume for hours," she says.

The notable increase in hearing loss may be reason enough to start screening in schools, Dr. Shargorodsky says.

Hearing screenings aren't mandatory in schools, but the Hearing Foundation of Canada runs a program called Sound Sense, in which presenters teach grade 6 students about the dangers of noise exposure.

"Once they get to 12 it's the noisiest time in their life," Ms. Hanan says.

One Sound Sense recommendation is to keep the volume dial below the halfway point on personal music players, but Ms. Hanan says it can be hard to convince adolescents that such a habit can make a difference. Mr. Branco, for one, says his iPhone volume is always set at maximum.

"I'm in a band and music's a big part of my life," he says. "I guess if my hearing starts going, it'd be a concern. Until then, I'm going to keep living and rocking out loud." 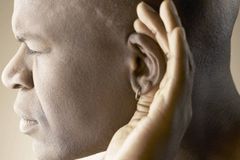 Is your iPod damaging your hearing?
September 28, 2009