Our bus climbed slowly up a steep, narrow incline. The walls felt so close; the roadway was just wide enough to allow two vehicles to pass. There was a certain authenticity to the broken concrete, the open windows, the patched roofs.

Partway up this winding pathway, we made a left turn through a gate. We had arrived at the place where my daughter spent the first 11 months of her life.

Like all families, ours has a unique narrative, perhaps more circuitous than some. From paperwork to travel visas to our adoption trip in 2002, we followed a road less travelled. Our early fears over bonding and attachment, low muscle tone and delayed language development have slowly given way to the more traditional parenting concerns of friends, eating habits and homework.

But we remember, always, that there is a part of our daughter's life that doesn't include us, a chapter that came long before the 18-hour flight and the hugs, tears and balloons in the airport arrivals lounge. So it was always our plan to return to China, where her life began, and visit the orphanage where she lived as a baby. To find missing pieces of the puzzle. To give shape and form and colour to what until now had been words and images from books or the Internet.

Last August, eight years after our original trip, we made the journey with other families with whom we had travelled in 2002. We had talked to the children about what to expect, how they might feel returning there.

Getting off the bus I felt nervous. I squeezed my daughter's hand and composed myself. Before us was a gleaming, modern structure. We had been told that the orphanage had undergone renovations in the past few years. This new building seemed out of place in these otherwise humble surroundings.

Behind this imposing structure was the original building where our children lived as babies. It was still there, tucked in behind like a shadow, not quite visible. A memory.

We began our visit in the new building. In the grand foyer, we looked up and saw the nannies lined up on the balcony of the second floor, watching us and waving, both tentative and curious. Did they see the babies they once held and comforted in these beautiful, healthy girls, all long limbs, shining hair and smooth skin? Maybe. I was hopeful. It was so important that a connection be made.

The vice-director took us into a large boardroom where we were presented with the girls' files, complete with all the information available about each one. We recognized photos, medical reports. Our translator helped us with some of the documents.

We were eager to visit the old building, to see the rooms where our children stayed as infants. We learned it was now home to senior citizens. As we climbed the building's crumbling stone steps and wandered the outer hallways, two or three elderly people walked behind us, confused at the spectacle, curious.

At the end of the hall on the second storey, we saw a white doorway painted with rainbows and clouds and castles. We learned that behind this door, our children ate, slept and played in the months before we brought them to Canada to join our families.

I looked at the doorway, trying to see behind it, to move back to a time when our children had different names, were soothed by different voices, were unknown to us. It felt impossibly distant, inaccessible really. The children - slightly stunned and wilting in the humidity - smiled for photos in front of the door.

Abby, our daughter, was eager to see babies, to hold them. We returned to the new building, to the bright and air-conditioned nursery where the children now reside. We spent nearly an hour there. The girls took great delight in the babies, carrying them about and kneeling by their cribs to hold tiny fingers.

Eventually, we were joined by nannies, the ones we had seen watching us earlier. They gathered near the doorway, chatting among themselves. I sensed they were overwhelmed as we surrounded them eagerly, asking questions through our translator, waving baby photos and urging our children to say hello - ni hao.

I saw one of the women point at Abby, her gaze only briefly meeting my searching eyes. I offered Abby's Chinese name and she nodded sharply. This was the moment I had been waiting for.

Abby moved in and hugged the nanny tentatively, and I watched the back of her glossy head as her arms closed around the woman's shoulders. They stayed there briefly, perhaps a moment longer than I might have expected, and I saw at last that this mattered to Abby, too, this connection. She was known. Remembered. Somewhere a piece of a complex puzzle fell quietly into place.

The nannies and vice-director escorted us outside, and we said our goodbyes and boarded the bus. I watched the disappearing forms of two nannies as they made their way along a path to the main street, arm-in-arm under a parasol, unaware of me. I looked wistfully at my daughter, for whom the enormity of these past hours had been easily replaced with giggling and singing and jostling for a seat on the bus. I was filled with gratitude and an emotion I could not quite name.

This feeling remained. And with it, a sense of wonder.

Unearthing the roots of adoption
May 2, 2018 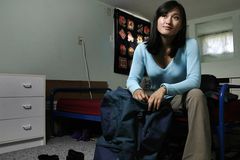