Laurie Strongin knows what kind of mother would go to any lengths to have a baby who might save another child's life.

Her son Henry was born with Fanconi anemia, a disease that causes bone-marrow failure and is almost always fatal. While Henry's white blood-cell count plummeted, Ms. Strongin underwent extensive in-vitro fertilization, receiving 353 injections and producing 198 eggs, in an attempt to create a genetic match who could be a stem-cell donor for him.

She and her husband, Allen Goldberg, were among the first couples to use this controversial technology.

But every attempt failed, and in 2002 at the age of 7, Henry died of complications after a bone-marrow transplant from an anonymous donor.

Today, Ms. Strongin supports genetic testing on embryos and explains why people can stop worrying about "saviour siblings" being harvested for spare parts.

Your new book, Saving Henry , combines exhaustive medical details with vivid anecdotes about your son, such as his love of Batman costumes and cherry-cola Slurpees. Why did you write it?

I wanted my two other sons, Jack and Joe, to really know how hard we fought to save their brother's life, and to get to know him better. Another reason is that stem-cell research and embryonic stem-cell research and "designer babies" are talked about in abstractions, and I wanted to humanize these important issues by talking about them in the context of Henry's life.

People have no qualms about getting pregnant to provide a playmate for their first-born. Why do they recoil at the notion of creating a sibling who could save a child's life?

In our case, we were a couple who desperately wanted to have a third child, and a child who would not be born with a fatal disease. The fact that that baby could also save the life of an older sibling - I mean, think of that, to be born a hero - is a pretty amazing thing as well. But I think simplifying what we did to be just creating a baby to save another child is a very incomplete picture.

What kept you going through nine failed cycles of IVF?

Well, the survival rate for bone-marrow transplants with the kind of Fanconi that Henry had, in the absence of a sibling donor, was zero. [Her second child, Jack, who was conceived naturally before their attempts at IVF, was not a genetic match.]And so this technology was really a matter of life and death for our family. It's true that each time it didn't work it was devastating because the stakes were so high. But the hope that it provided was a very powerful motivator.

Your doctor did genetic testing on three-day-old embryos of about eight cells. How should this technology - pre-implantation genetic diagnosis (PGD) - be used responsibly?

To me, to use it to screen out fatal childhood illnesses, it should be embraced. I also believe in using it to find a genetic match, because these are life-saving technologies. But using PGD for parental preferences like eye colour or hair colour or the propensity towards a higher IQ or better sports ability is a real abuse of this technology.

Ethicists worry that couples might terminate a pregnancy after taking cord blood from a fetus to save an older child. Do you think this is a legitimate concern?

No. I think if you've got a child who has serious health challenges, you understand the preciousness of life. I would rather the conversation centre on the right and proper use of this technology instead of fears of something no reasonable person would ever do.

The movie My Sister's Keeper , based on Jodi Picoult's novel, is about a "saviour sibling" whose health deteriorates because she is forced to supply vital tissues to her chronically ill sister. How realistic is this story?

It was so extreme. I think that, yes, the book provoked conversations about this important medical development, but it stoked a lot of fears that are not based in reality.

After all those invasive IVF procedures, you got pregnant naturally with your third son, Joe, who was not a genetic match for Henry. How did you make sense of this?

It was too late. Henry had already had his transplant at that point. When we started this process and said we wanted to have a third child, we really meant it.

If you had succeeded in creating a genetic match for Henry, only the baby's cord blood would have been donated to him, right?

That is correct. Typically at birth, [doctors]tie off the umbilical cord and throw it away as medical waste. The only difference between that and what we intended to do was that before throwing it away, they would extract stem cells from the cord. There is literally no harm to the baby whatsoever.

Are there cases in which other parts of a sibling's body are used down the road?

You have become an advocate of stem-cell research. Why?

Upwards of half a million frozen embryos are in IVF clinics around the United States and the vast majority of those will never be used. So instead of throwing them away [when they expire] why don't we donate them to research? In the case of our embryos, the ones that had Fanconi anemia offer doctors the potential to see what this disease looks like in its absolute earliest stages, and with that knowledge they can work towards curing this illness. These are not embryos that are going to be adopted and produce a child.

What do you hope Henry's legacy will be?

I hope more and more children will be born using this [PGD]technology and fewer families will bury their small children. And that people who read this book and get to know Henry will think about the incredible contribution that one person can make and the impact that one life can have. And maybe live their lives a little differently - a little better, a little kinder, a little more meaningfully. 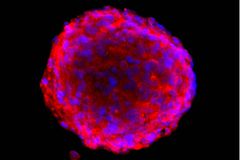