This year, my 10-year-old son has begged to be allowed out on his own with a gang of friends for Halloween. No adult tagging along, not even a discreet 12 steps behind. My husband was willing, in exchange for a share of the loot. I hesitated: He often walks home from school, but never after dark on a candy rush. And as any media-saturated parent knows, the real spooks on Halloween night are deviant strangers lurking in the shadows (or hiding behind some unknown neighbour's front door), poisoned Tootsie Rolls and distracted drivers. Who says the night of trick or treating is all about scaring the kids?

But maybe parents like me are scaring ourselves silly. Lenore Skenazy, the controversial author of Free-Range Kids, who famously earned applause and scorn for allowing her nine-year-old to ride the subway alone in New York, says the idea that a parent wouldn't happily set their child free to haunt the streets on Halloween is just one more sign of how overprotective we've become about our kids' safety. The rise of indoor Halloween parties in lieu of trick or treating especially irritates her. After all, what's the take home? That one night a year, the neighbours really do turn into psychotic child killers?

"When you say, it's all too dangerous because your children don't know how to cross the street, and all your neighbors are awful and they might want to kill your child, then you are giving up on your neighborhood and your child." You are also accepting, points out Ms. Skenazy, that your parenting is so lousy you haven't taught your daughter well enough to use her own wits, and refuse a stranger's request to come inside their home.

Still, the right age for an unsupervised Halloween is the subject of debate. Last year, parenting experts on the Today Show agreed on 13 years old – even though some U.S towns have tried to cut off trick or treating at age 12. (So you can't go out alone until you're old enough not to want to go out at all?) Kirsten Gane of Safe Kids Canada holds firm on 9, the age when research shows most children are mature enough to act safely, even in the excitement of the evening. Ms. Skenazy sets an individual benchmark: "If your parent let you go out at a certain age – and your child is at least as intelligent and competent as you (which most parents like to think that their kids are), why wouldn't you give them the same opportunity, considering the dangers are exaggerated and the joy is not?"

Haylie Langwald, an Edmonton mom, says there's no way her seven-year-old daughter will be heading out alone. At 10, however, she'd consider it – with a responsible group of friends and a time limit. "I have a few worries," she wrote in an e-mail, "from strangers wandering around, to neighbours inviting my child inside (and because they live close by they go in willingly), to my own children acting like brats getting caught up in the excitement of Halloween."

Gillian Irving, a Toronto mom, has been allowing her 11-year-old son Aiden to trick or treat with his friends since he was 9. But she's also one of the few moms she knows who lets her children (Aiden and his younger sister) walk the five blocks home from school. On Halloween night, her neighbourhood is teeming with families. She knows every third kid who arrives at her door. "Of course, I want them to be safe, but I spend a lot of time training them and then I kind of let them go," she says. "In order to acquire a skill you actually have to do it." Paying attention while crossing the street is her chief worry; she thinks the stranger-danger is exaggerated.

And she's right, of course: The Halloween bogeyman is really parental worry, irrational by nature yet so hard to quell. An American study last year found no evidence that police reports of child abductions and molestations (rare at any time of the year) rise on Oct. 31. Another ongoing study that analyzed U.S. newspaper reports back to 1958, and is updated every year, found no incident when a child died or became seriously sick from poisoned candy collected by trick or treating. What's more, Transport Canada statistics also show that traffic accidents involving pedestrians don't increase on the holiday, despite more kids dashing across the street in the dark.

But the research does reveal what's being lost in the playground policing and Halloween hand-holding. The recent edition of the American Journal of Play offers the latest warning about the demise in childhood independence. An article by Peter Gray, a psychologist at Boston College, argues that it's no coincidence the decline of free play with peers has been accompanied by a rise in anxiety and depression among children and teens. Children who don't get to play beyond an adult's watchful eyes don't get firsthand lessons in compromise, compassion and problem-solving – they don't learn, among their equals, how to balance their own desires against the wishes of their friends. "There's no culture ever, as far as I know of, that has less respect for children's abilities than we do," Dr. Gray says.

Halloween, Dr. Gray suggests, is a prime opportunity for those lessons, considering that one of the characteristics of clinical anxiety is being paralyzed by your own fears. On Halloween, kids put themselves into fear-inducing situations, and conquer it: "I can walk up to this house even though there's a witch there." On their own, they have to negotiate group dynamics: what route to take, what houses to avoid, what to do if someone trips and gets hurt, how to problem solve on the fly. And they're doing all this, points out Lenore Skenazy, when dozens of families are walking the sidewalk, and the neighbours are home with their lights on – the night, she says, when we see what our communities could be like, if we just loosened up a little.

Needless to say, my son is getting his wish: Parenting, as the free-play advocates would argue, is often about saying yes, when it would be safer to say no.

Bibles for Halloween? Group hands out scriptures, not sweets
October 13, 2011 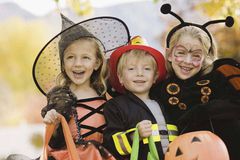 Ways to save this Halloween
October 21, 2010
Trick or treat, stress the treat: 13 ghoulishly good candy recipes
October 19, 2011
Follow Erin Anderssen on Twitter @ErinAnderssen
Report an error Editorial code of conduct
Due to technical reasons, we have temporarily removed commenting from our articles. We hope to have this fixed soon. Thank you for your patience. If you are looking to give feedback on our new site, please send it along to feedback@globeandmail.com. If you want to write a letter to the editor, please forward to letters@globeandmail.com.
Comments