Jessica Zucker was 16 weeks pregnant when she miscarried at home alone; she had to cut the umbilical cord herself before hemorrhaging. As a psychologist who specializes in women’s reproductive and maternal mental health in Los Angeles, Zucker wrote an essay last fall about her experience for the New York Times. She called on women to share their own stories under the hashtag #IHadAMiscarriage, and women around the world started saying things they hadn’t said out loud before.

With an estimated 20 per cent of pregnancies ending in loss, Zucker’s goal is to end the stigma around talking about it – that, and the “speckles of self-blame” women often feel after they suffer a miscarriage. With Zucker and others, the dialogue about pregnancy loss is slowly opening. In 2013, Ariel Levy wrote a visceral New Yorker essay about her miscarriage at 19 weeks in Mongolia, where she was on a reporting assignment. “I’m so sorry about what happened to you,” is what people told her. In July, Facebook co-founder Mark Zuckerberg announced that he and wife Priscilla Chan were expecting, but also revealed that they’d had three miscarriages along the way. “You start making plans, and then they’re gone. It’s a lonely experience,” Zuckerberg wrote in a Facebook post. “Most people don’t discuss miscarriages because you worry your problems will distance you or reflect upon you – as if you’re defective or did something to cause this. So you struggle on your own.”

Zucker wants to normalize grief in the aftermath of these experiences. To that end, she launched a line of “empathy cards” for pregnancy loss on Thursday. The cards are for women who have suffered miscarriages, stillbirths and deaths in neonatal intensive-care units, among other circumstances; there is also a card for women who get pregnant after a loss. Some cards are irreverent and slam the crappy platitudes women get, like “It wasn’t meant to be,” and “At least you know you can get pregnant.” Zucker spoke with The Globe about why we’re still so bad at this. 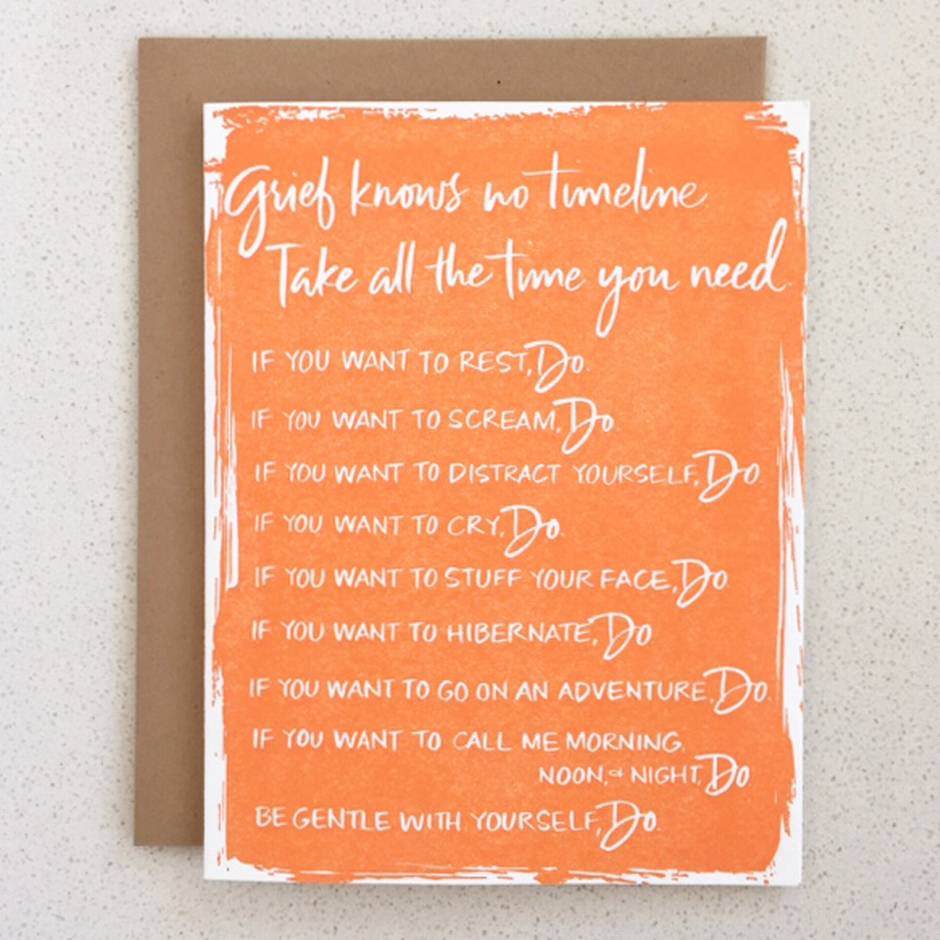 We send condolences at funerals. There are now entire sections in card stores for sympathy cards for deceased pets. Why do so many people have trouble acknowledging the tragedy of losing a baby?

In our culture it’s really challenging to deal with out-of-order losses. When a grandparent dies we know what to do. There are rites and rituals that are a mainstay in our society: Send a card, send flowers, go to the funeral, bring food. In a situation where a woman has a miscarriage, a later loss, a stillbirth or an infant loss, people are mortified and bewildered. We have a hard time sitting in uncomfortable spaces and as a result, people go quiet. Is it worse to stay quiet or say the wrong thing? Being quiet is worse, in a way. The person who says something that might sting is at least trying and they haven’t disappeared altogether.

How did people react to your own miscarriage?

Collectively what happens then is that people clam up even more. You’re in this state of grief, confusion, mourning and feeling incredibly raw and vulnerable. Your body is going through a tremendous amount of changes, having been pregnant and now not pregnant. A lot of women begin to keep things inside.

A recent survey by NPR found that a majority of women report feeling a sense of self-blame and guilt after having a miscarriage. This has to do with the silence and that’s why it’s all the more important that we get to the root of what’s going on here. I’m trying to validate the experience and obliterate the feelings of isolation. I want to melt the shame that surrounds these losses in our culture. 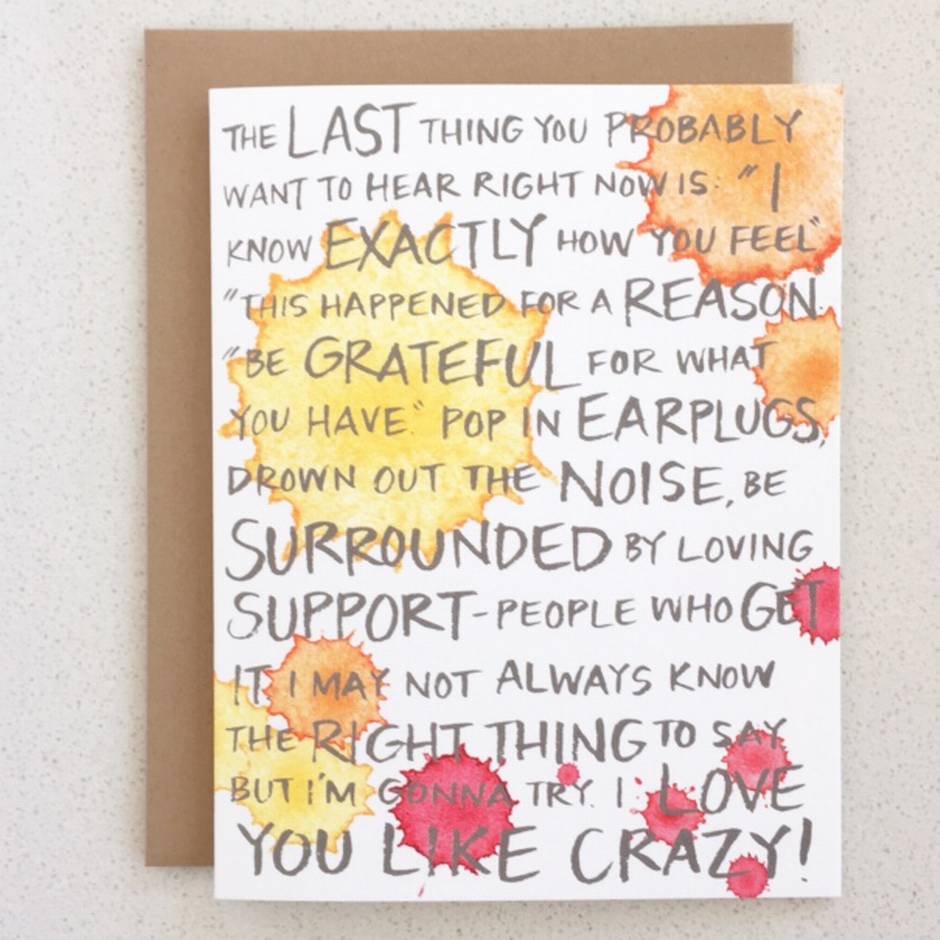 What messages do you want these empathy cards to convey?

With some of the cards I’m trying to relay a sense of consistency, like “Call me morning, noon and night,” or “I’m here for you, always.” The card that says “I’m deeply sorry for your loss” is a lot softer and can be sent by a grandmother to her granddaughter, or by a mother to her daughter. I have a card for pregnancy after pregnancy loss. The card acknowledges the terror that some women feel: Imagine being pregnant for 40 weeks, giving birth to a dead baby and then being pregnant after that? It’s hard to believe in anything after you’ve gone through something so traumatic.

I hope people want to send them to each other, or they even might want them for themselves. I could see the irreverent cards – which say it like it is in a way that the more standard card doesn’t – being stuck on a fridge, like a bumper sticker. 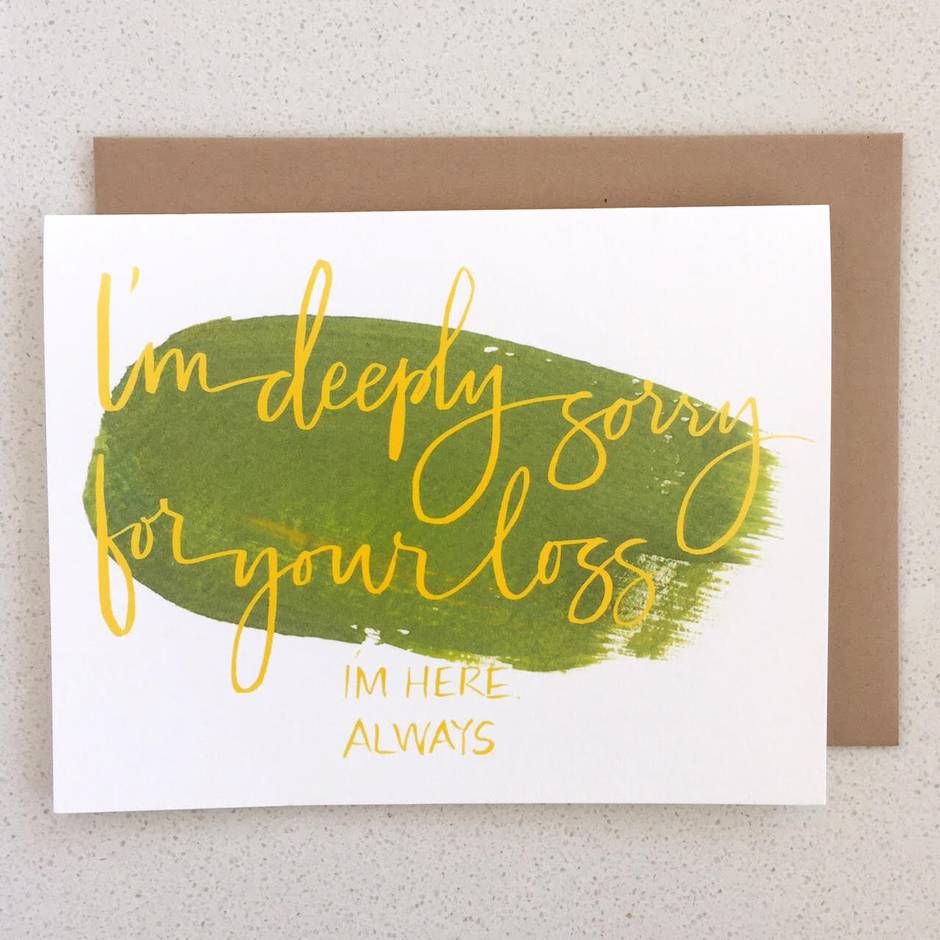 These particular cards are profanity-laced. They call people out for saying stuff like, “Everything happens for a reason.” Why do people even go there?

In our culture the focus is so much on “positive outcomes,” being happy, focusing on what’s good and moving on to the next. We don’t honour these kinds of unfortunate experiences because we’re so busy moving forward. We’re all doing our best but there’s a sense of minimization when we try to only focus on the positive. We say these things because we’re uncomfortable sitting with the unknown and we’re trying our best to make the person feel hopeful. We have to challenge ourselves and think about the other person who’s actually going through the loss, rather than thinking about ourselves or what we believe in.

How can we get collectively better at responding to the loss of a baby?

“How are you feeling?” That’s kind of simple. I would have loved it if somebody had just asked me, “How do you feel?” Then the conversation can really be authentic. 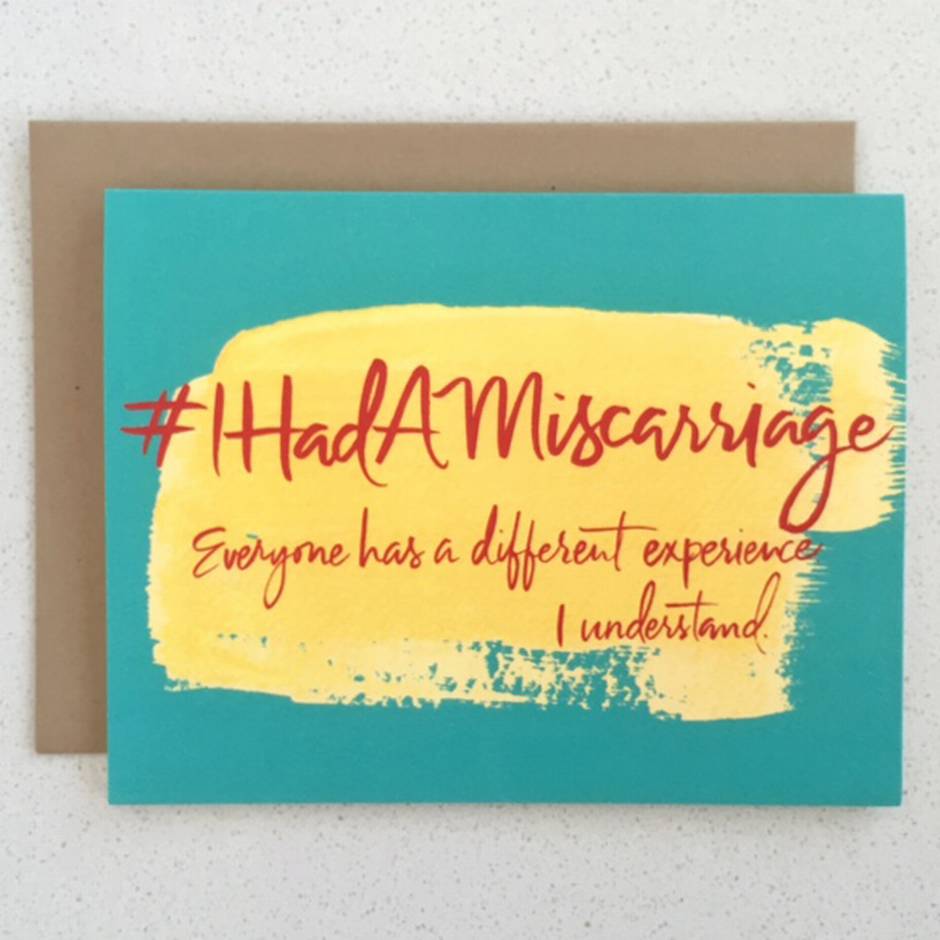 Your online #IHadAMiscarriage campaign galvanized women to come forward. But what about women who may not want to share so publicly?

It’s not that I believe every single person who has had a loss should share their story. Some women are more private and it may not help their healing – it’s a personal choice. What I was trying to illustrate with the hashtag were the share numbers, that if this goes crazy around the world we might feel more of a sense of connected community than we normally would feel. I was trying to get away from the shame, that this is not something you have to sequester inside you for the rest of your life. It’s important to normalize bad news too.