It's official: Poutine is a global player.

The world poutine-eating championships being held Saturday in Toronto - as a high-cal appetizer to a Toronto FC soccer game - are as good a sign as any that Quebec's down-home artery clogger has finally arrived on the international stage.

Okay, heavy dose of irony there. Officially sanctioned pig-outs in the presence of possibly well-lubricated footie fanatics are generally not the ticket to gastronomic fame. But poutine is different: It doesn't play by the usual rules of gourmandry. As you'd expect from a dish that's as comfortable fortifying after-hours student drinkers as it is partnering with foie gras in culinary hot spots, and that makes Canadian ex-pats breathe a nostalgic sigh from Tokyo to Dubai, poutine has range.

And even as the world's voracious speed-eaters descend on Toronto, poutine's Québécois and Canadian culinary export - notwithstanding the undeniably valid opening line of a recent 3,000-word New Yorker article, "As a punch line, poutine has a lot going for it."

French fries, cheese curds and gravy? They laugh, they check their blood pressure, but yes, they also devour with delight and even a certain fat-and-salt-induced delirium.

"It's a devilish dish," says Andrew Upton, general manager of San Francisco's Salt House restaurant, which features the formal tableside transfer of the fries and curds from silver serving dishes to the diner's plate - not quite the way they do it at Chez Ashton diners in Quebec. A short-rib gravy is served on the side, and Mr. Upton recommends a citrusy Spanish verdejo white wine "to cut through the poutine's fattiness."

In the modern gastropub culture that champions the tricky combination of earthy authenticity and understated hipster sophistication, poutine is the perfect style statement. Humble by background, innately over the top by design and endlessly adaptable, it's fully capable of going too far without seeming to try too hard.

American chefs in particular have come to admire poutine's definitive Québécois combination of exoticism and rusticity. At The Gage in Chicago, chef Dirk Flanigan offers a widely admired house poutine that incorporates elk ragout into the timeless cheese-potato blend. At the deceptively minimalist Animal in Los Angeles, Vinny Dotolo and Jon Shook prefer an oxtail gravy. At Mile End in Brooklyn, a New York tribute to the Montreal deli tradition, there's a choice between classic and smoked-meat poutine.

In Portland, Me., Duckfat restaurant serves its Belgian-style frites cooked in duck fat and topped with fresh curds and a thickened duck gravy. In Portland, Ore., there are at least a dozen locales that play to poutine cravings, including the Potato Champion, which boasts of being the city's only late-night French-fries cart and tempts homebound drinkers with vegetarian and even vegan poutine, as well as the standard version made with free-range chicken stock and artisanal curds.

How does an Oregon city come to be a force in the dish's globalization? "There's a big foodie culture here," says software engineer David Strom, author of the Portland Poutine website. "There's also an irony addiction in Portland. In the end, poutine's the perfect junk food. … You've got gravy, you've got French fries, you've got cheese - what's not to like?"

Mr. Strom traces his passion for poutine to a visit he made to Montreal in 2005: The motto of his website is "We have much to learn from Canada." Montreal's reputation as a lively tourist destination is in large part responsible for poutine's rise in the food world.

But there are a number of other factors: the sizable international student base at McGill University, the well-travelled New York/Montreal gastronomic highway, Canadians promoting their homeland cooking abroad, and the noisy celebrity status of Montreal chef Martin Picard, whose in-your-face foie gras poutine at Au Pied de Cochon successfully convinced gastronomes to rethink the boundaries between high and low food culture.

Poutine's beginnings are unpretentious. It's generally agreed that squeaky-fresh cheese curds and French fries first came together at Fernand Lachance's Cafe Ideal in the dairy-region town of Warwick, Que., in 1957. The gravy was an afterthought - Drummondville restaurateur Jean-Paul Roy took credit for that crowning touch in 1964. Since then, pretty well everything that could be slopped on poutine has been slopped - including bolognese sauce, feta cheese, canned peas and instant packaged gravy - and for decades the accidental delicacy laboured under a lowest-common-denominator reputation, particularly in its proudly self-conscious homeland.

But in the past few years, as poutine has carried the Fleur-de-lis to the world, Quebec's thinking about its often-disavowed national dish has begun to change.

At the Quebec government office in New York, poutine is very much the topic of conversation these days. Montreal is hosting a meeting of the American Cheese Society next year, and for many upscale American aficionados, the thought of Quebec cheese leads straight to poutine.

"Is it a good calling card?" asks the office's deputy director, Jonathan Becker, reflecting on the nervousness some old-school Quebeckers have felt at the mere mention of the word. "But we can't pass it up. We ought to be just as proud of poutine as we are of the rest of Quebec's culinary heritage." 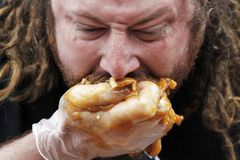