"Isn't it beautiful?" asks Peggy Baker, holding a flowing dress over her arm and then hanging it on the back of her door as she enters her office at Toronto's National Ballet School.

"Is it rust?" she wonders aloud about the rich colour. "Or maybe it's terra cotta. Salmon?" She pauses. She turns to look at me, leaning forward across her desk, a slant of late afternoon sun catching her unexpectedly in its golden warmth. It's like a spotlight on a stage, and here, front and centre, is one of Canada's most influential dancers: raw, authentic, fiercely honest.

The gown is her wedding dress. She will wear it again for a performance this coming weekend in The Neat Strange, Music of Ahmed Hassan at the Abilities Arts Festival in Toronto. Ahmed Hassan, who suffered from multiple sclerosis, died in January at 55. He and Ms. Baker were married for 21 years. The last time she wore the dress on-stage was 10 years ago when she performed Sanctum, the piece that she and her late husband debuted in 1990, the year they married. This time is far more difficult.

"It is just different to wear your wedding dress after your husband has died," she says with a soft, low exhalation. "And the metaphors [of the dance]that used to have one kind of meaning now have all sorts of little connotations floating in the air for me."

So begins an extraordinary story of love, commitment, grief and gratitude. Ms. Baker's willingness to speak about her relationship with Mr. Hassan underscores how she draws inspiration from the humanity of daily life – and death. Their relationship forced contemplation of a terrible irony: He was in a wheelchair, unable to speak at the end or move any part of his body, except his eyes; she lives in the world of movement.

And yet that strange juxtaposition yielded insight into grace, acceptance, and for her, the will to keep on dancing well past the age most dancers retire. Ms. Baker will turn 59 this week.

"He had everything to do with why and how I kept going," she says. "One of the beautiful things he would say to me every day when I was leaving home was 'Dance who you are today.' He lived his life that way. Be who you are and bring your integrity to that.

"And you think there's no reason why he should become disabled and I shouldn't. But since I still have this body, it behooves me to do something with it, to respect the gifts that I have."

Dressed in a white shirt and jeans, her greying hair long and straight, the multi-award-winning choreographer and icon of modern dance, who received the Governor-General's Performing Arts Award in 2009 for lifetime achievement in dance, is completely without artifice – no makeup, no pretension, no boundaries. Her eyes are a clear, brilliant blue, a stunning shot of colour in an otherwise pale appearance. Everything about her – her soft voice, her body, the way she moves it, her hands, large, unadorned, turning this way and that – is used as an instrument of expression.

Just as she pushes her body in dance, she allows her emotions full range, crying at one point, laughing at others, sighing as if she's in the midst of a yoga practice, attempting to release the tension of everything she feels.

"No matter what else happens in my life, I do feel I did something important and it has to do with him," she says. "In this world, we do need to act for the benefit of someone else … it was easy to say yes to that."

Mr. Hassan, an Egyptian who was born in New York, met Ms. Baker in the late 1970s when he moved to Toronto to compose music for choreographers. Their paths crossed many times as each travelled to various cities for work.

"And then I was teaching for three or four weeks in Winnipeg leading up to my first solo concert, and we just struck up this fantastic friendship," she recalls.

He had a cane.

"What happened?" Ms. Baker asked him.

"Yeah, well, the good thing is I'm an improviser," he quipped.

"I don't know if I believe in destiny but sometimes something just happens in your life and you just say, 'I know this is so right.' "

The same thing had happened with dance. The second eldest child in a family of six in Edmonton, Ms. Baker wasn't sure what to do with her life until she was introduced to modern dance at the University of Alberta. "Everyone was, like, 'Where did this come from?' And I just said, 'I can't explain but I feel that I got chosen for it somehow.' "

Still, not everyone thought her intense romance with Mr. Hassan would be good for her burgeoning career. "Friends said, 'You might not be able to dance if you decide to do this.' "

For the past six years, Mr. Hassan lived in a nursing home when it became too difficult to care for him at home. "He lost his memory. He lost everything and yet he was still this same, beautiful person."

That progression has taught her to accept her own inevitable decline as a dancer. Ms. Baker no longer does solo performances, and while she still dances with others on stage, her work is mostly choreographing for others with Peggy Baker Dance Projects.

"No matter what, it's a series of tiny deaths," she says, drawing a comparison about her late husband's illness and her decision to "go out with a whimper as opposed to a big bang. Ahmed showed me that this can be just as beautiful a way as any other."

The Neat Strange: Music of Ahmed Hassan is on Oct. 21 and 22 at 8 p.m. at Betty Oliphant Theatre in Toronto. For tickets and more information visit abilitiesartsfestival.org and peggybakerdance.com. 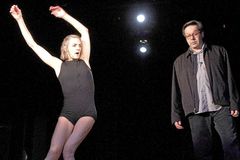 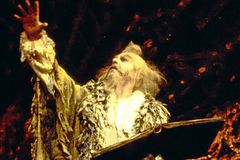