By 11 p.m., we're into insect pornography. Tick sex, in particular.

"And this is his penis," says Erica McAlister dismissively, jerking a thumb at a photograph projected behind her. She adopts the pose of a disappointed girlfriend – disbelief on face; hands on hips. "Not very impressive," she harrumphs.

The audience of almost 50 people laughs.

"I've seen my share of penises," she states authoritatively. "Hundreds of pictures of different ones," she carries on brightly. "Some of them put mammals to shame." She allows a beat. "This job has hurt my dating life, I can tell you." The thirtysomething curator (@flygirlNHM) of diptera in the department of entomology at the Natural History Museum in London shakes her head in mock dismay.

We're deep in the interior of what was called the "Palace of Nature" when it was opened in 1881 at the height of Victorian confidence. The British Empire was expanding and with it came discoveries of new plant and animal species. The Natural History Museum was an early Disneyland, where people would go to be dazzled.

But now? It feels a little Miss Havisham-y. The grand hall with its high ceiling and intricately carved terracotta columns is a stunning setting. But who wants to see dried-up insects and dusty dinosaurs? With the Internet as our collective archive and museum of the weird and wonderful, many museums have lost their place in society.

Which is why they hold adult sleepover events – or Dino Snores, as they call it – such as this.

And it's why Fly Girl is entertaining us. "And do you know how he does the deed?" McAlister continues about Mr. Tick. "He transfers sperm into his head and then he sticks his head up her genitalia. Yup. He blows it up there. And just to make sure it's up there safely, he puts two appendages up her as well." She shrugs as if to say that insects out-kink humans in sexual practices. Cultural excursions take many forms, and I was curious to know what this one would hold. Adult sleepovers in museums are in vogue. London's Natural History Museum was the first to offer the event in 2012– "due to popular demand," explains their press office, adding that the success of their children's sleepovers, which they've held since 2010, was the impetus. Already, its 2015 adult sleepovers – five in all – have waiting lists. Last summer, the American Museum of Natural History in New York held its first adults-only sleepover. It sold out in three hours.

We like to be kids again, I guess. It's so much simpler. The infantilization of adulthood is a big trend. Adult-sized onesies – the sort of cozy cotton one-piece outfits you likely wore every day when six months old – are popular. (My adult son recently wondered if I would like one for Christmas. I said, "Yes." Talk about inverting the parent/child dynamic.) And we've returned to porridge. Adult get-away summer camps are popular. Why not leave home for a night and sleep in some strange, cold place that feels like a Victorian orphanage?

The biggest surprise was that my friend and I were not the only fossils.

"It may be a case of dinosaurs sleeping with dinosaurs," I had warned her on the phone before we set off for our adventure.

"Good headline," she responded gamely. She is an erudite book editor, very British in her neat sweater, buttoned blouse, bobbed hair and glasses; a woman who tosses the word "phlegmatic" into a sentence like cucumber in a garden salad. Surely, we thought, only young bodies would be foolish enough to sleep on a marble floor. We would be issued mats. Thin mats. Army-like mats. I am astounded. Is this the legendary keep-calm-and-carry-on attitude?

I even decide not to make a fuss about the mouse. When we placed our sleeping bags and pillow in a row next to others in a small alcove, I shrieked (demurely) when I spied a small mouse scurry under one of the display cases.

"Oh, don't worry," said a young woman, who was setting up camp with her boyfriend next to us. "All these humans will scare them off."

I stiffen my upper lip like the best of them, and head off to find a stiffer drink. Most of the 200 or so people at the event looked under 50, but there were other middle-aged people, and everyone is in a convivial mood for a pyjama party in a world-famous landmark, mice be damned. Some were dressed in dinosaur onesies, sipping wine beside the massive Diplodocus, which has stood in the grand entrance hall for more than 100 years.

To keep our minds on fun, the planners have us moving from one activity to the next. After dinner, we're given a choice of the Fly Girl's lecture on insect sex – many of them have "tickling devices" in case you wondered about foreplay – or a stand-up comedy show. (Not much differencebetween the two, if you ask me.) Then there's an option of a dinosaur-drawing instruction. (Reportedly, smocks were not required for the participants.) My friend and I opted to tour the temporary Wildlife Photographer exhibition, which made us feel as though we had broken into an empty museum in the middle of the night to take in the beauty of otherworldly images in solitude – quite lovely.

At midnight, we were all back in the restaurant, sampling edible insects – sago worm larvae, caterpillars, mulled crickets and the bottoms of weaver ants. McAlister is back behind a mike. "Hugely important protein, and low cholesterol, " she announces to the skeptical audience. "We could reduce all of our greenhouse gases by going to insects for food." Apocalyptic warning about the impact of methane from cows followed.

"How are your ant bottoms?" my friend asks.

"This wouldn't happen in Russia," marvels a young Russian woman, new to London.

For those who want to regress to childhood sleepovers, there are horror movies being screened all night in an auditorium.

We decide on tortured sleep. "Good thing I brought my eye mask and ear plugs," says my friend. We return to our section in the hall, where she starts to wriggle out of her clothes.

"Of course," she says plainly. She unpacks a nightie, throws it on and unhooks her bra from underneath; slides her feet into slippers. "Aren't you?" I have a sweatshirt to change into and figure I will take off my shoes. She looks at me as though I am the oddest species in the world.

We settle into our sleeping bags, having taken a second mat each to provide a bit more cushioning.

"Nowhere in sight," my friend reassures me. She lies on her back, arms folded neatly over her chest.

"You're hilarious," I tell her.

"One of those British women who make the Empire strong?" she asks from behind her eye mask.

We laugh. But for most of the night, I lie awake. A harpist plays next to Dippy, the dinosaur. I imagine mice, watching from the sidelines as we take over their palace. I look up at the carvings and at the ceiling panels way above us. Hand-painted and gilded, they show plant species introduced to the country in the age of exploration and empire: cocoa, tobacco, rhododendron, cotton. I think of Charles Darwin, a statue of whom presides over the scene from the top of a grand marble staircase.

This is a poignant museum now, not of exciting things we want to see, but of a lost era in which there was great optimism and wonder about the promise of the planet. And maybe that's why it's still worth visiting – next time, on my feet only. 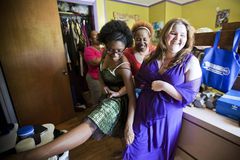 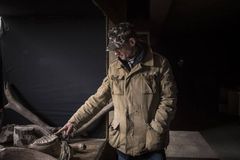