Relationship status: Together since 2004

Kayt: I got a job working as hair stylist on a cruise ship. It was basically my first time away from home. The first time I ever saw a cruise ship was when I was getting on board. He was the chef. I remember he had this presence in the tall white hat.

Stefan: For our first date, I took her on an after-hours tour of the ship in a lot of places staff don’t generally go. I knew she played piano so I took her into the formal dining room and she played.

Kayt: It was so romantic, like something out of Titanic. I had resisted at first, but after that date, I was smitten.

Stefan: It was funny because relationships on the ship don’t tend to be long-term.

Kayt: If you date more than three weeks you’re considered an “old couple.” That was us.

Kayt: Two years later, we were living in Hong Kong for his job. It was wild. Lots of great food, lots of partying, popping bottles of Moët. We were definitely living “the life," but I think we both started to feel like it was all a little shallow.

Stefan: I remember the first time Kayt asked me to go to church. It was Easter. I definitely wasn’t interested in religion at the time, but she was persistent.

Kayt: He said, “Okay, if I don’t have to buy you a stupid chocolate bunny, I’ll go.” And then we kept going back. Four months later, we had come to faith together.

Stefan: I think for both of us, there had been a lot of reservations around marriage. We have nine divorces between our parents. Nine! Our faith gave us a way to imagine a different kind of commitment.

Kayt: When we got married our vows included the verse from Ecclesiastes – a cord of three strands not easily broken. That’s engraved on the inside of our wedding bands.

Kayt: We always knew we wanted to have a family. We moved back to Canada and had our two daughters Asia and Savannah. Life was just great, but there was the adoption question which was something we had discussed on and off over the years.

Stefan: I decided to quit my job as a chef because the hours were just too intense. We started a raw-dog-food business so that we could both be at home with our kids. And then it was like, okay, are we going to do this?

Kayt: For us, faith is not just about going to church on Sundays, it’s about having purpose. Adopting Grace and Leo [from Sierra Leone] was an extension of that.

Stefan: We went through a huge struggle in terms of the adoption process. The paperwork took forever and then there was an Ebola outbreak, which was a whole different drama.

Kayt: Adoption has not been easy. Life right now is challenging and rewarding and confusing and exciting. We’re in the trenches, but our marriage is strong. I think I might keep him. Match: How one SWF looking for a BFF found a happy marriage instead 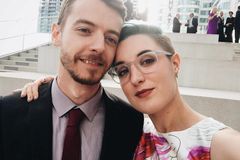 Match: A cultural connection leads to love and marriage 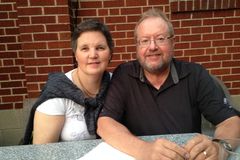