Relationship status: Together just over a year, engaged since Christmas

Eric: We met on a dating app called Raya in December 2019. I was only on the site for two days before I became a match with Natasha.

Natasha: I’d never been on a dating app before, and I was on for one day when I was matched with Eric.

Eric: We had our first long-distance Facetime date, from Southern California [my home] to Toronto, on Dec. 29. Two days later, we spent New Year’s Eve on the phone, just chatting and talking through our lives, getting to know each other.

Natasha: A big word for me in 2020 was “depth” and I wanted to surround myself with people who had it. We were aligned in so many ways that we dove deep right away.

Eric: A few weeks later, we spent three amazing days in New York City. Quiet time just the two of us. I remember when I left, the driver taking me to the airport said, “Hey man, would you like me to turn around and take you back?”

Natasha: I went to California to visit him twice after that and then he came to Toronto in February. That is when the borders closed.

Eric: I had arrived with a knapsack, some jeans and a few T-shirts. I didn’t leave for four months. In April, my mom died unexpectedly of a brain aneurysm. Because of COVID, I couldn’t go to the hospital to be with her, or be there in person to support my dad.

Natasha: I felt so sad for him. It was heartbreaking. We’d only been together four months, so we didn’t know each other that well. I just tried to follow his lead and pay attention to what he needed from me.

Eric: When you experience a very close family tragedy with someone else, it’s very telling. I felt loved and supported by Natasha.

Natasha: I’m not sure if our relationship would have moved with the same speed and intensity without COVID. Suddenly we were living together full-time and we had to figure how to navigate this together. We found out we have very similar temperaments and tons of shared interests.

Natsha: For people who are extroverts, the pandemic is a very difficult time. I’m an introvert who happens to live an extrovert’s lifestyle because of my career. In some ways COVID has been a gift – and I don’t say that to offend – I just mean it in the sense that, for me, it’s been a calming time, without so many distractions. It is the distractions that complicate a relationship.

Eric: We lived in different countries, we were going to have to commute to see each other, and in normal times, there would have been a lot of complicating factors.

Natasha: It was nice to learn about each other while under the same roof where you get to see the “real” person not the person you might imagine them to be. When you’re back and forth between two cities, it doesn’t seem real.

Eric: On Christmas morning I asked Natasha to marry me. We got engaged in California. I’d been sitting on an engagement ring trying to decide if it would be Christmas, or Natasha’s birthday or Valentine’s. But it was a beautiful, quiet peaceful day and it felt right.

Match: A decade apart helped this couple know they were meant to be together
Subscriber content
January 7, 2021 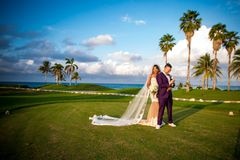 Match: From a high school crush to a cross-country move
December 4, 2020 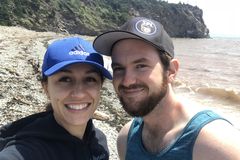 Match: Time spent apart only strengthened Amy and Oliver’s decision to be together
Subscriber content
November 14, 2020 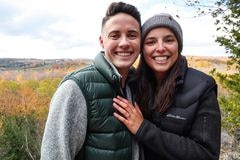