In a gold lamé dress, Dr. Ruth Westheimer wove through the giddy television audience, doling out rapid-fire sex advice in a thick German accent. A man piped up, asking what to do about a “frigid” female partner.

“Woo! Hold it! That word, you can’t say on my program,” Westheimer yelled, waving her arms. Patiently, she explained there’s no such thing as frigidity, only a culture that doesn’t encourage women to take the lead with their own sexual pleasure.

The grainy footage is captured in Ask Dr. Ruth, director Ryan White’s illuminating time capsule of a documentary (out May 17) charting Westheimer’s rise as a celebrity sex therapist throughout the eighties. While the decade brings to mind heady excess, it remained a dark age for sex ed and women’s sexuality especially. Westheimer, a four-foot-seven German-Jewish refugee, helped change that in North America.

In 1980, her trailblazing radio show, Sexually Speaking, had trepidatious callers inquiring about everything from sex toys to crossdressing. By 1984, Westheimer brought her infectious, giggly-granny candour to television. She became a fixture on the late-night circuit, scandalizing Johnny Carson, David Letterman and Arsenio Hall, whom she forced to say the word “clitoris.” At the time, it was provocative stuff: during a 1985 university lecture, a male audience member tried to place Westheimer under citizen’s arrest for her explicit talk.

Three decades later, the 90-year-old sex therapist dubbed “Grandma Freud” remains blunt as ever about women and men in bed.

"She can’t tell him anymore that he’s a bad lover because he doesn’t know how to give her an orgasm,” Westheimer said in a phone interview with The Globe and Mail from her apartment in New York’s Washington Heights in April. She was talking about female pleasure, a favourite subject: “She has to talk about it – and then she has to show him.”

For all the controversy it elicited in the eighties, in 2019, Westheimer’s advice often comes off as out of touch (“old-fashioned” is how the nonagenarian frequently, and proudly, describes herself). She’s not a fan of open relationships, one-night stands or casual sex, preferring monogamy. She traces the steep rise in sexually transmitted diseases to “more free love” today.

But it’s Westheimer’s musings on sexual assault that landed her back in the spotlight recently. Speaking to NPR in 2015 and later doubling down on Twitter, Westheimer cautioned young women not to get into bed with men naked if they don’t plan on having full-on intercourse, warning that it’s as risky as crossing traffic on a red light. Online, critics responded that women who change their minds during intimacy probably have very good, intuitive reasons when they want to back out, and shouldn’t be victim-blamed. Despite the criticism, the sex therapist has not budged on her stance.

“I don’t want people to be in bed naked because the sexual desire is a very strong one, especially for men,” she told The Globe. Asked whether her warning paints all men as brutes incapable of taking “no” for an answer, Westheimer said, “That’s nonsense talk. That’s the #MeToo talk.”

‘Boring and normal’: The new frontier of polyamorous parenting

On #MeToo, Westheimer echoed common, critical refrains around the global movement. She said she is worried about #MeToo, arguing that the situation has grown “extreme” and would prove “detrimental” to relations between women and men – men paralyzed in a politically correct world where they can’t even compliment a woman on her dress anymore. It’s an oft-repeated concern that feminist critics say minimizes the serious issues of sexual assault, workplace harassment and gender inequality.

“I know I sound old-fashioned," Westheimer told The Globe. "It’s okay, I’m almost 91. I can afford to be old-fashioned.”

Today, the next generation of sex educators is split on Westheimer. While experts acknowledge that she ushered in a new kind of public conversation about sex in North America, her conservative takes on #MeToo and modern dating realities have left some questioning her mantle as a maverick.

“I want to push back on this idea that she was this great innovator and now she’s out of touch. Her message has always been this, but the bar has moved," said Canadian sex educator Cory Silverberg, who co-authored the 2015 book Sex Is a Funny Word with Fiona Smyth. He took issue with Westheimer’s “old-fashioned” defence, noting that many older women stand behind #MeToo. "The way her opinions are aging … has nothing to do with her age,” he said.

Even as shifting cultural conversations have slowly inched out a woman once at the forefront of sex ed, Silverberg and others argued that Westheimer’s more contentious viewpoints need not negate her entire legacy. Toronto sex educator Carlyle Jansen lauded the sex therapist for modelling a non-judgmental attitude toward the people who approached her, be it virgins, women who never climaxed or husbands threatened by their wives’ vibrators.

“Her form of education draws people in and makes them want to learn, as opposed to banging them over the head," said Jansen, who in 1997 founded Good For Her, a Toronto sexuality resource and workshop centre. “I see her as a pioneer who didn’t shy away from anything."

Jansen pointed to Westheimer’s support for the LGBTQ community at the height of the AIDS crisis, when religious protesters called for a quarantine of gay men. The sex therapist “stuck her neck out” for those suffering with the disease, when there was little incentive to do so in the mainstream, according to Jansen.

Speaking in the documentary, Westheimer explained this sensitivity likely stemmed from years spent living as an outcast herself: Her Orthodox Jewish parents were killed in the Holocaust and she was orphaned at the age of 10 in Switzerland. She eventually moved to the United States, earning her doctoral degree in education at Columbia University. After a stint training family planners in East Harlem with Planned Parenthood, she worked as a postdoctoral researcher for the Austrian-American sex therapist Helen Singer Kaplan.

She married three times and lived as a single mother in the 1950s, when it was virtually unheard of. Her last, late husband, engineer Manfred Westheimer, championed her successes, taking care of their two children Miriam and Joel when she worked. The famed sex therapist never gave her kids “the talk,” although she did leave enlightening books lying around the family home. (She would churn out 40 sex ed books of her own, with titles including The Art of Arousal; Dr. Ruth’s Guide to College Life; Dr. Ruth’s Guide to Talking About Herpes, as well as the Sex for Dummies books.)

The film sees Westheimer’s daughter, Miriam Westheimer, and granddaughter Leora Einleger grilling her on another of her blind spots: the way she bristles at the word “feminist.” It’s curious, given that Ruth Westheimer’s track record on equal rights, equal pay and abortion, as well as her own experiences as a single mother pursuing her career all suggest she’s very much a feminist. But here again, the concept feels too radical for Westheimer, who said she pictures 1960s bra burners every time she hears the word. “It’s a label that doesn’t fit right with me,” Westheimer told The Globe. “I have to be true to what I think because that’s my whole career.”

Retirement is not on Grandma Freud’s agenda. This summer, a re-issue of Sex For Dummies will include new chapters from the sex therapist on modern day loneliness and the lost art of conversation; like everyone else, Westheimer is worried about screens replacing human contact. In June, she’ll join the Oxford Union Society to debate whether pornography has a place in sex education (she recommends it as a relationship aid, as long as couples learn to be “realistic” about what they see on the screen). 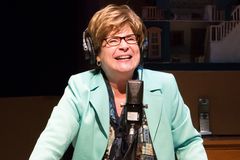 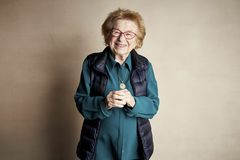