I am an atheist and have religious friends, whom I'd like to keep as friends. Invariably, I get hints from them, some subtle, some overt, that they don't like my atheism and want to convert me to whatever belief they have. It could be to invite me to a church supper, which I don't want to attend, and frankly, places of worship give me the creeps. If I ever ask the simplest question about someone's religion, they bristle and become defensive. I feel I have to "hide" my non-belief from them, because they automatically think that everyone has a religion. Also, I don't want to be confrontational and lose my friend. Yet I see friends only invite their religious friends to events, and constantly leave me out.

I know how you feel, except on the other side of the coin.

I am, as far as I know, the only person I know who believes in God. All my friends seem to automatically assume that everyone is, like them, an atheist, and believe (my wife most vehemently) it's "lights out" when you die.

Not me, baby! I see God's hand in everything. I walk outside and if it's a beautiful day: "Nice work! You're very talented. Of course, You don't need me to tell You that."

But I've realized something. Two weeks ago I wrote a column about how you should speak up about your political beliefs, even if everyone around you disagrees. And it's occurred to me I'm quite quiet about my religious beliefs.

Why? Because in my milieu, people equate believing in God with being a little thick, a little slow, I think. I wear a little cross around my neck and if it pops out of my shirt people are all like: "Please tell me that's just an affectation, Dave."

I've even had it suggested in a roundabout way that expressing my beliefs amounts to bad parenting.

Example: When my oldest son was about 12, he went to Bible camp with his best friend. He came back indoctrinated to the eyeteeth: wore a cross, prayed every night and spoke about how he talked to "the Lord" and so forth.

I liked it! I felt like it would help him navigate the moral morass of his teen years, and so it has, I believe.

But one night a friend of ours came over for dinner. Like many these days, her religion is, basically, the environment. If we'd sent our kid to Recycling and Composting Camp, she would have understood. But as it was … Her (incredulous, like it was the worst parenting decision ever): "You let your kid go to Bible camp?"

Me: "Hey, it's not like I sent him to Moonie camp. It's not some crazy cult. It's Christianity. Part of the Judeo-Christian tradition? It's been around a while, hello?"

You believe it's "lights out" when you die? Speak up about it, loud and proud. It's 2015, not 1520, thank God. You will not be declared a heretic or burned at the stake or stretched on the rack for your beliefs.

Nor should you be ostracized by those around you. It's cute – by which I mean totally relatable and understandable – that you want to be invited to things you don't want to go to.

I get that, 100 per cent. There have been numerous occasions in my life where I wasn't invited to something I didn't want to go to, but felt kind of hurt I wasn't asked to join in. It's very human. It also leaves you in a perfect position, I think. Speak up for your beliefs or lack thereof! Try to convince your friends there is no God, and let them try to convince you there is one! If you would like some ammunition for your side, look up either Stephen Fry or Christopher Hitchens on God. Both are absolutely devastating to those of us who believe.

An interviewer asked Fry: "Say you got to the Pearly Gates and confronted God. What would you say to Him?" Fry: "Bone cancer in children? What's that about? How dare You? How dare You create a world in which there is such misery that is not our fault … Yes, the world is very splendid, but it also has in it insects whose whole life cycle is to burrow into the eyes of children to make them blind …Why? Why did You do that?"

[Editor's Note: The Globe and Mail and the Munk Debates in 2010 featured Hitchens debating former Britiish Prime Minister Tony Blair on the question: Is religion a force for good or evil?]

Now, I'm not saying you need to debate – and for the record, I would never debate anyone about the existence of God. I would lose. It's something you either feel or do not feel. I feel it. That's really all I can say.

But as I said two weeks ago about politics, it's important to stand up for what you believe in. Same goes for religion. If they don't invite you to their "church suppers" or whatever, then they're not really good friends, and what have you lost? You didn't really want to go anyway.

You do that, I promise I will do the same. On the other side of the coin. 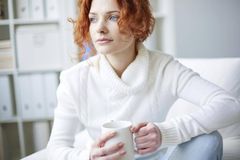 My atheist friends are snubbing my baby's baptism
May 15, 2018 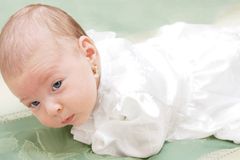 Facts & Arguments
My friend's dying tested my atheism
May 1, 2018 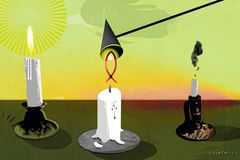