The bride wore blue rain boots, her bridesmaids mischievous grins. Wine glasses and tallboy cans in hand, they stomped through the bride’s backyard to the creek where they soiled their gowns in mud, mugging for the photographer. Off-camera, the girls chucked all their finery into a bonfire: a right pagan affair.

The bride, 24-year-old Cynthia Joanne, had signed her divorce papers earlier that day. The Guelph, Ont., administrative assistant decided to celebrate coming through it alive with a “trash the dress” party, women only allowed.

“It didn’t come from a place of bitterness. There was no throwing darts at pictures of my ex,” said Joanne, now 27. Infidelity spelled the end to her three-year marriage. “The party celebrated all the people who helped me through that.”

For women splitting in their 20s after failed “starter marriages,” divorce parties are proving a soothing balm. Many of these blowouts mirror that other big day, the gowns hauled out, tiered cakes ordered, photographers hired, registries put forth – divorce registries, ostensibly for after you lose half your stuff. Like other twentysomethings getting over heartache, these young brides have turned to public ritual, be it elaborate “freedom fests” shared on Pinterest or an evocative post-divorce tattoo (birdcages flung open are a big theme here).

These young divorcées are also poised as a new and lucrative commercial demographic: Not only are many open to marrying again, they’re marking their separations with a whole new array of baubles. Websites like TrashTheDressOnline.com reveal a whole new world: divorce cocktail dresses, symbolic divorce rings, plus tips for redecorating the house after the ex is gone – think pink “divorcette pads.” Divorce-party planners offer their services online, helping pick out divorce-party music and favours. Chintzy online divorce-party suppliers shill “divorced diva” balloons, black veils and somewhat disturbing penis pinatas. Not cathartic enough? Why not splurge on a miniature mahogany coffin for your wedding band, complete with caustic engraving of your choice? “What better way to bury that ultimate symbol of a dead marriage?” asks Weddingringcoffin.com founder Jill Testa, who divorced after 20 years and received hearty applause when Whoopi Goldberg featured her little caskets on television’s The View. No longer a source of deep shame, divorce is now also a marketable life event, the final stage in the wedding industrial complex. 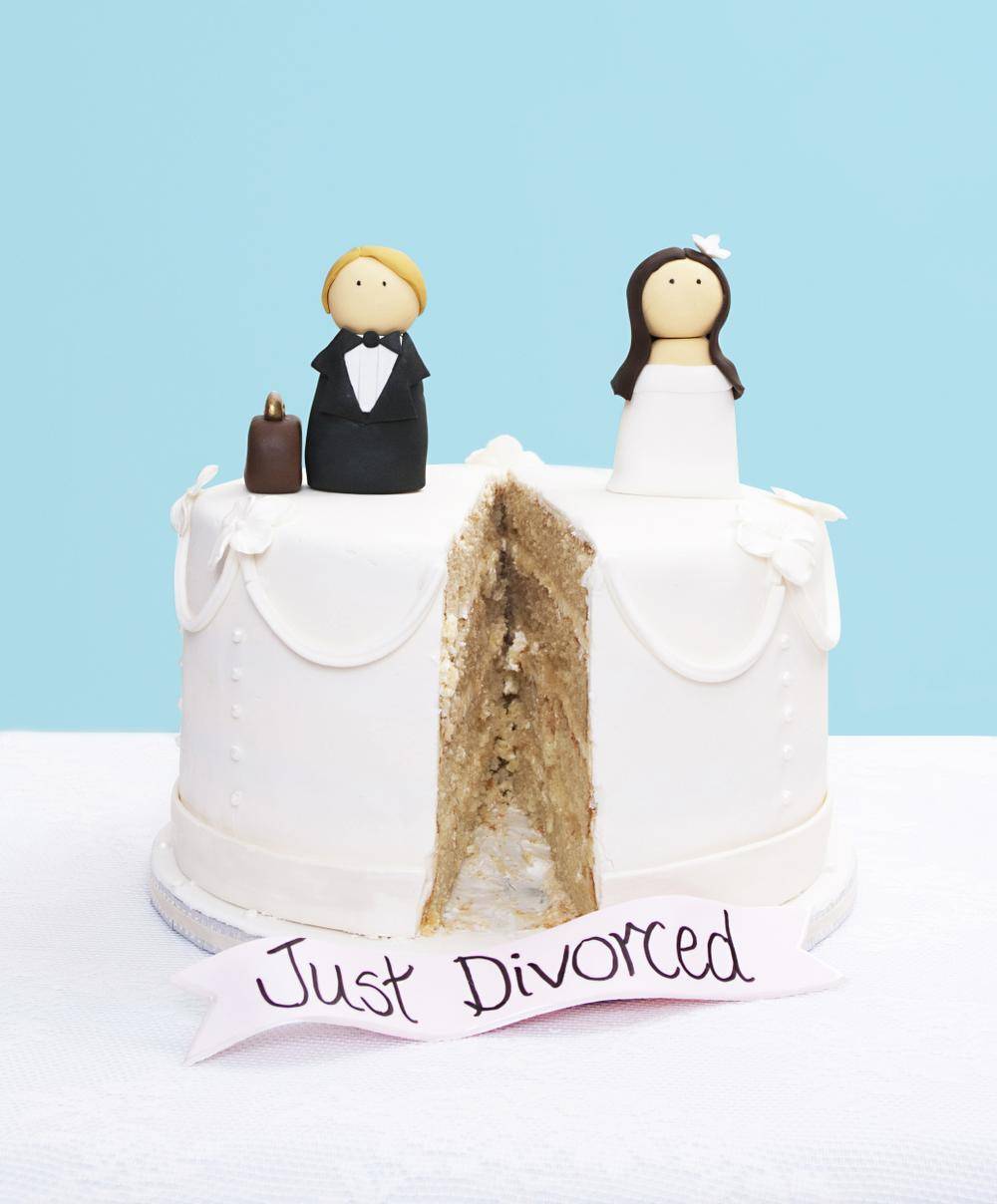 A divorce cake from How to Throw the Ultimate Divorce Party, by Eileen Velthuis. Cake by Jennifer Stafford Events. (Andrea Gurniak Photography)

“It’s a new divorce revolution we’re starting,” says Joelle Caputa, 33-year-old founder of Trash the Dress, which also has offshoots in a Pinterest account, “online support group” and the forthcoming book Trash the Dress: Stories of Celebrating Divorce in Your 20s.

Caputa divorced at 29 after a 14-month marriage; her husband didn’t want to have kids, a deal-breaker for her. She said that unlike previous generations that stressed compromise, toiling for years to save doomed marriages,

“This is a group of girls who are strong enough to know they need to get out of a bad situation and turn a really bad experience into something positive.” (Or as Cynthia Joanne puts it, “Maybe we’re just being more confident in ourselves, being our own cheerleaders. We’re listening more to what’s good for us.”)

So who inks up her body or ignites her wedding dress post-split? Caputa, who took a pair of scissors to hers, says many of the women posting on her website experience traumatic marital dissolutions involving addiction, infidelity and domestic abuse.

The occasional divorcée arrives frustrated by an ex’s lack of ambition and video-game habits, but generally speaking, the women who slice and dice their gowns aren’t coming from amicable separations.

More generally, Caputa argues that parties, tattoos and support groups can help because divorcing young carries a particular sting of failure. Friends often can’t relate because they’re freshly married themselves; older family members who hoped for grandchildren may harbour disappointment, especially if they footed the wedding bill and their daughters are now moving back home. “You feel like you’re the only person that age getting divorced,” says Caputa. “It’s very embarrassing.”

Moving from failure to independence was the guiding spirit for Chandra Poirier, who posed on Calgary’s Peace Bridge during her trash-the-dress photo shoot. The Edmonton claims adjuster divorced at 27 after two years of marriage; she decided to use the shoot as an outlet. “I cut the wedding dress short and painted the crap out of it,” said Poirier, who then shoved the gown into a garbage bag in the trunk of her car, later chucking it into a campfire. “It’s not taking up room in my life any more. It’s burned to a crisp,” said Poirier, now 30.

Poirier also got a tattoo near her hip, the words “Have courage” in Sanskrit. Divorce tattoos like hers are mushrooming on Pinterest and Reddit as jilted wives and husbands get inked. 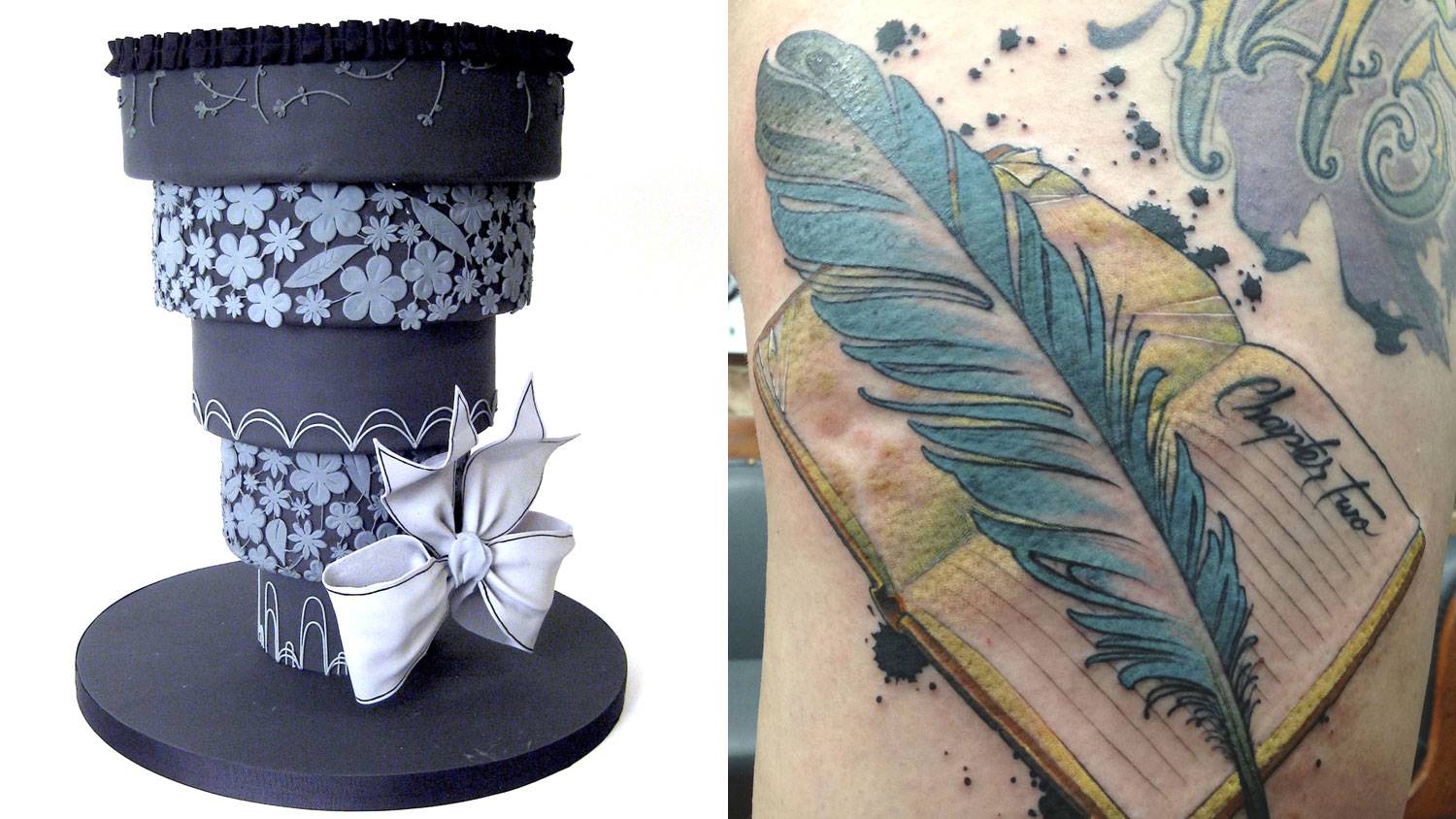 Eileen Velthuis, the Port Coquitlam, B.C.-based author of How to Throw the Ultimate Divorce Party, explains that divorce rituals are “about celebrating the future and looking forward.” Not divorced herself, Velthuis has thrown several of these celebrations for friends. She prefers themed parties – think paintball guns – but advises leaving the children with a sitter and soon-to-be-ex-in-laws off the list. Also reconsider friends who are Instagram-happy; the photos could get back to the ex. “There’s no etiquette yet about being invited to a divorce party and being required to bring a gift,” says Velthuis, who does wholeheartedly support divorce registries.

Divorce registries? This is the line at which critics of the divorce party balk: Is it about catharsis or another indulgent, exhibitionist “life event?” While proponents tout “empowerment,” is it just another financial drain on guests, another cash grab for a burgeoning party-favour industry?

“Is every life event a huge celebration? If you haven’t let the dust settle, what are you learning from?” wonders Deborah Moskovitch, a Toronto divorce coach and author of The Smart Divorce.

While she’s all for drinks with friends after divorce papers are finalized, Moskovitch isn’t sold on the showy divorce rituals, particularly if a split was acrimonious: “Some of [the women] are living very much in the moment. How will they feel in their 30s looking back?” said Moskovitch. “The emotions are ramped up. Afterward, it’s like post-hangover, especially if you’re spending a lot of money on this.”

An early forerunner of the trend was model Shanna Moakler, who didn’t help the reputation of divorce parties as bitter, man-hating saturnalias. Moakler celebrated her 2006 divorce from Blink 182 drummer Travis Barker with a party in Las Vegas; the highlight was her pink tiered cake, a tiny groom crumpled in a pool of blood at its base. Google-image search “divorce cakes” and you’ll find a violent gender war playing out in cake toppers and icing: miniature grooms rendered homeless by gold-digging exes, teeny brides brandishing machine guns, more grooms hauled out with the trash, decapitated or stuffed into a wood chipper.

Today, we hear whispers of celebrity divorce bashes after more publicized splits: Demi Moore, Katie Holmes and, most recently, Gwyneth Paltrow. In the real world, most divorce parties are helmed by women and attended by a small group of female confidants. The exceptions are parties hosted by both partners after a friendlier split; these are mostly intended to reassure mutual friends. White Stripes front man Jack White and model-turned-musician Karen Elson were the notable example, in 2011 hosting a “positive swing bang hum dinger” to celebrate the “making and breaking of the sacred union of marriage.” (The party vibes didn’t last and the two have since become embroiled in a heated custody battle, complete with restraining order.)

Divorce parties are ultimately as individual as the marriages themselves. Not every young woman wants a Shanna Moakler-type klatch and some opt for more personalized rituals. For Toronto social-media manager Jennifer Wilson, that involved a nondescript star tattooed on her rib cage. Her grandfather was a ship captain; the tattoo was about “finding direction” after divorcing at 25. To Wilson the tattoo was less “Eat, Pray, Love” than some of the divorce tats she’d viewed online. Wilson, now 28, also decided to run a half-marathon, mostly to get out of the house.

“It’s like coming back to the world – back to my hobbies and interests,” said Wilson. “It’s about claiming your decision. It shows that you’re moving on so other people should too.”