Kanye West recently revealed that he spent his honeymoon editing his wedding photograph until it was just right. Since posting the pic of him and his new bride Kim Kardashian on Instagram, the photo has garnered more than two million “likes.” It’s not just celebrities obsessing over wedding photos.

Many photographers now have clients who come to them with shot lists, which never happened even just a few years ago. Wedding photos are now so popular online that many brides-to-be create Pinterest pages to track them for their own big day in the hopes of recreating their favourites.

“Last year we had a bride who printed out her whole Pinterest board and gave it to us,” says Tony Lombardo, co-founder of Toronto-based Little Blue Lemon Photography.

The vast majority of couples want their weddings shot in a photojournalistic style, says Igor Pavlov, head of the Professional Wedding Photographers of Canada, an Ottawa-based trade association. “They want natural moments,” he says.

Such moments, however, need to reflect a couple’s individuality, especially as people invest more time, money and energy in their weddings, O’Brien says. “They want someone who can capture the essence of the day and who they are as a couple,” she says.

The shot of everyone in the wedding party lined up outside the church may still be a staple, but there are whole new genres of wedding photography, many of them producing images that have gone viral. 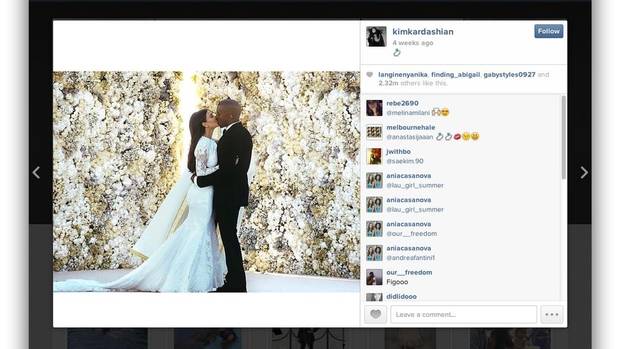 Our Love Is Magic

Most couples want at least one shot that captures the depth of their feelings. For anyone who isn’t that couple, this a type of photograph that easily spills over into cheesy excess. Frequently, couples are shot backlit. Sometimes, there are sparklers twirling around them. Sometimes, there is stuff floating around in the air, like pixie dust. A lot of times, the bride is leaning back in repose while her husband leans in, staring at her intently. Or, in the case of Kanye West and Kim Kardashian, they are kissing passionately in front of a wall of flowers. Kim and Kanye’s pic may not be the most creative photograph, but that’s not what matters, says Toronto-based wedding photographer Sandy Tam. “Maybe that was the moment he remembers most about his wedding. It may not have been captured in a way that is unique, but maybe that moment to him is important,” she says. 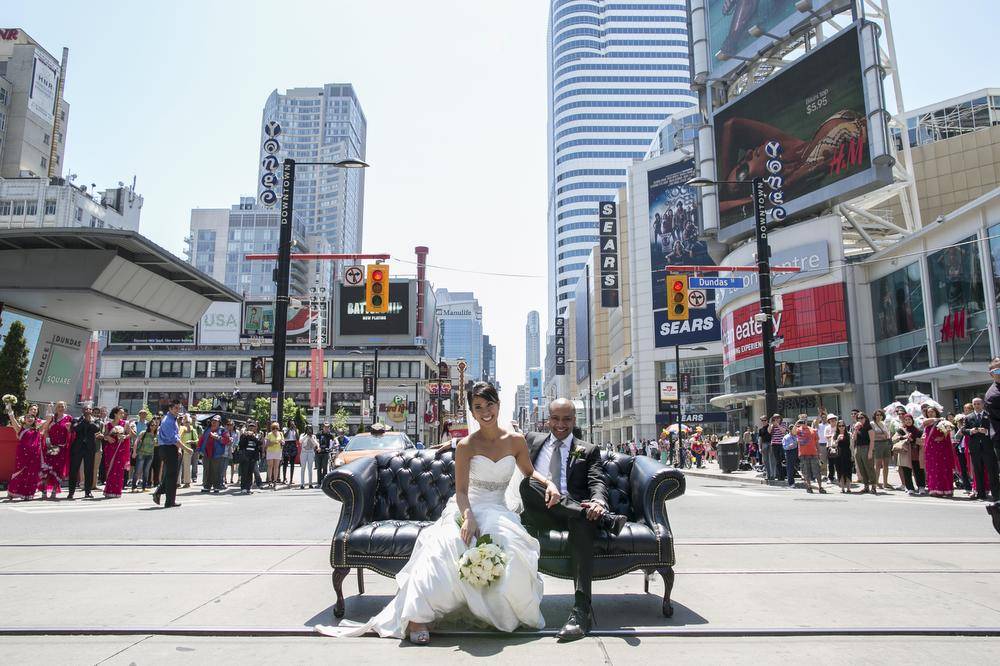 Thinking outside the box these days often means thinking outside the church grounds. When Shiran and Julie Isaacksz got married in 2012, they rented a couch and traversed the city with a photographer, including this stop at Yonge-Dundas Square, one of the busiest intersections in Toronto. “I think it reflects us as a couple and our friends,” Shiran says. “We’re a pretty diverse group of individuals, and a lot of us live downtown and love being part of downtown.” The couple lives and works downtown; he’s a senior director at the University Health Network, while she’s a teacher. They also took pictures at a graffiti wall near their church and several other locations. “We did the church shot, too, for my parents,” Shiran says. 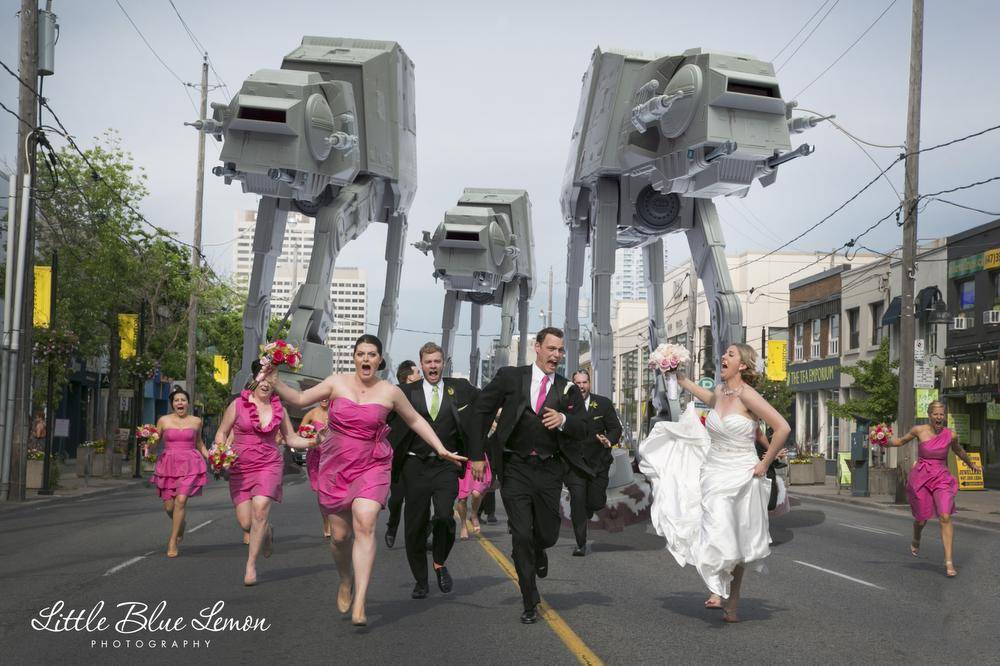 Fandemonium often doesn’t stop when it’s time to put on a wedding gown. “We often say to people, ‘We want to know who you guys are so in 10 to 15 years you’re still looking at these photos saying, ‘Oh my God, that’s so us!’” says Lombardo of Little Blue Lemon Photography. And he knew his friend Leslie Seiler is a massive Star Wars fan. “I dominate most people in Star Wars trivia,” Seiler says. So when Lombardo came to them with the idea of running down a busy Toronto street and then Photoshopping in AT-AT Walkers, Seiler and her husband, Paul Kingston, and their wedding party were all for it. “We all looked at each other, like, ‘Why wouldn’t we do that?’” Kingston says. 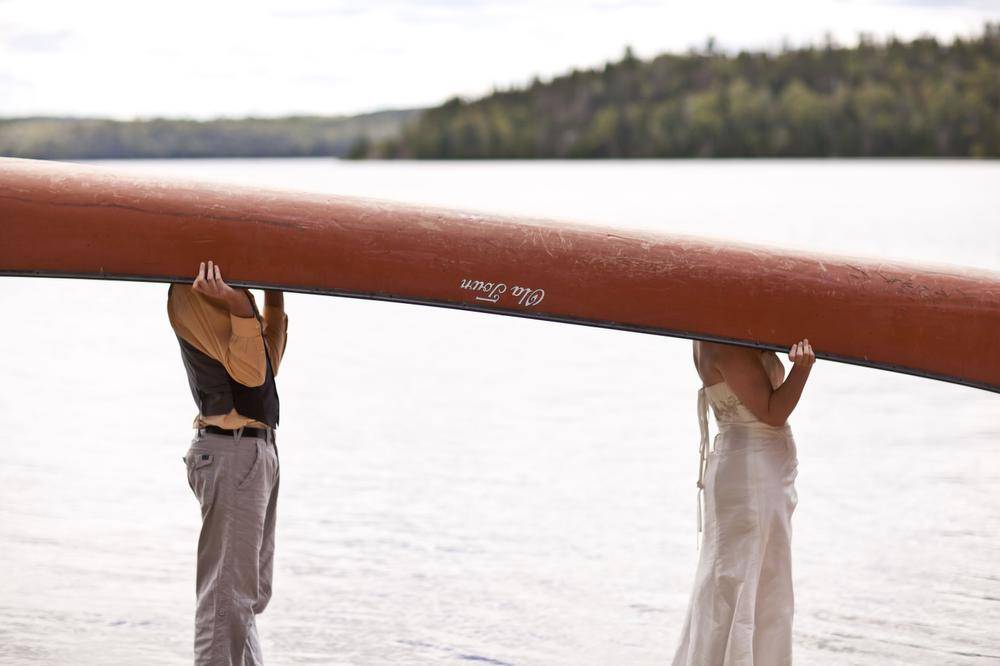 We’re Not Taking This Too Seriously

Weddings are supposed to be a fun day. “People want to show that,” says wedding photographer Mike Kalimin. There are still many people who want what’s traditional, but, he says, “More and more people are eager to do something different.” Often, couples want to show not only their sense of humour, but also the fact that they haven’t bought in to the stuffy conventions of getting hitched. See, for instance, memes that work their way through the Internet of a groom and his buddies mock-flipping out over his ring. Another great example is this shot Kalimin took of a couple who got married in Ontario’s Algonquin Park last summer. When it comes to more and more wedding photography, “Lighthearted seems to be the feel,” Kalimin says.