With the generation that led the gay-rights movement reaching retirement age, many LGBT seniors are forced to relive the struggle for acceptance, and even re-closet, as they enter care facilities populated with a generation raised to believe that homosexuality is a crime. Wency Leung reports 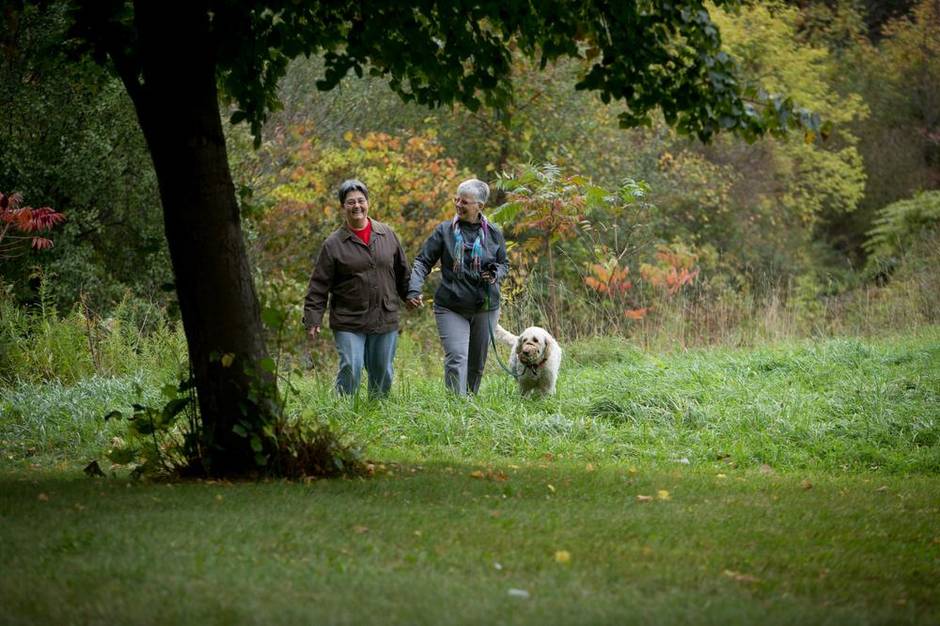 Ginny Lundgren, left, and Paulette Kupnicki, take a walk outside their Windsor condo with Zooki. The long-time couple had to come out all over again when they moved to a retirement condo a couple years ago, to often unenthusiastic neighbours. (Photos by Glenn Lowson for The Globe and Mail)

When Paulette Kupnicki and long-time partner Ginny Lundgren moved into a Windsor, Ont., condo for retirees two years ago, Kupnicki wanted to get to know her new neighbours. She put up flyers on the building’s bulletin board, advertising a seniors’ games group and an upcoming play about LGBT (lesbian, gay, bisexual, transgender) issues, in which she was involved.

The games group flyer was left in place, but her notice about the play was anonymously taken down. Its removal set Kupnicki’s heart pounding: The thought that some residents did not welcome same-sex couples filled her with dread.

“I just spent a lot of money to move out of my house into this place,” says Kupnicki, now 70. “Honestly, I’m walking around with a lump in my throat, thinking, ‘What the hell am I going to do?’”

Stories like Kupnicki’s are all too common. The generation that led the gay liberation movement now faces the prospect of moving into retirement communities, nursing homes, and long-term care facilities alongside more elderly occupants who were raised with the notion that homosexuality was a disease, and a criminal act.

Stories of seniors having to relive their struggle for acceptance are rife. Fearing discrimination from service providers and their peers, some even retreat to the closet when they seek health and social assistance, hiding their sexual orientations, gender identities and domestic relationships. That can be emotionally draining, and have serious consequences on their mental and physical health.

“The number-one fear we hear over and over [from LGBT seniors] is having to age out of their homes, move into care and potentially re-closet,” says Dana Parker, executive director of the Vancouver advocacy group Qmunity. She notes that middle-aged and younger LGBT individuals rarely give that future prospect a thought.

The issues around integration and acceptance have kickstarted campaigns to raise awareness and tolerance in senior-care facilities, and to educate staff members trying to welcome their first wave of uncloseted LGBT residents.

And as the number of openly LGBT individuals swells among the senior population, the need for sensitivity and inclusivity in elder care becomes more pressing. According to a discussion paper released last month by Qmunity, the number of open LGBT individuals aged 65 and older is believed to be about 6.7 per cent of the overall senior population. In the B.C. Lower Mainland alone, that translates to roughly 25,000 people.

It’s a figure that’s expected to grow to reflect a shift in demographics that will see seniors make up an estimated 19 per cent of the province’s population by 2020, up from 15 per cent today. If attitudes don’t change, Parker says, LGBT seniors will be vulnerable to loneliness, isolation and at risk of not receiving the care they need.

Deep-seated fears of discrimination are hard to shake among those who spent much of their adult lives in a world that treated homosexuality as a crime or a disease. The Qmunity paper points out that those who are 85 years old now were already 40 when homosexuality was decriminalized in 1969, and 66 at the time sexual orientation became protected under the Charter of Rights and Freedoms in 1995.

These older seniors, who may have had relationships and careers ruined because of their sexual orientation or gender identity, aren’t likely to live openly in elder care, particularly if they are housed with peers who still hold onto their prejudices. It has fallen on less reticent LGBT boomers, who spent their youth championing gay rights and are now greying themselves, to advocate on behalf of their elders and to push for change in senior care. 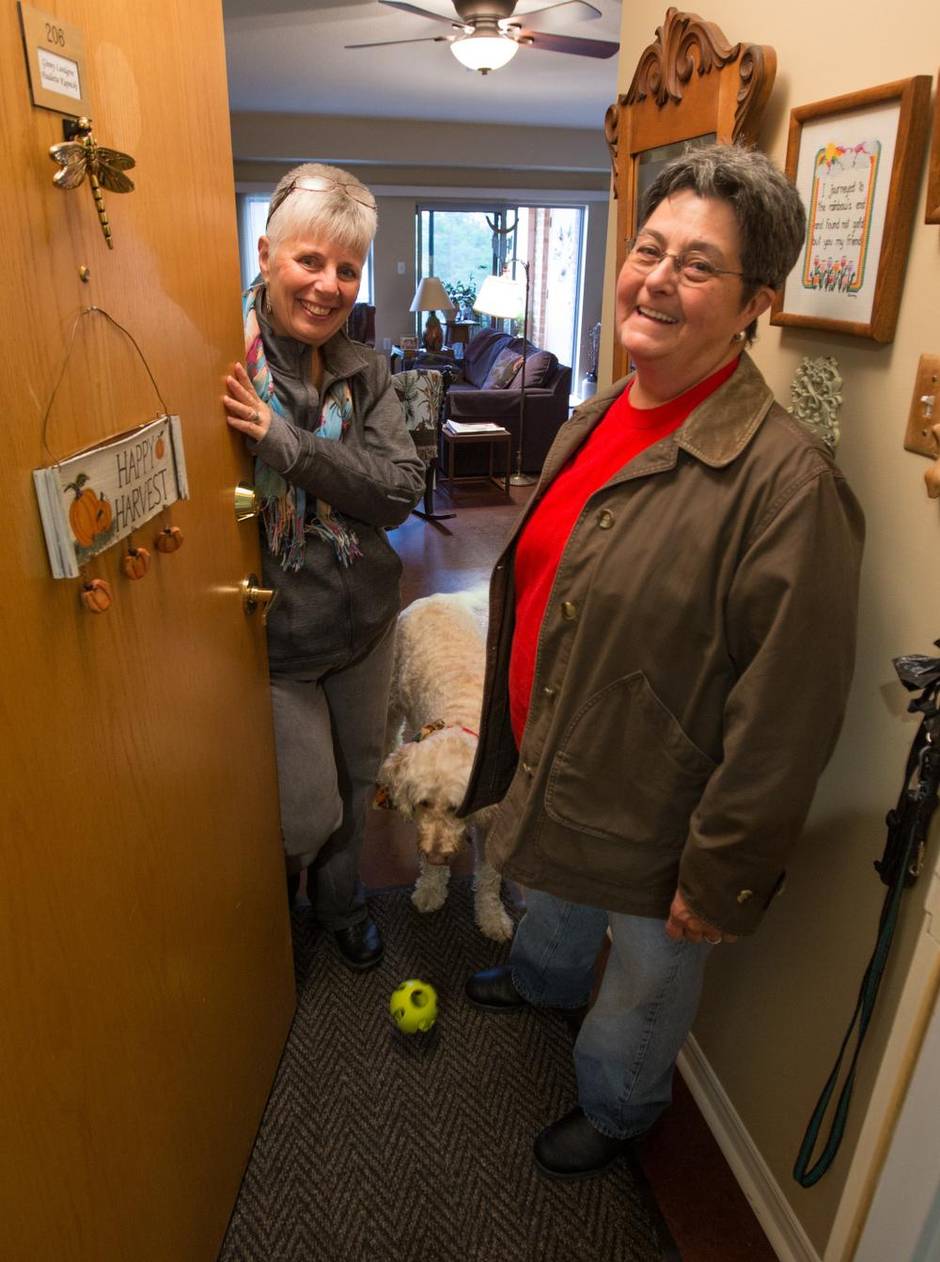 “I’m an activist, so I’ve never been in the closet,” says Marie Robertson, community developer of the Ottawa Senior Pride Network, which provides diversity training to long-term-care workers, volunteers and clients of senior services. Now in her 60s, she recalls marching in the streets for human rights protections when she was 19, and she continues to defend those rights. “When I do training,” she says, “I’ll say to the staff: ‘This is who we are. We’re not going back into the closet when we go into care. So here, you’d better get ready.’”

Much of the sensitivity training around LGBT seniors involves creating a safe environment in care homes by building empathy, ensuring staff and volunteers understand historic hardships LGBT individuals experienced, and making sure the language used on intake forms and in brochures is inclusive. Through her work, Robertson has heard heartbreaking accounts of the fear and humiliation LGBT seniors face in long-term care, such as the gay couple who had to visit the washroom just to hold hands, or the transgender woman whose care-worker made a scene upon discovering she had a penis.

Social exclusion is only one of the fears seniors have of being outed. “They’re afraid if the staff knows that they’re gay, that diapers aren’t going to be changed as fast, the call bell is not going to be answered,” Robertson explains. “And the reality is that those fears are justified. That’s what happens.”

Shoshana Pellman, 68, of Toronto, became comfortable enough to be openly transgender in 2005. Although she lives independently now, the idea of returning to the closet if she needs senior care in the future is unthinkable. “It’s like, which part of my body am I going to basically amputate? What part do I have to get rid of to meet your needs or your demands?” Pellman asks. “If someone is forced back in the closet, they’re denying who they are. They’re losing a part of who they are. That’s so cruel… Basically, they’re just surviving. You’re not living any more.”

Research points to positive mental health and wellness benefits linked to coming out in supportive settings, with subjects showing lower rates of depression, burnout and anxiety, and lower levels of the stress hormone cortisol. However, being openly LGBT may have the opposite effects in environments that are not supportive, says Robert-Paul Juster, a PhD candidate at McGill University’s Integrated Program in Neuroscience.

Concealment, on the other hand, has emotional and cognitive costs, says Richard Ryan, professor of psychology at the University of Rochester in New York state. “For example, to conceal, one must constantly monitor oneself, which is draining and requires a cognitive load. Concealing also has emotional costs associated with lower self-esteem, more depression and other negative states,” Ryan said in an e-mail.

Juster points out that much research in this area, including his own, has focused on LGBT youth, but he says there is growing interest in examining the mental health of LGBT seniors. “There is this feeling that they’re an under-represented portion of the population that people don’t know very much about,” he says.

Aware of the need to address a growing wave of openly LGBT seniors, some care facilities are proactively reaching out to advocacy groups for help, says Steven Little, education and training manager at The 519 Church Street Community Centre in Toronto. Although they’re willing to make changes, most seniors’ homes don’t know where to start, he says, noting that mental health resources for LGBT seniors are scarce. And for the first time, service providers may be grappling with how to care for aging clients who have HIV/AIDS. 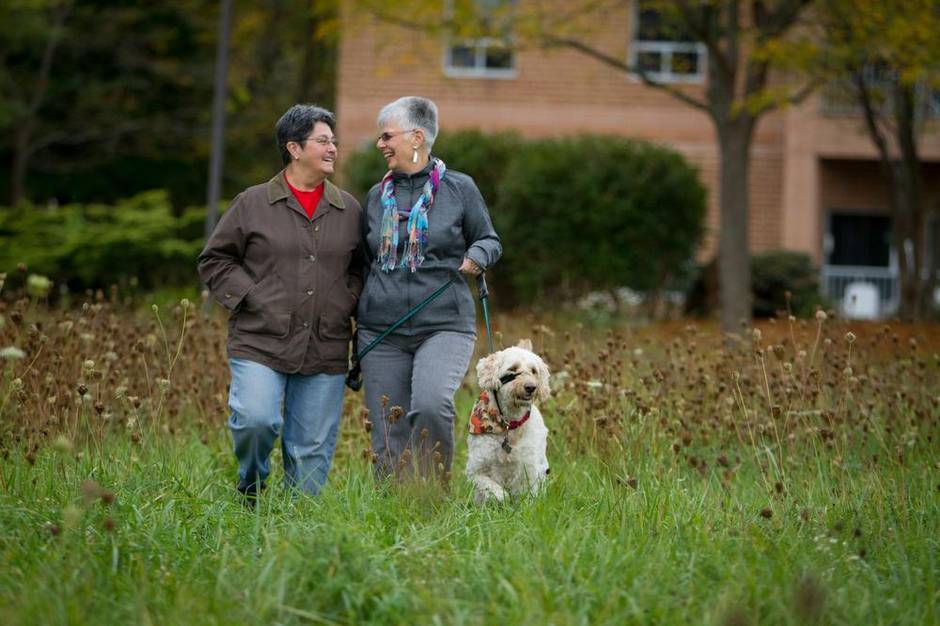 When it comes to welcoming LGBT seniors, Toronto’s city-run long-term-care homes have taken a lead. At True Davidson Acres, for example, administrator Carlos Herrera says staff and volunteers hold a variety of LGBT-friendly programs, such as shows starring a local drag performer, and movie nights featuring films such as Brokeback Mountain. They participate with residents in the city’s annual pride parade, are careful to use the proper pronouns to address transgender residents, and they’ve made sure a rainbow flag and pink triangle, symbols of LGBT rights, are visible at the entrance to the home, signalling to visitors and residents that it is a supportive environment.

The results of such efforts can be life-changing. At True Davidson Acres’s sister home, Fudger House, resident Alf Roberts, 85, finally felt comfortable enough to be openly gay for the first time in his life after moving into the home five years ago. At last, he says, he can be himself. “I hope that, eventually, more long-term-care homes will be more open so that people don’t have to worry about coming into a place like this,” he says

Back in Windsor, Kupnicki eventually summoned the nerve to address the issue of her missing flyer during a building meeting by pre-emptively thanking her neighbours for welcoming her and Lundgren, and inviting them to join her group activities. Although she made a few new friends that day, some people refused to even look at her.

Kupnicki, who is involved in a 50+ Proud group that provides diversity training on senior care, says it’s difficult to have to come out of the closet all over again. “At times, you think to yourself, I don’t think I can do this one more time,” she says, noting it’s more challenging for people to disclose their sexual orientation when in ill health.

Kupnicki, who had a Catholic upbringing, knew she was attracted to both males and females when she was in grade school, but she quickly hid her attraction to women when her parents discovered she had been kissing a girl. She did not open up about it until entering a relationship with Lundgren 32 years ago, after leaving her husband. Even so, for years Kupnicki was careful about disclosing the relationship, referring to Lundgren as her “friend” in public for fear of losing custody of her children. The process of coming out was also fraught with struggles with disapproving family members.

Kupnicki and Lundgren married eight years ago, and though they now live happily in their retirement condo, having warmed up to even those who initially gave Kupnicki the cold shoulder, the memories stay with them.

“As I talk about them, it comes back and reminds me how painful some of that stuff was,” she says, noting each senior brings his or her own struggles when accessing services or entering care. “Even if you’re out and you’ve been out a long time and all the rest of it, those experiences sit in the back of you.”