If you think your inbox is jammed now, give it a few years. According to a recent study by the Radicati Group, a California-based tech research firm, the number of e-mails sent each day will grow to 206 billion by 2017 from 191 billion in 2014. Most of those will be missives from your boss and co-workers. Which means, on all those 3 a.m. wake-ups when you check the time on your smartphone and can't resist checking your e-mail, it will only be work cutting in to your sleep.

E-mail is vintage tech, a holdover from the dial-up days. Remember that Nora Ephron movie where the Meg Ryan character's computer chirped "you've got mail!" and she clicked it open to find love letters from a secret admirer who turned out to be a guy played by Tom Hanks? If that's what was really going on in our inboxes, e-mail would be as joyful as a handwritten letter and not the burden it has become. No matter how quickly we deal with them, e-mails pile up like digital dirty socks, demanding 24-7 attention, tethering us to our jobs and stacking up like never-ending (often pointless) to-do lists.

E-mail is not just a work hassle, but a health hazard. New research suggests the stress of dealing with over-stuffed inboxes shortens our breath, speeds up our hearts and spikes our blood pressure – often without us noticing. The nightly wake-up calls disrupt our sleep, which cuts into our daytime productivity. The long-term impact of e-mail-induced anxiety is hard to isolate in research. but job stress has been linked to chronic health issues such as heart disease and diabetes.

Last year, a British study that tracked a group of government workers found that 83 per cent became more stressed using e-mail – a number that grew to 92 per cent when they spoke on the phone and checked e-mail simultaneously.

Researchers measured stress levels using heart-rate and blood-pressure monitors, as well as saliva samples, and found that stress levels peaked at the time of day when employees' inboxes were most full.

E-mail differs from other forms of digital communication because it arrives unbidden, at all times of the day, "pulling" receivers out of their current tasks. With Twitter and Facebook, even with the social pressure to participate, we are the ones doing the "pushing."

A 2011 study in the journal Organization Science tracked the work habits of 72 employees at an engineering company: 60 per cent of participants said they handled e-mail at home, evenings and weekends; most of the rest said they had stopped because the habit was causing conflict at home. The study concluded that the more time participants spent on e-mail, the more overloaded they reported feeling. E-mail, the study's authors pointed out, was "the only medium [participants] blamed for the stress they felt."

According to research by Dr. Thomas Jackson of Loughborough University in England, an e-mail message, on average, takes up 90 seconds of your time. Based on a new one arriving every five minutes, an employee would be interrupted 96 times in a normal workday, and spend the equivalent of two and half hours a day just processing e-mail. "There is a lot of damage being done," says workplace consultant Nathan Zeldes, co-founder of the Information Overload Research Group. "The worst damage is to creativity and your ability to think – your mental acuity. Being interrupted and stressed all the time dumbs you down, you make worse decisions, and you are literally less innovative. It's a big problem."

Those constant interruptions were the reason why executives at Klick Health, a Toronto-based digital marketing company, ditched internal e-mail. "E-mail is the ultimate tool to let other people prioritize your day for you," says CEO Leerom Segal. Employees still communicate with clients via e-mail, but the company now uses a program that prevents requests from going to more than one person, requires more details and a clear timeline. Now, Segal says, mass e-mails can't be sent out, creating stress and confusion.

Reducing e-mail is a moving target for a number of companies. An Israeli startup banned e-mail jokes. Data firm Nielsen greyed out the reply-all button so that people couldn't use it. The German knife company Henkel declared a holiday amnesty on e-mail.

As Zeldes points out, it's not necessarily the e-mail that's stress-inducing – it could be the workplace culture and expectations that accompany it. For instance, if quick replies are the norm, then sending a message that's followed by silence can be particularly frustrating.

Heidi Hanna, a workplace wellness consultant and author, points to the chronic misuse of the "out-of-office message." She recalls getting an automated message from a man on his honeymoon. "It basically said, 'I can't afford divorce counselling at this early stage in our marriage, so I will not be checking.' It was brilliant because it was communicated with humour, and good for him for taking care of himself. I kept my fingers crossed that he wouldn't reply." But, of course, he did.

New software is also making it easier for people to manage their e-mail. Klick's Segal uses a program that prevents group e-mails from going to smartphone, so he can handle them in bulk from his computer without being interrupted during the day. As part of her research at Microsoft, Mary Czerwinski, manager of the visualization and interaction research group, is designing computer systems would schedule interruptions, such as e-mail, during "cognitive breaks," such as when a user hits "save as" on a file.

But for the most part, says Zeldes, people are reluctant to give up e-mail. "Everyone would benefit if everybody sent less e-mail, but nobody wants to be the first to cut back. So they sit there at 2 a.m. sending totally unnecessary e-mails."

Let's face it, we can relate to the lovestruck Meg Ryan character, dashing to her computer – we're just as addicted to the potential surprise of a good-news message, a gem in the spam. Researchers suggest that e-mails have a "variable interval reinforcement schedule" similar to slot machines. "You pull in a batch of e-mail, and you keep hoping that maybe in the next one will be a message that is intimate, or personal, or exciting," says Zeldes. "If people stopped for one moment to think about it, they would realize there are better ways to find happiness."

Check your work e-mail in batches rather than whenever they pop up. Stop checking after a certain time in the evening. Put your smartphone in airplane mode at night so you won't be tempted by incoming message alerts. Choose one day a week for an "e-mail Sabbath."

Nathan Zeldes, co-founder of the Information Overload Research Group, recommends using abbreviations in subject headings that indicate that a message is urgent (HOT), or response not required (RNR). Even better, only use the subject heading, if your point can be kept short, followed by EOM for end of message.

After setting automated out-of-office messages before holidays, do not keep responding to work-related e-mail. Heidi Hanna, a corporate wellness consultant, says that if vacationers set firm e-mail boundaries, colleagues will come to accept them.

When desperately overwhelmed, delete all old e-mails and start over, says Zeldes. If they have been there for months, chances are their purpose has passed – and the sight of that empty inbox is an instant stress-reliever. 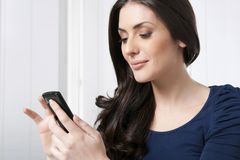 How obsessed are you with your smartphone? This video will make you feel really bad about it
August 23, 2013