Elizabeth Gilbert is in her "Skybrarie," the magical, handcrafted work space among her beloved books, which she built on the top floor of her 1869 house in a small New Jersey town.

She is happy, writing, like "a mad woman in the attic." She starts each day at 5 a.m., keeping farmer's hours, as she works on her new novel, a rich 500-page work of historical fiction, The Signature of All Things. On her desk is a pair of Victorian walking boots, which her neighbour found in her attic. The boots are her talismanic call to another era. Down a rabbit hole of her imagination she goes by climbing up the narrow stairs to her library in the sky. On the risers of those stairs, step by step, leading up to a door, are the words of a poetic fragment from 19th-century recluse Emily Dickinson: "The soul selects her own society then shuts the door."

I tell you this about her, in the manner of an omniscient narrator, because that is how Gilbert speaks about herself – at a remove, as though she is looking back on her recent past and seeing the meaning of its arc, why it happened that way and what lessons she can glean from the experience. She is wearing a casual dress with one of those draped, wrap-around sweaters when she arrives in a downtown Toronto hotel to promote her novel, which will be released in early October. Her blond hair is neatly blown-out. She approaches like a friend you didn't know you had. Everything about her is nice; as calming as the herbal tea she orders and then sips, lifting the china cup to her lips and then placing it back down on the saucer with a delicate clink; a meditative little ritual.

If the success of her 2006 global bestseller, Eat Pray Love, which sold more than 10 million copies and was later made into a movie starring Julia Roberts, was part of that arc, then so too was Committed, the non-fiction book that followed it, which described her decision to get remarried to the man she had met in Indonesia at the end of her divorce memoir. That book was not fluid. It felt as fraught as her decision. Critics panned it. She was in emotional turmoil. (Let's just say it wasn't all dreamy and romantic. The decision was brought on out of necessity – a bureaucratic matter to allow her partner to remain in the United States.)

Now, though, she speaks of both with an equanimity, not boasting about one and dismissing the other. There's a sense of serene detachment about her, a Buddhist sensibility that allows her to see both books, one hugely successful, the other less so, as just part of her story, steps to the future she now inhabits, nothing more.

"It was an internal mathematical equation that I had to figure out how to solve, and that was, how to write a book after Eat Pray Love, how not to get psyched out," she says. "I don't think there could have been anything I could have written after Eat Pray Love that would have been relaxing, but I was stubborn about it. Because I knew that if I didn't write another book, I would never write another book.

"Committed was the poor thing that had to go into the world, but something had to, and it served a lot of purposes. It helped me sort out things I needed to sort out about marriage and relationships. It answered questions for the dear fans of Eat Pray Love about what happened to these two people next. It gave my haters and critics something to rip apart so they could get it out of their systems."

She smiles, then sips.

The longer, wider view is where her mind seems to naturally go. At 44, she has perspective on her writing life. "In my 20s, [writing] was a tool of creative ambition for me. I wanted to be a literary person and I tried hard to be one [with a short-story collection, Pilgrims, and an award-winning novel, Stern Men]. And in my 30s, I used writing to work out some shit that I had to go through in my personal life. And now that I am a middle-aged woman, I want to use it to expand."

A mesmerizing, gentle omniscience is at work in The Signature of All Things, too. Alma Whittaker, a botanist and scientist, comes into the world at the start of the 1800s in the century when everything people knew about science, religion, commerce and class would be questioned. We read of her enterprising father, Henry Whittaker, who makes a great fortune in the South American quinine trade; of her desire to understand the world, scientifically but also philosophically and emotionally; her disappointing marriage; her courage. It is an ambitious novel, spanning years and countries.

It is both lyrical and fast-paced, if that's possible, and the writing reads as though she has enjoyed creating it, up there in her Skybrarie, secretly like bread from an old family recipe. "This novel is a celebration of what Eat Pray Love brought me – financial autonomy, creative autonomy, personal contentment. I never had all those things in my life all at once. It was a very fertile moment." She describes the joys of invention as she might a landscape she adores and had neglected to visit. She felt giddy when she inserted a character from her imagination into a scene with someone real from history. She loved the process of puzzling out the plot, taking three years to craft a 70-page outline so the writing was "like paint by numbers." She wanted the story to show a "powerful woman whose life is enriched by intellect and not necessarily broken or saved by a man."

And yes, in case you're wondering, there are ruminations about the nature of intimacy and marital expectations in The Signature of All Things. But here's what you might think about as you read this glorious sweep of a novel. Every night, when Gilbert came down those narrow stairs from her attic to the kitchen, where her husband was making dinner, he would ask how the writing had gone. And over a glass of wine, in a chair, she would read to him what she had finished that day. And somewhere in her mind, this is what our heroine of divorce memoirs was coming to realize. "Artistic torment is a really romantic idea, but it's not very conducive to output," she says. "If I am not inventing dramas in my personal life, I can invent them on the page."

Eat Pray Dish: Our panelists give their take
August 14, 2010
How a bitter divorce made author Elizabeth Gilbert a better wife
March 7, 2010 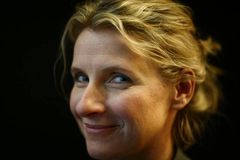 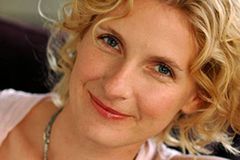 She ate, she prayed, she loved, she wrote about it
March 19, 2007
Follow Sarah Hampson on Twitter @Hampsonwrites
Report an error Editorial code of conduct
Due to technical reasons, we have temporarily removed commenting from our articles. We hope to have this fixed soon. Thank you for your patience. If you are looking to give feedback on our new site, please send it along to feedback@globeandmail.com. If you want to write a letter to the editor, please forward to letters@globeandmail.com.
Comments