About 30 of us croaked in unison as we roared through Halifax on the Harbour Hopper, a bus that turned amphibious in the ocean, but not until a tour guide urged us to wave our fists and yell repeatedly at landmarks along the way. "Ribbit-ribbit!"

The locals were surprisingly tolerant of this harassment, but as I scanned the motley crew on board, I couldn't help wondering, "Who are these people?"

The short answer: blood relatives of mine. But I hadn't seen many of them for 25 years, and the meet-and-greet over pizza the night before could hardly cement the neglected bonds.

'Tis the season of the family reunion. In these dire economic times, the choice to visit distant relatives isn't obvious. Getting together with far-flung nuclear families can be hard enough. And it's tempting to assume that one's precious travel funds and vacation days would be better spent hiking in Hawaii or drinking beer in Mexico.

It took me months to commit to last summer's reunion, and I was the only one of my mother's four children to go. It wasn't that I disliked the clan, stalwart Maritimers that they are. Rather, I didn't really feel I knew them.

Unlike most of my mother's family, I grew up in Ontario and Quebec. Each summer we drove back east to the lovely towns our ancestors had settled in the 1750s, but later my trips to Nova Scotia dwindled as studies and work drew me to Cleveland, Montreal and, finally, Vancouver.

I formed surrogate families wherever I went - intimate circles of friends with whom I celebrated Thanksgiving and shared adventures in dating and marriage.

Few members of my mother's family acknowledged the milestones in my life, nor did I send greetings for theirs. In fact, I rarely knew about them.

Had we been a Facebook family, things might have been different. In the social networking era, families exchange photos and bulletins far more often than they could ever phone or write, says Richard Smith, a professor of communication at Simon Fraser University.

"Because you keep up online, you actually might feel more of a connection with these people than you would otherwise," he says, adding that electronic communication often drives face-to-face visits.

On the other hand, ignorance about one's kin may be bliss, judging from a new survey.

Four out of five people have attended a "miserable" family reunion, according to a poll by VitalSmarts, a corporate training consultancy founded by the authors of the New York Times bestseller Crucial Conversations. More than half of the poll's 700 respondents said reunions are spoiled by grumpy relatives and family conflicts.

That wasn't the case at my gathering, though one relative did show signs of "foot-in-mouth" disease. As I nursed my seven-month-old baby, the first thing she said to me was, "Oh, I didn't think you'd be able to breastfeed." (She was referring to my small frame.)

Luckily, I had no expectations of an instant connection with my relatives. Instead, I hoped to gain a sense of continuity between generations past and future, largely for my new son.

In our increasingly fragmented society, "people really want to know who they are," says Ione Vargus, founder of the Family Reunion Institute at Temple University in Philadelphia. Genealogy is the third-most popular hobby in the United States, she points out.

Major influences on our behaviour and assumptions about the world have been handed down through generations, says Geoff MacDonald, an associate professor of psychology at the University of Toronto.

"In Western culture we kind of fool ourselves into thinking we're more independent from our families than we really are."

Clearly, my relatives and I were good at fooling ourselves. We lived as far apart as Florida, Vancouver, Worcester, Mass., and the Cayman Islands, and weren't even Facebook friends.

But on the second day of the reunion, my kinfolk and I began to open up after copious amounts of wine, beer and fragrant curried chicken made the rounds in my parents' eclectic home.

Young second-cousins (once removed) played with the baby. My stepfather told jokes by candlelight in the backyard. And I got to know my three American cousins.

The only one I remembered was the eldest, Cherie, who had fascinated me at age 11 with her flavoured lip gloss and menthol cigarettes, which she smoked to the tune of the Eric Clapton hit, Cocaine.

Despite their financial success, her family was warm and unpretentious - the kind of people you'd want as neighbours. So were my Nova Scotian cousins.

The opportunity to recognize shared values and traits is among the benefits of a family reunion, Dr. Vargus says. Over the past 40 years, as more and more families have been separated by geography, plenty have struggled to regain a sense of belonging and identity, she adds. "It's a powerful instinct."

As the reunion progressed, I wished we'd had one sooner.

The gathering reached its emotional apex when my mother, a respected Canadian artist, presented each member of my generation with a painting from her studio.

"Over the years," she said, "I have not gone to your weddings. I have not sent presents for Christmas or the births of your children. But I want you to know that I have always thought of you."

Her words revealed an unspoken assumption in my family: lack of contact doesn't mean lack of caring.

The next day, there was talk of pooling together photos and following up by e-mail, but no one volunteered for the job.

Months later, I received word that cousin Cherie was suffering from a mysterious illness. While she was in the hospital, I wished her well in my thoughts, but I never found the time to call or write. After all, what would I say? We had only exchanged a few words at the reunion and it seemed insincere to suddenly get in touch because she was gravely ill.

But when she died this spring, at age 43, I wished I had broken with tradition. I could have told her how much I enjoyed her spark as a teenager, or at least offered words of support.

Somehow, though, I don't think she would hold it against me.

That's the kind of family we are. 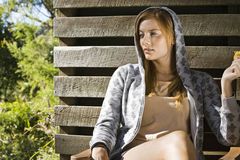