Our bus arrived half an hour early. The four or five of us who had separately travelled there for the same purpose gathered on the steps of the gas station that doubled as a bus stop, and waited like orphans for our adoptive families. Surely they would come soon, to house and feed us, and to answer our halting, poorly phrased, badly pronounced questions about whatever we had enough vocabulary to ask.

This was the start of a week-long French immersion experience I had with a few dozen other grown-ups in Trois-Pistoles, a village two-and-a-half hours down the St. Lawrence from Quebec City. Many of us were there to tune up our French for our jobs, some were there for personal reasons, and a few – like me, who will be living and reporting in Montreal for the next eight months – came for both.

French immersion in Canada is mostly for kids, who have the time for it, and whose minds and mouths haven't bonded with their mother tongue as firmly as most unilingual adults' have. The idea is to replicate the all-encompassing linguistic environment of infancy, though French immersion for kids is often a gradual thing, with little second language at first and more each year.

The course at Trois-Pistoles, which was run by the University of Western Ontario, was much more intensive than the immersion classes my kids attended. We were sworn to speak no English all week, and the days were planned to give us as many opportunities as possible to hear and speak French, from morning till night. We had several hours of classes each day, watched French films and talked with the locals, and spent our meal times struggling to say things to other anglophones that would have been way easier to say in English.

I had studied French in non-immersive schools, and had made further efforts at Alliance Française and elsewhere to become reasonably competent. But my French had become moth-eaten, and the holes showed whenever I groped after a forgotten word or conjugation.

After my one week at Trois-Pistoles, I was pretty sure that the deep-end way to learn a language is indeed the best, for adults as well as kids. But I also found that when you try to learn like a child, you may also end up revisiting other situations from childhood or adolescence.

That was impressed on me in the nicest way by the locals who were contracted to look after nous les orphelins. When I arrived at the door of Marie-France, who would be feeding home-cooked meals to me and three others, I couldn't help thinking of the woman my mother paid to give me lunches in her home when my parents were at work. There was the same feeling of brokered familiarity around the table, and the same unquestioned delegation of authority as to what would be cooked and eaten. I sensed that for the three young women who also ate there, going to Marie-France's house, listening to her talk about her song birds and washing up after lunch, was just like going to a grandmother's house (and yes, I took my turn with the dishes).

When I returned to my lodgings at Michel's house each evening, my host was always waiting, however late it might be, with questions about how the day had gone. He was like a genial dad checking up on his son after a day of school and undisclosed shenanigans, though Michel is probably no older than I am.

During the first session with the instructors, at which our proficiency levels were confirmed, I could feel a rekindling of my nerdy school-age need not just to show my knowledge, but to impress the teacher. Emilie was not impressed, and I felt the same twinge of disappointment I would have at the age of 10.

Our vehicle for outings was a big yellow school bus, just like the one that took me on field trips in elementary school. There was a head count each time we got on or off, and after a classical concert one evening, the director (the efficient and good-natured André Beaudin) got quite agitated when the bus started to move before all had been accounted for.

But the most profound reversion occurred in the language. Agreeing to speak only French immediately meant slipping down several or many rungs from whatever degree of language mastery we had spent our lives acquiring. Being deprived of that full range even for one week showed me how much I rely on my ability with words, not just to communicate but to be myself. In French, I was someone else, a strange hybrid of adult and child, able to talk about complex subjects but sometimes only with the vocabulary of a 12-year-old.

The focus of our classes was strongly oral, with frequent ice-breaking games to compel people to talk or to drive their conversations in grammatically useful directions. The emphasis on speaking encouraged the compulsive talkers, and enforced garrulousness on those inclined to be just the opposite. I felt I was getting to know one Toronto university instructor – and there were a lot of teachers among these students – when he mentioned that he was generally more reserved in English. I realized I had only encountered the man in translation.

Western began its Trois-Pistoles immersion school in the 1930s, decades before the immersion concept trickled through Canadian school systems. The town must have been grateful for some educational tourism during the Depression. Trois-Pistoles had been a place of big dreams at the start of the century, as you can tell when you visit the enormous church of Notre-Dames-des-Neiges, planned as a cathedral and fully completed in 1904. But the town's metabolism has been slowing ever since. The rail station that began delivering progress by the car load in 1873 now stands unused, the only daily train stealing by in the middle of the night. The high school where we took our classes was built for 1,000 students, but only about 300 will show up for class this fall.

All of this has made the annual influx of anglophone students during the 12 weeks of summer school increasingly important for the local economy. The only outsiders with whom Trois-Pistoles has a similar bond are the Basques who sailed up the St. Lawrence in the 16th century to hunt whales. The Basques left no descendants and almost no relics, but they're memorialized all over town, at a Basque adventure park and in business names such as the Salon de Quilles des Basques – the Basque bowling alley. Those long-ago whalers are the romantic, vanished Others who animate the local imagination, as "Indians" used to be for many Canadians, except that the Basques actually did disappear from le fleuve.

Eight decades of immersion-school tourism don't seem have to dented the town's staunchly francophone character – and why would it? The locals never hear any English from their visitors, and are only aiding the cause by sticking to French.

"The whole town is a school," the director told us the first evening. It was a short but eloquent summary of Trois-Pistoles' genial acceptance of nous orphelins, and of the way everyone around us seemed to have joined a seamless conspiracy to get us to speak, think and live in French. I was much more fluent and confident by the end, and found the whole exploration so engaging that I had mixed feelings about returning to an anglophone environment, where anglophones actually converse in English.

On the last day, I caught a ride to Quebec City with a school principal from Grande Prairie, Alta., who wasn't in my class but with whom I'd spoken several times during the week. We spoke French the whole way to Quebec, and through our lunch when we got there – the most extended gabfest I'd had in French since arriving. What else were we going to do? At that point, having never encountered each other in English, it was the only language we had in common, and the only reason we were there at all. 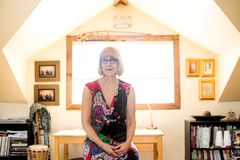 The Oxford Dictionary now shops at the dépanneur
June 25, 2015 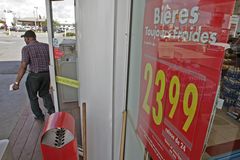 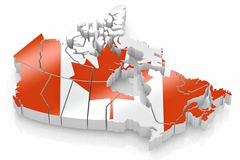