When Jay MacGillivray was critically ill and in intensive care last year, her daily companions and caregivers in the hospital were mostly her exes – including Joyce Brown, her closest friend and, for most of the 1980s, her romantic partner.

To many straight people, this kind of story may seem startling. Heterosexual models regarding ex-partners tend more toward "everything you own in a box to the left" than "that's what friends are for." The idea of remaining intimate with an ex-partner, of creating a familial long-term relationship with someone after the romance is over, feels foreign. But among lesbian, gay, bi, and queer people there are many such stories – stories of ex-lovers who have become close, intimate friends over time.

As boyfriends, David Demchuk and Asif Kamal first lived separately, then in different wings of a large building. Three years after their breakup, Demchuk moved just down the hall from Kamal. Their lives are entwined to the extent that they discuss retiring near each other, as well as sharing meals and trading talk of their present-day relationships.

And when queer poet Andrea Gibson tells people that she and her ex-partner have recently purchased a home together, the news is often met with intense surprise – sometimes so intense that she doesn't get to add that both of their new partners live there, too.

The question of why LGBTQ people often stay so close is compelling, and also somewhat contested. Gibson, who lives in Colorado, put very plainly what others alluded to. "We've lost so much family. A lot of queer people, we can't count on the families we were born into," she said. "When we meet people that really get us, that are on our side? We'll do a lot more work to keep those people in our lives."

Demchuk is a Toronto writer whose current partner also lives in the same downtown Toronto building as he and Kamal, but in yet another apartment – one he shares with his ex, a woman. Demchuk, who was interviewed with Kamal, spoke frankly about the reality of getting older. "We need each other," he said. "I have health issues. My will and end-of-life wishes are with my partner and with Asif. Absolutely not my family of origin."

Kamal joined in. After they broke up, Demchuk remained an important presence in his family's life as well. "Before my father died, he had Alzheimer's, and I was caring for him and supporting him," he said. "I said to David, listen. I have life insurance. If I make you the beneficiary, will you take care of my dad [if I die]? David said yes. Immediately, yes." This was four years after they'd ended their seven-year relationship.

While this kind of post-relationship connectedness might feel like a rule to some, there are plenty of exceptions. Jessica Miller, a home organizer in Toronto, isn't interested in being friends with her exes and she feels some judgment because of it. "I am a queer Jew and I mostly date queer Jews, and that's a subset within a subset," says Miller. "Every year on Shavuot, I will run into every Jewish woman I have ever dated. And I will be cordial, but I am never very happy about it." Still, she says, there's a social expectation that she will be glad to see them.

In 2013, photographer and filmmaker Michele Pearson Clarke started a photo project called It's Good To Be Needed, a series of portraits of ex-lovers who have not remained friends, holding hands. It was motivated in part by a need to address the feeling of "double failure," as she put it, of having "first failed to stay married and then failed to stay friends like 'good queers' do."

Oakland University researchers Justin Mogilski and Lisa Welling recently completed an 860-person study to discover why people wanted to be friends with their exes. They found many cited practical reasons, like convenience and access to sex, as the biggest motivators. That study, however, only included people in "cross-sex" friendships – that is, straight people and a small sprinkling (about 3 per cent) of bisexuals. While the work illuminates heterosexual behavior, it fails to address queer community norms and how LGBTQ experiences of breaking up might diverge from their heterosexual counterparts. It's a knowledge gap that's replicated in other academic studies, creating an absence of understanding about unique factors that sometimes make things hard for queer exes.

Take the issue of intimate partner violence or abuse, which is usually framed as an issue of female victims escaping male abusers. For LGBTQ people leaving abusive relationships, the social expectation of friendly exes can be especially alienating. The victimized partner may have to repeatedly defend their decision to stay away from the abuser. Eric (who, to maintain anonymity, preferred not to give his last name) left his abusive relationship with a male partner but didn't feel ready to tell friends why he'd broken it off, because he "didn't want to be seen as a drama queen," he said. Later he found out that the same man had been abusive to several other boyfriends. Eric eventually moved to avoid having to negotiate social situations that might include his ex.

Even in breakups – straight or queer – that are less felonious, many find a cooling-off period invaluable. Gibson, who tours frequently, noted that being apart from her exes while she traveled probably contributed to the ability of both parties to recognize what they missed and loved about each other. Early on, Demchuk and Kamal had an unspoken agreement that discussing other lovers was off-limits. Now, though, the two often share joys or complaints about their current partners.

When MacGillivray was ill, none of her cousins or children, with whom she's very close, lived near enough to her to come to the hospital to visit every day, except her young daughter Lita. The only adult who made it daily was her ex. "That was Joyce," she said. "Every morning, every night. And others with her; five of my exes. They all knew who each other were, they all banded together for me. But Joyce, she's my compass for 35 years now. I tell anyone I get into a relationship with that Joyce and I don't have sex, but we have deep, deep love."

And if they're not comfortable with that?

"Then it doesn't go any further," said MacGillivray, implacably. "Joyce is non-negotiable."

Ontario’s multiparent LGBTQ families have another reason to celebrate this season
December 22, 2016 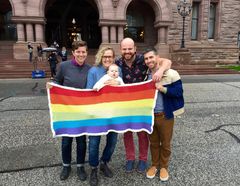 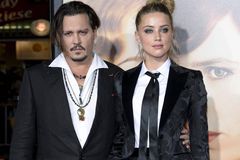