The photo shows a couple kissing, the wife patting her husband's denim-clad rear.

The scene was their son's baseball game - 12 days after the pair, Larry King and Shawn Southwick, each filed divorce papers citing irreconcilable differences in the demise of their 13-year marriage.

It wasn't the first time they'd flip-flopped: Just 24 hours after announcing their split earlier this month, the anchorman and his country-singer wife hugged it out at another Little League game. Later, they strolled through Beverly Hills, Ms. Southwick beaming.

Still, the divorce would go on, Mr. King's legal team insisted three days later - only to call a truce the next day: "It was decided that there will be no divorce activity for two weeks as several issues need to be discussed and resolved," the lawyers told reporters.

(The pair is now in therapy, ostensibly for the benefit of their two sons, 11-year-old Chance and nine-year-old Cannon.)

Even without a pack of paparazzi keeping watch, rescinding on a divorce after announcing it puts enormous pressure on the frayed relationship, experts say, and can irreparably damage a couple's reputation among those they've bleated to about it.

"You lose credibility because you cried wolf," says Bonnie Eaker Weil, a New York-based psychotherapist and author of Make Up, Don't Break Up.

"The people that you've told now know intricate, intimate details, and then you get back together and you're going to go out with them as a couple. People don't take you seriously."

Even years later, the loss of credibility can trip up a couple, says Julie Collins, co-author of How to Make Divorce Fun.

Maybe not in Hollywood, which is rife with back-and-forths. Aside from Ms. Southwick, Mr. King has had six wives, one of whom he divorced twice. Other memorable flip-flops include Sean Penn and Robin Wright, Melanie Griffith and Don Johnson and Pamela Anderson and Tommy Lee - now all split for good it seems.

Although a declaration of divorce is "one of those below-the-belt hits" that shouldn't be uttered unless a spouse really means it, many couples like to bandy about the D-bomb, Ms. Eaker Weil said.

"It's a very serious statement, but people throw it around like they throw the word 'love' around."

She said changing course after making a divorce announcement can be especially unhealthy for spouses who have confrontational family members.

"It's very destructive for anyone else to know because they interfere," Ms. Eaker Weil said, warning against overeager friends and family who act like "marriage counsellors and spies."

Instead of spilling it to everyone around, she recommends that couples sit down with a therapist at least five times to discuss the decision before even heading to a lawyer.

Even at the legal stage, however, reneging on divorce is common.

Connecticut-based lawyer Laurie Giles say it happen so frequently that she now often double and triple books her first consultations.

"More often than not, they don't show up," said Ms. Giles, who is the author of What Now, Divorce Planning.

She said when they do show up, some couples use the appointment as a game.

"I've had people come into my office and ask for a business card after an initial consultation so they can just throw it on the dining room table to scare their spouse."

Many others who begin the proceedings then attempt to hit pause.

"Sometimes the 'put it on hold' lasts literally a day and I get the call the next morning saying, 'That's it, I'm not trying,' and sometimes it's six months later," Ms. Giles said.

"They need to be able to tell themselves and their circle that they did everything they could to save the marriage."

But even such well-intentioned dithering can make things awkward for family.

"They have to be careful about throwing judgment out, particularly in the very beginning," Ms. Giles said.

As for the announcement, whether it's classy or trashy is a "personal preference," said Ms. Collins, a Casper, Wyo., mother, now twice divorced.

"My friend at work let her husband pick the papers up at the lawyer's on his lunch hour. Or you can make a big spectacular scene and hire somebody to do a singing telegram while they serve the papers at their birthday party. That happened to [co-author Trey Anderson] It depends on your personality and how vindictive you are."

Ms. Eaker Weil suggests keeping it tasteful by e-mailing or calling those in the inner circle together so "people don't take sides."

"It makes sense to say, 'We're at the point where this marriage is just not working out and I think that we're going to separate.' Use the term 'we' instead of 'I'm going to leave him in the morning,'" Ms. Giles offers.

She allows that ultimately, uncertainty is common among many contemplating divorce.

" 'Really sure' sometimes doesn't come until well after the divorce is final."

Weighing the announcement of an impending divorce? Tonja Evetts Weimer, author of the new book Thriving After Divorce, offers her insight. 

"If you're arguing, you're tired and don't make clear decisions in anyone's best interests."

"Be still until you can get a hold of yourself. … That holds true in any crisis situation."

"Talk to someone whose counsel you trust. It could be a good friend or a mentor, someone you've gone to in the past."

"You need to have boundaries because you're in a weakened emotional state. People will ask you questions and if it's not the right person, you don't want to tell them things you'll regret. Or you may cross someone else's boundary and tell them more than they can handle."

"Do not let the rest of the world define you in your divorce. You define what your divorce is going to mean to you." 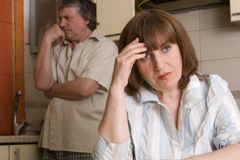