Deborah Feldman has stripped the cloak off the insular Satmar sect of Hasidic Judaism, offering outsiders a rare glimpse into the ultraconservative world in which she was raised.

In a tell-all memoir, titled Unorthodox: The Scandalous Rejection of My Hasidic Roots, the 25-year-old New York-based author describes the paranoia and oppression of her Satmar upbringing in Brooklyn's now-trendy Williamsburg neighbourhood and chronicles her struggle to eventually break away.

With a mentally disabled father and a mother who left the community, she grew up with grandparents and extended family members who dictated what she read, what she wore and whom she would marry at the age of 17. After marriage, strict rules and rituals loomed over even the most intimate aspects of her sex life.

Over the past few weeks, Ms. Feldman has received overwhelming praise. She has appeared on The View, while her book has made it onto the New York Times bestseller list and on Oprah Winfrey's "Must-Read" list.

At the same time, she has been reviled by members of the Orthodox community, who question her credibility. An entire blog, titled "Deborah Feldman Exposed," has been dedicated to "exposing the lies and fabrications" in her story.

Ms. Feldman spoke to The Globe and Mail by phone from her home in Manhattan:

Were you ready for all the attention your book has received?

My publisher was hoping the book would sell moderately well. But nobody ever sat me down and said, "Oh by the way, your book could explode." So when that happened, and my life changed drastically overnight, it was a tremendous shock. A lot of people have told me even I have changed. It makes you stronger and more determined, in a way. I feel more prepared now to make my mark, in a sense.

What about all the negative reaction and the accusations that you weren't truthful?

In the end, the controversy has really contributed to the success of the book. It's really very telling. It has made the book appear almost more truthful in a way, because if people are so upset about it, there has to be something to be upset about.

People have basically said I alleged that that murder happened. Which is really odd, because in the book, I don't make an accusation. I was actually relating a conversation I had [with my husband]that was really instrumental for me in changing my life. After my son was born, I became afraid that he would be subjected to people who had abusive tendencies and who allowed those abusive tendencies to thrive because the community was willing to cover them up.

In no way was I trying in this book to make some sort of accusation or to in any way suggest that I knew specific details of crimes that were happening. So it really shocks me that people have focused on this two-paragraph section in a much larger story, but it also makes sense because if we can focus on this, we can distract from what's really happening, which is the story of a woman who felt oppressed by a community that is very biased against women and that promotes gender discrimination.

But obviously, if true, it's very serious. Do you believe the story is true?

When my husband came home and told me that story, he was visibly shaken and upset. It wasn't like he had any reason to lie to me. He was disturbed and he was upset, and so was I. And we both felt under a lot of pressure to keep it secret.

They didn't have a picture of the Twin Towers that day. But I did find out about the Twin Towers burning only at 3 o'clock in the afternoon. It's one of the reasons I put the disclaimer on the front of the book. There are plenty of events in the story that have been chronologically reordered. I decided to consolidate it for the sake of the narrative.

Should people read your book with a grain of salt?

The disclaimer is there for a reason. I wanted people to read that before they read the book and understand that that disclaimer [which states certain events have been compressed, consolidated or reordered]applies to the entire story.

In that disclaimer, you mention the need to protect certain individuals and change identifying details. Did you feel protective of any aspects of the community itself?

There's a portion in my life where I get married and, suddenly, my privacy is completely taken away from me. I felt deeply betrayed, but I learned privacy is not something to respect in that community. It gave me the impetus to write this memoir because I was taught and encouraged to completely explore the most intimate details of my life and lay it out in public. And so I had no qualms of doing that outside the community.

Were you ever concerned your book might contribute to religious intolerance or stereotyping?

I think that anyone who thinks that is lacking a certain type of sensitivity and intelligence because are we really telling people to be silent and not tell their stories to keep the peace?

You mention you tried to "unJew" yourself, but eventually came around to being proud of being Jewish. How so?

One of the things I discovered after I left, which I never really understood, is that the Jewish community, globally speaking, is incredibly diverse. Discovering that has absolutely fascinated me and thrilled me because I now feel a part of that greater global Jewish community. I'm not just being isolated in a marginalized, fundamentalist sect.

In Satmar, we're raised to believe that only we are the real deal and that everyone else is just faking it and is no better than Gentile.

Has leaving the community meant severing all ties?

Definitely, yes. But I can't say I'm really sorry for it because those ties were really superficial. There's so much fear of gossip, nobody really confides in each other or is honest with each other. Now that I've left, I've formed these incredibly intense emotional friendships. I feel more love and support than I've ever had.

In a recent interview, you mentioned that the rules and rituals of the sect may come from some sort of post-traumatic stress disorder. Can you explain?

A woman came up to me yesterday, who grew up Satmar, and she was struggling with exactly this concept. She said, "I don't understand what it is, but I was raised with this Satmar mentality, where it's almost a kind of paranoia. Whether it comes from the Holocaust or the pogroms, I don't know."

Definitely, growing up, I saw the obsessive rituals, I saw the paranoia, I saw this fear. We were building walls as high and as thick as we could. Those walls weren't real, but it made people feel safe. I still don't understand it. I just know there's something about the Satmar life that has very little to do with religion and a lot to do with trauma.

Seeing as how they are so distrustful of the outside world, do you see any way for secular society to reach out to people inside the community?

I do. I believe the costume and the reputation that Hasidic communities have all over the world are to deliberately distance themselves from secular society, and we need to start bridging that gap. There are a lot of people who are trapped within that world and would like to reach out but who are afraid. They're afraid that outsiders see them as bad people or extremists and fanatics.

For outsiders, it would be lovely if people could put a little effort into facilitating that trust and understanding. I would have reached out as a child to form connections with people from the outside if they hadn't been afraid of my costume. From the other side, I would love to encourage some sort of reform within these communities where they would allow people more education and more interaction with the outside world. 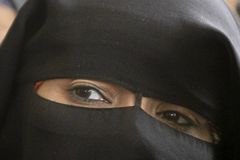