Ann-Marie MacDonald is the author of the novels Fall on Your Knees and The Way the Crow Flies. Her next novel, Adult Onset, will be published in late September by Knopf Canada. The following is an edited and condensed transcript of a speech she gave to the Law Society of Upper Canada in Toronto this week.

Thirty years ago on Pride Day, I was dancing on Church Street. It had been closed off I think for the first time. I was wearing my best ripped jeans along with a windbreaker of my dad's from the fifties. I was exhilarated, energized, outraged, overjoyed. I was drinking. I was flirting. I was proud. Not a single beer company had signed on. There were no "booths". I don't know if it had even occurred to anyone to invite the mayor, but, in any case, the city was still looking the other way and would do so until 1991. In 1984, Pride was cheekily scheduled to coincide with Canada Day, and we didn't need anyone's approval.

Earlier, during the parade up Yonge Street, I watched as the humble, remarkably unflamboyant PFLAG contingent marched past – that's Parents and Friends of Lesbians and Gays in case anyone's too young to remember. I had tears in my eyes and rage in my throat. I, like so many others that day, was exiled from my family of origin. "I wish you had cancer," said my mother, frequently, among other curses. My father said it with silence and ice.

I got used to being in exile. I eschewed the mainstream. I rejected marriage and children as patriarchal traps. I was not going to become someone's mother.

When we adopted our first baby, one social worker explained to us that the open-adoption movement had taken a leaf from what she called "the pride playbook." Open adoption itself was inherently queer, insisting as it did on coming out of the closet about how families are made and on the importance of children owning their own stories. In that moment, I witnessed queerness being employed as a helpful metaphor by a traditionally straight institution. It was like seeing a river change direction.

So okay, I was someone's mother. I didn't need a paternalist law rooted in the ownership of private property to validate my union with the woman I loved.

We got married a week after the law came into effect. I remember where we were when we heard the news: driving back from the East Coast with our baby in the infant car seat behind us, in our station wagon. My mother said, "God bless you and Alisa, you're wonderful mothers and a lovely couple," frequently, among other blessings.

The baby is now 11. She overheard that Alisa and I were talking about World Pride and the fact that I had to think of something to say to a bunch of lawyers. I was just going to go with, "That will be 750 bucks an hour plus HST." The 11-year-old said, "If you forget the past, it grows inside you." The distinguished intellectual George Santayana said, "Those who do not remember the past are doomed to repeat it." But I think my 11-year-old's statement has the edge. Both, however, beg a few questions. How do you remember the past without holding a grudge? How do you assert your identity without in turn exiling others? How do you know the difference between privacy and silence? And the difference is crucial because silence equals death.

I think there are two active ingredients without which nothing happens. One is anger. The other is love. It is a volatile mixture. Most of us have been burned trying to get the balance right. Many of us have been blown up. A few years ago my father sent me an e-mail. "Hi sweetie pie, We just watched the video entitled It gets better. This is a very good piece of work that should be shown in the schools and to youth groups. Mum and I are so proud of all you do professionally but most of all we just love you for yourself and for bringing Alisa and two beautiful granddaughters into our lives. Love Mum and Dad."

I was touched yet oddly angered and swiftly guilty. But like detective Columbo from the old seventies series, "You just can't let sleeping dogs lie." I knew there was something missing.

The whole story. If you forget the past, it grows inside you. My past was locked inside me, growing like a tumour. My parents had their change of heart decades ago but my heart had stayed locked in time. Opening a heart is not pretty. And you may die on the table. My past grew inside me, built up pressure, fumes from the wrong mix of love and anger, a formula for self-hatred that had outlasted the blessings, the babies and the law. Rage by turns righteous and free-floating, freelance rage, rage without portfolio, naked rage without so much as a fig leaf of rectitude, chemical rage directed at myself, directed at my partner. Then one day, like a missile locking on a target, I watched as it moved a few degrees and aimed squarely at my children.

Self-hatred doesn't just go away. It doesn't just always get better, not on its own. The past grows inside you. Will it be a tumour or a story that can be shared and spread out across the sky? We need our stories. Remember who we are. Remember where we come from. Don't skip over anything. Celebrate but never forget. I try every day to do the hard thing, the simple thing, which is to open my heart and change it. My mother said, "I wish you had cancer." My mother said, "God bless you and Alisa. You are wonderful mothers." There is a Roadrunner-Wile E. Coyote-sized canyon between those statements. A gap. I fell into it and hit bottom when I found myself about to hurt my child.

But it doesn't take a physical blow. You can abuse a child without breaking a single law. All you have to do is fail to see them. Exile is hard; coming back from exile can be harder. Pride is symbolized by a rainbow, not just because it leads to Oz or a pot of gold or even because it signifies diversity, but because it spans the sky and holds us all. What matters most is not what's over the rainbow but who is under it.

Pride guide: Where to go during Toronto Pride week and what not to miss
June 20, 2014
WorldPride special: An LGBT history of Toronto
June 19, 2014 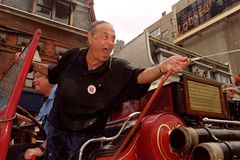 These WorldPride exhibitions put the complex themes and shifting identities of LGBT artists in context
June 20, 2014
In pictures: Couples in Vancouver share why Pride matters to them
August 2, 2013
Two million expected to attend WorldPride festival in Toronto
May 22, 2014 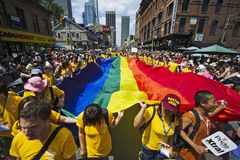 Toronto shows its support by raising pride flag over city hall
May 16, 2014 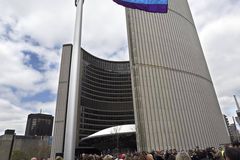