For divorced parents, this weekend is not only a minefield of potential blow-ups – where will the kids eat the big meal? How fast can I get them to their dad's house? Why did my ex-wife tire them out before my visit? – it also marks the gateway to a season of more of the same.

But for parents who are dialled in to the growing culture of "co-parenting after divorce" espoused by family lawyers, mediators and self-help authors, it doesn't have to be a nightmare. It might make you a better parent.

The co-parenting field has blossomed in the past 10 years. More men are assuming joint custody after divorce and expect to be full-fledged parents. More couples are seeking out "collaborative law" practices to keep them out of nasty court disputes. And, in a society obsessed with ferreting out the latest thinking on good parenting, the well-known negative effects of divorce are to be avoided at all costs.

"Children suffer when their parents are fighting and arguing," says Brian Galbraith, a family lawyer in Barrie, Ont. "There's a saying we use: Do you hate your ex more than you love your children? Because if the focus is on the children, parents can co-operate and make decisions together."

And there are a growing number of cheerleaders who have been through it and say it can be done. In Tammy Daughtry's new book, Co-Parenting Works! Helping Your Children Thrive After Divorce, she outlines research that shows that after about two years, a divorced couple can succeed at uniting as parents.

The end of year one is the hardest, she says. But, "by the end of the second year, most research shows parents can come back to a stable place, possibly more stable than before their divorce."

The key, she says, is to work toward behaving like "co-operative colleagues" rather than foes.

That's the philosophy behind a new co-parenting tool called the Parental Planner created by a Sherbrooke, Que., couple, France Gionet and Paul Doyon, who are each co-parenting kids from previous marriages.

The planner, available in some lawyers' offices and at Parentalplanner.com, functions mostly as a calendar of events, with spaces for sharing news about a child's mood, school events and expenses.

Like a travelling executive, the child totes the planner with him to each household. It features plastic sleeves for such items as health cards and school permission slips.

Don't underestimate the power of an errant permission slip, either, Ms. Gionet says. Imagine one parent signing a form about an outing and forgetting to tell the other, but the outing takes place the day the non-signing parent has custody.

"So let's say Dad signed the permission and forgets to tell Mom," she says. "Mom doesn't know about it, so she doesn't know that she's supposed to take her kid half an hour early because the bus is leaving early. So when the child gets to school the bus has left and he's missed the outing. That's just not fair. … This type of situation is not for the child to be penalized."

Aside from stemming organizational chaos, the planner steers parents away from the pitfalls of the blank journals many lawyers and family coaches recommend to co-parents, says Ms. Gionet.

"Some people get very creative: Don't forget the talent show next year. It would be nice if you came this year. You know, she noticed last year that you weren't here. You should think about your daughter more often and not think about yourself. ... Three pages like this," she says. "Some people get very inspired. And then when it goes back, there are three more pages also. It's pathetic. It's not helping. It just fuels the anger."

In her version, parents are asked to paste a photo of their child on the first page of the planner to remind themselves whom all this to-and-fro is really about.

Lindsay Cross, a blogger at the new Canadian site Mommyish.com, is sharing the experiences of co-parenting her toddler with her ex in the column Splitsville. Mommyish joins a growing roster of such sites, including one one co-written by co-parents: When the Flames Go Up.

Ms. Cross says some of the biggest issues for her have involved how to maintain consistent discipline and how to get over the angst of not knowing what goes on when her daughter is with her ex.

"You can't know. It's not your right to ask; you have to trust them. You give up a lot when you decide to co-parent," she says.

But having a firm plan agreed to by her ex helps keep things neutral, she says, and also gives her a way to stay calm in the face of holiday curveballs, such as the time her former mother-in-law called her directly to ask for more grandma time.

"In that moment, I said she had to talk to her son. It wasn't her favourite thing to hear."

But it curtailed an emotional tug-of-war that her daughter may have overheard, an important principle for those who champion co-parenting.

"I do try to think long term. She will get over this. If I make it a bigger deal, it's going to continue to be an issue," Ms. Cross says. "The faster I can move past it, the faster she can move past it."

10 THINGS KIDS WISH THEY COULD SAY TO THEIR DIVORCED PARENTS

1. Don't say mean things about my other parent – I want and need to love you both.

2. When you criticize my other parent it makes me angry at you.

3. Don't make me pick who I want to spend time with – it's not fair and I will get hurt if you do that.

5. Don't use money to win my love – be a stable and loving parent and I will love you no matter who has the "most" money.

6. Don't keep me from seeing the other parent – if you do, I'll grow up to resent you.

7. Get a counsellor to help you with your problems – I need you to be strong and stable for my well-being. I don't want to hear about your dating and your disappointments. Talk to someone else. Don't make me be your parent.

9. Laugh and smile – I want to enjoy my life and your mood has an impact on my mood.

10. Don't forget that I live between two completely different houses, rules, traditions and attitudes. Be patient with me when I forget things or need some time to adjust from house to house. 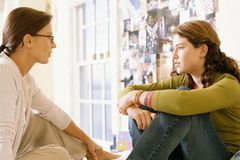 Newly single and on vacation with my three-year-old son
February 18, 2011 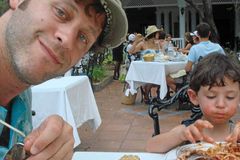 For kids, divorce can be a relief - 'one of the best things' ever
March 20, 2008
Follow Tralee Pearce on Twitter @traleepearce
Report an error Editorial code of conduct
Due to technical reasons, we have temporarily removed commenting from our articles. We hope to have this fixed soon. Thank you for your patience. If you are looking to give feedback on our new site, please send it along to feedback@globeandmail.com. If you want to write a letter to the editor, please forward to letters@globeandmail.com.
Comments