I'm a 23-year-old college student (female) and my new girlfriend is extremely opinionated, political and loves to argue. I've "come out" to my parents, and they were very understanding and supportive, but this Thanksgiving will be the first time they meet her in person.

I'm worried about their reaction. And also my extended family, including my 77-year-old grandmother, who I'm pretty sure has never met a lesbian before (except for me, obviously, but she never knew), but has let it be known she does not approve. Then there's my uncle, who drinks too much and says stupid jokes in the name of "what we're all thinking but don't dare say" – making everyone around him uncomfortable (it's one of the reasons his wife divorced him). To top it all off, my girlfriend's vegan and my family are all carnivores who like to tease people who don't eat meat – the type of thing that drives my girlfriend crazy. I'm worried the whole thing is a recipe for disaster, but I don't know how to avoid it. Any thoughts?

I think you're right when you say "recipe for disaster." And the recipe is:

Take one vegan lesbian, coated in prickly opinions. Allow her to be lambasted and slow-roasted by a starchy septuagenarian. Then throw in a pressure cooker full of zinger-prone carnivores, add one pickled uncle, fasten lid and set for KABLOOEY!

Now, Damage Control, as the name implies, is ipso facto ex post facto – Latin for "by its very nature after the fact" (I think).

But, in this case, I am chuffed (Britspeak for "pleased and proud") to be in a position where I might actually be able to defuse a potential social bomb before it blows. I just hope that you're reading this some time before the turkey drops.

All right (columnist rolls up sleeves): Let's get to work. There are a lot of elements here. Let's start with Uncle Drunky.

Sounds as if he's already in part lost a marriage to his bibulous, blurtaceous outbursts. No time like the present, I'd say, to take him aside at some point and say: "You know, [his name here], this whole saying stuff you think people are secretly thinking thing isn't really working for you. Could you maybe, for the sake of family harmony, be more avuncular, less drunkular – i.e., cool it on the booze, maybe more dignity, gravitas and quiet wisdom from your end of the table?"

He might squawk and flap and stamp around like the turkey you're about to consume was doing a few weeks ago, but remember, you're doing him a favour in the long run – especially if he ever hopes to date again.

Unless you're really, really funny, all that slurring out "stuff we're thinking and do not say" says to a prospective mate is "poor impulse control."

Speaking of alcohol, maybe don't drink too much yourself. Keep your own wits about you. It's fun to get tipsy, but I've noticed over the years that alcohol can definitely have a gasoline-on-fire effect when it comes to dinner-table discussions, and what might have been a pleasant and intellectually improving discussion can turn angry and ad hominem.

I wouldn't try to change the septuagenarian's stripes, or curb the carnivores' enthusiasm. Better, I think, to prep your girlfriend like a boxer before a big bout.

Rub her shoulders, give her a pep talk: "Darling, listen: I know you love a good debate and I love that about you. But maybe just for the sake of tonight, and in the spirit of everyone getting along, let's keep the gloves up, bob and weave, dodge jabs, stay on your toes, and in general just kind of Rope-a-Dope my relatives, okay?"

Even, or especially, if they "rib" her about being vegan, encourage her to let it slide like water off a tofurkey's back. Veganism is a great, ethical, and healthful choice. But to debate it on Thanksgiving with a bunch of drunken carnivores? Boring, apart from everything else.

In general, lead by example. Don't snap at any dangled bait. Ignore any chum your family might throw in the water. Rise above any boorish or churlish behaviour.

Above all, remember, in an increasingly tumultuous world, to give thanks, for being alive, having a family, no matter how eccentric, and food on the table, vegan or not.

How should I deal with my husband’s unreasonable demands about our family trip?
September 28, 2017 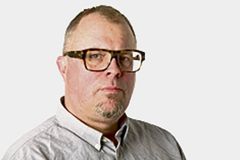 My mooching cousin is becoming a nuisance. What should I do?
September 21, 2017

My boyfriend’s father won’t stop making racist and sexist comments. What do I do?
September 14, 2017