"I love you," Rebecca Eckler told me after I said hello. "I love you, too?" I responded. We laughed. It was a joke. She knew I was calling to discuss expressions of affection - those three noteworthy words, but also compliments in general - in response to the complaint in her new book that men don't deliver them enough.

We've all heard this thing about men being "less verbal" than women, which always strikes me as condescending. As if we're infants. Of course, this happens to be the premise of Ms. Eckler's latest book, How to Raise a Boyfriend: The Definitive Manual for Educating Your Man. She has recently realized, she tells us, that a male partner needs to be "raised" - taught good manners, essentially - just like she raised her daughter.

It's harsh, but it's also hard to feel too insulted, because compared with some of the rude exes she trots out from her past and her girlfriends' pasts, most guys will feel like genius boyfriends and husbands.

That said, Ms. Eckler does have my number, to some degree, in her chapter called "Do you Think I'm Pretty? Do I Look Good? Do You Like My Hair Cut? Then Why the [here she uses a very unladylike word]Don't You Say So?" Also in the one that follows about male hesitation to say "I love you."

My own reticence first hit me - literally - years ago, when I picked up my Grade 9 homecoming date and she slapped me in the face after I didn't tell her how good she looked in her green dress, even though she did look good, very much so. I was shy, but also we were friends and I didn't want to take the risk of making my feelings known.

Psychologist Geoff MacDonald, who studies intimacy at the University of Toronto, told me that men in general get set back in this arena from day 1. "Masculinity is defined around traits like independence and your ability to take care of yourself," he said. Telling someone you love them is, in part, "an admission of your emotional dependence, and that it would hurt to lose them."

Kids who receive negative feedback early on when expressing this type of vulnerability end up showing a greater degree of what social psychologists call "avoidant attachment."

"It's a style of relating to other people that involves emotional distance and self-reliance that has at its root a fear of abandonment," says Dr. MacDonald, adding that while it is present in both genders, it's seen more in men.

So we're told to be strong and not needy, and now Ms. Eckler is asking us to be vulnerable, too. See how confusing it is to be a man these days? Wahhh.

In her book, Ms. Eckler bravely contacts her ex-boyfriends to get their side of the story. "I want you to imagine me with my best friend," says one. "What if I saw him and said, 'Wow, Jon! You look great today! You look awesome today! Did you get your hair cut?' It's insane, right? I was not in the habit of giving compliments."

Unfortunately, this insightful ex ruins his credibility a little by going on to say that if you start complimenting a woman, "it will never end and you have to do it every day." Sounds like a really upbeat guy.

But before slagging the strong, silent (and likely reticent) stereotype of man too much, I think it's worth considering his value. I don't necessarily think of love or praise as exhaustible resources, but at the same time, there may exist something like "compliment inflation." Just as the influx of money into an economy causes the currency to lose value, so might a flood of compliments or declarations of love make them nearly meaningless.

And the reticent man has implicitly known all along that words are problematic, vague at best. Words may be a promise or a reactivation of memory, but a look, touch or act of generosity can say more in the moment. One woman I met recently understood this, telling me that she wasn't much for compliments. "I'd rather my boyfriend show up at my door with a burrito," she said.

Some men have even learned how to emote too well, and are in danger of becoming disingenuous Don Juans or reality-TV stars. "In too-large doses the effect is strange," another female friend wrote me in an e-mail. "I started to feel like the mean one, the cold fish girlfriend with the lovely expressive guy. And who wants to feel like that!? I felt pushed out of the 'loving partner' limelight. There's only so much room in there."

The lesson, as usual, is to strike a good balance. Men who never say a nice thing should probably try it out, and maybe sooner rather than later. Ms. Eckler's therapist - who also has a recurring role in her book - warns us that in his experience most marital breakdowns and infidelities happen when "the women aren't being made to feel cherished."

Before we hung up, Ms. Eckler drove home her message on this topic, as well as the theme of her book: "My daughter will say 'I love you' at the weirdest times. And that's how I think guys should be," she said. "They should be like children."

Easy enough. But then, wait a second: Are we supposed to be big babies or not big babies? I'm confused again. Wahhh.

Micah Toub is the author of Growing Up Jung: Coming of Age as the Son of Two Shrinks . 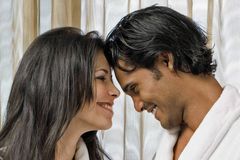 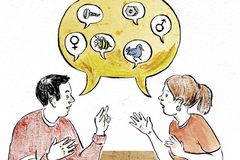